Villagers said that the radiation will have adverse effects on the health of the people. 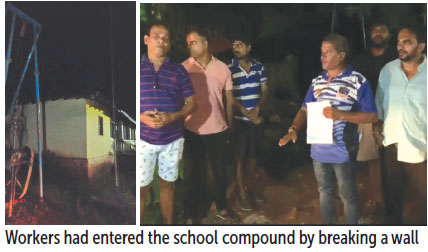 MAPUSA: After Nerul, Sodiem-Siolim villagers have now obstructed a telecom company's attempt to install a mobile tower next to a Government Primary School.

The residents of Maina in Sodiem halted the process of soil testing which was being carried out for the installation of a mobile tower by raising strong objections. On Thursday night, some residents including the former Sarpanch Nilesh Vaigankar came across two people digging land and using machinery near the school. When locals questioned the workers, they revealed that they were doing soil testing to install a mobile tower, and had obtained the required permission.  Vaigankar then went to inform and gather the villagers, but when they returned, the workers had fled with all their belongings.

The villagers found that the workers had entered the school compound by breaking the compound wall.

The documents produced by the workers stated that a Pune-based company has been issued permission to erect a mobile tower in Survey no 220/8 of Maina, Sodiem-Siolim, where they have to install a Ground Based Mast (GBM) and make it fully ready for commissioning within 60 days. Permission has been issued by the Executive Engineer, PWD-Road Section.

"Without any prior intimation, the company started the work, that too during the night. We don't want the radiation to affect the health of people, especially children. We request the Chief Minister to look into the matter and stop such activities," a local told Herald.

"The area where they are planning the tower has a government primary school, an Anganwadi, a Shishu Vatika, a church and is also a residential area. Upon enquiry, the workers fled from the spot.  They have filled the gutter and broken the compound wall.  How can the government authorities issue permissions for such a project? The head of the Government Primary School in the village, where the tower is planned, is unaware of this. The Chief Minister, who is also the Education Minister, should intervene in this matter and get to a concrete solution," Vaigankar told Herald. Villagers said that the radiation will have adverse effects on the health of the people.