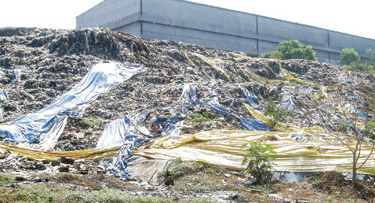 PANJIM: The High Powered Committee (HPC) meeting on the Sonsoddo garbage dump could not take any major decisions and only reviewed the ongoing works as the model code of conduct for the municipal elections came into force on Monday.

Chief Minister Dr Pramod Sawant, during his visit to Margao last week, had announced that the HPC constituted to finalise the setting up of a solid waste management (SWM) facility at Sonsoddo would be held on Monday.

All the HPC members met at the Minister’s Block, Porvorim and reviewed the ongoing work. The meeting, chaired by the Chief Minister, could not take any major decision due to code of conduct which came into force few hours before the meeting, Goa Waste Management Corporation managing director Levinson Martins said.

During the Assembly session last month, the Chief Minister had assured opposition members that he will convene a meeting of High Powered Committee before February 10, to resolve all issues related to the Sonsoddo garbage treatment plant.

He had also said that members, namely Leader of the Opposition Digambar Kamat, Fatorda MLA Vijai Sardesai and Curtorim MLA Aleixo Reginaldo Lourenco will be taken into confidence before finalising the SWM facility or treatment plant at Sonsoddo.

After the meeting, Kamat said a presentation was made about the measures taken at the Sonsoddo garbage dump site. He said that he has requested the government to incorporate the suggestions made by the members while preparing the overall plan.

During the meeting, Kamat also requested the government to shift the dry waste baling site put up at the old fish market as it had become a mini Sonsoddo dump and that Margao traders were demanding to shift it.

Kamat also suggested that instead of installing three bio-methanation plants, the government should set up one such plant and run it on a trial basis.

Sardesai also charged that the wet waste of 35 tonnes produced per day was not treated and was just dumped at Sonsoddo.

Lourenco said he was not satisfied with the HPC meeting when he had supported every government to clear the Sonsoddo dump. “I am not happy with what is going on there (Sonsoddo). Legacy dump has to be removed first,” he said, adding that after which a tender be floated to set up a new SWM plant.

It may be recalled that opposition members had cornered the government for its decision to set up 75 tonnes per day of integrated waste management facility at Sonsoddo in line with Saligao SWM plant instead of setting up seven bio-methanation plants of five tonnes each.

Waste Management Minister Michael Lobo had told the Goa Assembly that the ongoing remediation of the Sonsoddo garbage dump will be completed by May 2021.