TCP minister asks dept to also revoke all other “such type” licences; Save Old Goa committee want to see revocation order “in writing” 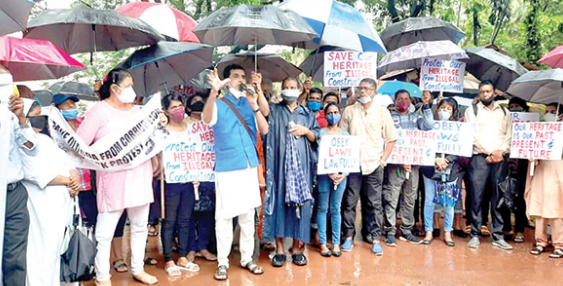 MARGAO: Feeling the heat of the citizens protesting the illegal construction project at the protected site of Old Goa, Deputy Chief Minister and Town and Country Planning Minister Chandrakant (Babu) Kavalekar on Thursday stated that he has already instructed the TCP Department to revoke the licence of construction.

Speaking to the media at Margao on the sidelines of inaugurating the Portrait Exhibition of Freedom Fighters organized by the Department of Information and Publicity under [email protected], he said that directions have been given to the department to inquire into the matter.

protect the heritage site of Old Goa, that TCP is involved in issuing permission to the owner of the alleged illegal construction project.

Without mentioning the name he also blamed a former TCP Minister for granting the permission.

“I want to make it clear that the permission given by the TCP to the concerned project is not during my tenure, but I have already issued directions to the department to inquire into the matter and revoke the licence, once it was brought to my notice,” Kavalekar said.

He added that as TCP Minister he has also given instructions to revoke all such licences issued by the department to the concerned parties.

The citizens from all parts of Goa and from all ages are currently on hunger strike protesting the construction project at Old Goa, demanding the demolition of the illegal construction next to St Cajetan’s Church.

------
SOGAC wants revocation order in writing
PANJIM: The Save Old Goa Action Committee (SOGAC) reacted cautiously to the statement made by Deputy Chief Minister and Town and Country Planning Minister (TCP) Chandrakant Kavlekar that the State government will revoke permissions to the controversial project that has come up in a protected area in Old Goa.
Pointing out that Kavlekar had already given this assurance to them in person nearly two months ago, SOGAC said they would wait to see the revocation order in writing.
“We welcome the statement from TCP Minister Kavlekar, which according to us is a very good beginning. That being said, our two demands persist,” SOGAC said in a statement on Thursday night.
The first one is for an order to be issued for the demolition of the building that has caused irreversible damage to the protected area of the Old Goa monuments.
“Secondly, have the TCP immediately update the Regional Plan for Goa (RP-2021) and all operational Outline Development Plans (ODPs), and mark all the notified protected areas, and buffer zones around all monuments in Old Goa. By updating, we are demanding that TCP show these legal zones in the operational plans (RP-2021 plus all ODPs) immediately to prevent further confusion,” SOGAC said.
“Section 17 of the TCP Act allows the government to ‘update’ the regional plans to reflect information that has been missed out (in the time between drawing the plan and the plan expiring). We recommend they use this section to quickly draw the protected areas and the buffer zones,” SOGAC added.
They opined that this should apply not just to the heritage sites in Old Goa but to all the 21 Archaeological Survey of India (ASI) sites and 54 Archives sites across Goa.
Giving a background, SOGAC members explained that the absence of these zones in the plans has caused huge confusion that has led to departments issuing permission to build, where, as per the law it can’t.
They say this loophole is being exploited by commercial interests. “In this case the Conservation Committee did a site inspection and found the proposed construction to be more than 100m away from the protected area, which is grossly untrue,” SOGAC added.
They further pointed out that as the boundaries and buffer zones are not shown, all permissions in alleged No Development Zones (NDZ) across Goa are being verified through site inspections.
They say that the TCP can learn from the CZMP process, in CZMP remote sensing technology has been used to mark high tide lines and buffers, which can’t be manipulated and that the same methodology needs to be carried out for heritage sites.
“Many other States have done this, the Delhi Master Plan 2021-2041 have used it, to great success” SOGAC added.
Meanwhile, the chain hunger strike at Old Goa entered its second day on Thursday with the protestors vowing not to withdrawn their ‘satyagraha’ until the building project that has come up in a protected area is demolished.
People from all backgrounds, age groups and religious affiliations extended their solidarity with the protestors at the site.
While no one from the government had come to meet them, the protestors said they are more concerned about steps that need to be taken to ensure that their demands are met.
They also said that the Old Goa has to be demarcated in the Regional Plan 2021 and that the village needs a master plan to preserve its rich heritage for posterity.
Related news