50% land grabbing cases reported in Bardez; Over one lakh and counting sq metres of land has been ‘robbed’ through manipulation and forgery 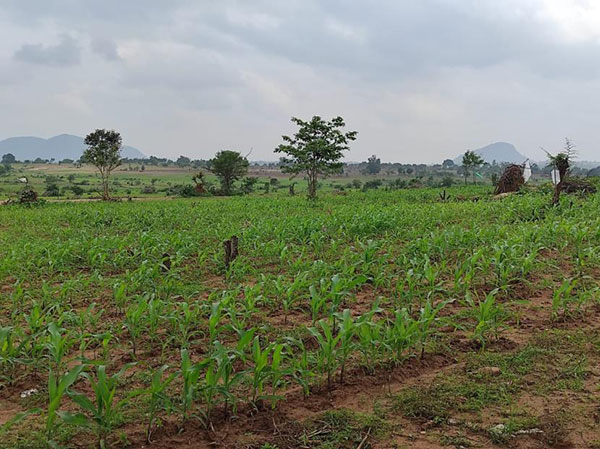 MAPUSA: While the Special Investigation Team (SIT) has made its first arrest in Margao in connection with a land grab case reported in Assagao, it is only the tip of the iceberg. However, the arrest is important since the home and epicentre of the scam is really Bardez.

Badem, Assagao, and Parra have reported the highest number of cases where more than 45 cases of land grabbing have been found amounting to more than one lakh square metres of land which is allegedly transferred or grabbed through wrong means. 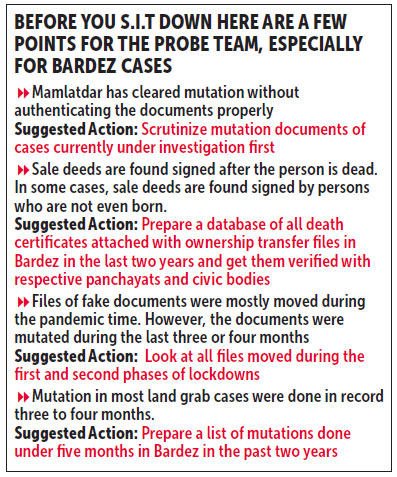 The other areas are Aldona, Tivim, Nerul and Porvorim.

Herald’s investigations and reportage really opened the Pandora’s box of this scam, which all knew of but no one was prepared to talk about. An investigation into how the landowners have been robbed of their land in all these cases is required on a war footing. 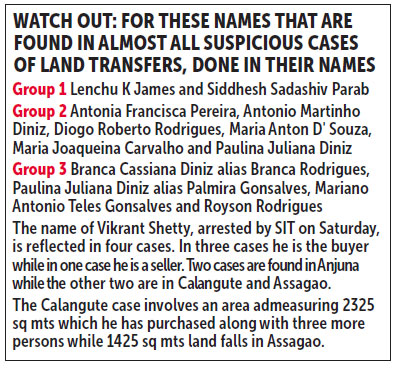 There are few names that are commonly found in almost 90 per cent of the cases and they are members of two families. One is resident of Borim, Ponda.  The culprits use the method of creating fake sale deeds in the Portuguese language and grab the property by transferring them to one of the member's names and then further sell the properties within themselves showing that the land is sold by providing different addresses.

Granting of mutation and having it registered in archives indicates that, Mamlatdar and someone in the Archives Department is in connivance, a complaint said.

In most of these cases, it is found that sale deeds are found signed either after the person is dead or making the person ‘alive’ after the death. Ironically, in some cases, sale deeds are found signed by persons who are not even born. These cases are not only haunting the owners who have now found out that their names are already deleted from the one and fourteen forms but also the people who are genuine sellers or buyers are also missing.

As per sources, these files of fake documents were mostly moved during the pandemic time. However, the documents were mutated during the last three or four months. While a common person has to run around for at least a year to get his or her documents mutated after following all the procedures, it is learnt that in such cases the mutation process was completed within a period of one or two months, sometimes even less giving a clear indication that concerned government departments officials or staff are hand in glove including the revenue, archives, and police.

It is also learnt from the sources that these people are Goans who are impersonating or doing fraud and grabbing the land in 99 per cent of cases. The same people are behind all the land grabs where they target the properties whose owners are not around for years and the property is left abandoned and is not mutated for several years.

In one such case, an application for mutation is filed on March 7, 2022, and by April 11, the mutation was granted. In a period of one month and four days, notices were served, allowed for publication, and granted mutation. Questions are raised because in a similar situation if a common person moves an application for a normal mutation it normally takes at least a year for the process to complete. However, in this case, where there were no NOCs and no addresses, the mutation was still granted within 34 days.

In another case, it is found that the owner was dead in 1943 however the sale deed of the dead person was found signed in 1957. This case is reported in Nerul where it is found that land was sold to two persons from Karnataka.

In yet another case, a sale deed was registered where it was mentioned that 23 different owners have sold 25 properties through a single deed of sale while in another case a person's documents were forged and the land was transferred when that person was supposed to be just five years old.

If these affected people approach the court then it will take at least 8 to 10 years to clear the matter. There are few owners who are senior citizens and are helpless. Instances have come in the open where the original owners are being threatened where the new buyer sends goons and threatens the owner not to enter into the property.

In one incident, a grandmother of a public prosecutor was made as to the power of attorney when she had already died. She died in 1979 and the deed was signed in 1996.

In one such old deed of 1951, the owners had sold the property even before they were born. Application for the mutation was put up before the Mamlatdar Bardez for mutation on March 7 and on the same day itself an affidavit was filed and the Mamlatdar had cleared it even though the signatures of the parties were missing. Notices were sent to fake addresses with no house number.

Herald will continue to monitor the investigation and unearth more and more cases of land grabs through its network of reporters and bring them to the notice of all Goans and the authorities.

Shetty was produced before the JMFC by the Special Investigation Team (SIT) of Goa Police, constituted to exclusively investigate land grabbing cases.

PI Crime Branch Satish Gaude prayed for Shetty’s remand which was granted by the JMFC.

Police sources said that Shetty will be interrogated.

It may be recalled that the SIT arrested Shetty from Gogol, on Saturday.

It is pertinent to note that the SIT has taken up investigation of two cases of land grabbing/transfer or land through forged documents.

Papers of 60-70 properties were forged in North Goa: CMO

PANJIM: The State Government on Sunday said that about 60-70 properties in North Goa District alone have been transferred in the name of prospective buyers by way of forged documents.

The Chief Minister’s Office (CMO) in a statement said that SIT has taken up investigation of two land grab cases for now.

The CMO informed that after interrogation, SIT found the involvement of accused person namely Vikrant Shetty in the crime, and accordingly he was placed under arrest on June 18.

“During investigation it was revealed that about 60-70 properties in North Goa District have been transferred in the name of prospective buyers by way of forged documents,” the CMO said.

On Sunday, Shetty was produced before JMFC, Mapusa and remanded to five days police custody. The CMO said that further investigation is in progress.

PANJIM:  Congress has demanded constitution of Special Investigating Team (SIT) to probe into over 1700 land conversions that were allowed under Section 16B of the Town and Country Planning (TCP) Act.

Addressing media persons on Sunday, the Congress  Quepem MLA Altone D’Costa, demanded that government should immediately set up SIT and investigate all the land conversions that were approved under controversial section 16B of the TCP Act.

“The TCP Minister is going into various illegalities in the ODPs. We request him to also investigate in detail into the land conversion approved under Section 16B,” he said adding that the Congress party has repeatedly demanded that the Section be withdrawn.

The Minister for TCP Vishwajit Rane had in April announced to review all the proposals that had either received provisional or final approval under Section 16B since 2018. He had said that a committee headed by the Chief Secretary will review all the permissions.