Mayem villagers say mining is not a lifeline but is putting lives at risk; People have been fighting ore spillage in fields, pollution by mining companies from 2004 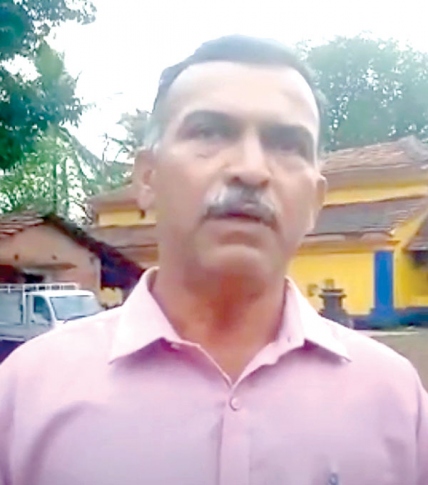 MAYEM: The stay ordered by the High Court of Bombay at Goa on the transportation of ore from the Mayem mines is a major victory for the people who have been fighting the spillage of ore in their fields and pollution by mining companies right from 2004.

For years now, about 400 trucks have been racing through narrow village roads, crushing their pipelines and keeping people without water. The villagers said that when they were proceeding legally, cases were filed against them by government officials and demanded that the cases be withdrawn.

Locals have stepped out and voiced their hardships due to the frequent movement of transportation trucks saying that if the government doesn’t listen to them, they will stand against the government.

Sakaram Pednekar from Mayem said, “We have been against mining for a very long time. Because of mining our fields are completely destroyed. The farmers faced a lot of losses. We went to the mamlatdar and spoke about our condition, we got justice for some of our cases.” 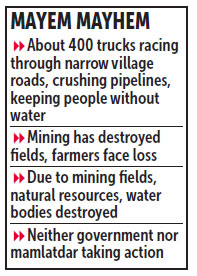 He said that they had to pay a lot for the losses and even fight to voice out their problems. Some of the cases are still pending and don’t move forward because of the long process involved. “The government is not taking any action and neither is the mamlatdar, the situation hasn’t improved,” he added.

“It's been two years but our requests haven’t been heard, the situation has turned so bad that we have to come on the streets for justice. The government is not hearing us out, probably because they might be involved, the government should have helped the people and taken immediate action, but there is no action taken from their side which only shows that their hands are full,” Pednekar said.

Villagers said that if ore has to be transported through the village, then it should from another side. They said that due to mining their fields, natural resources, water bodies have been destroyed.

“These trucks that transport the ore pass through our internal roads. This has not only resulted in dust pollution but our PWD pipelines are also damaged. Today even the PWD officials are fed up of continuously repairing these pipeline due to which were are living in thirst. People say that mining is the lifeline but our life is at risk,” Pednekar said.