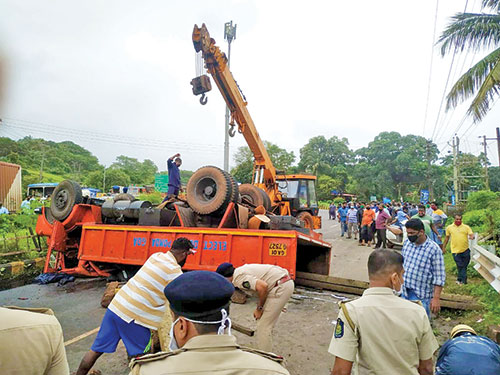 ponda: It may sound strange but the year 2020, which was hit by COVID pandemic with the lockdown during the early half restricting the movement of vehicles, witnessed more fatal accidents as compared to the 2019 in Ponda taluka.

In 2019, 284 accidents were reported wherein 27 people lost their lives, while 2020, which was hit by the pandemic, witnessed 227 accidents. However the fatalities increased to 30, as more than two fatal accidents occurred each month.

Ponda Police jurisdiction comprises 19 panchayats besides Dharbandora.  Besides accidents, 119 unnatural deaths were reported in Ponda in 2020 which included suicides as compared to 142 unnatural deaths recorded in 2019.

The sharp turns on roads, traffic rule violations by drivers, besides the non-wearing of helmets were some of the reasons, which resulted in these accidents.

Despite complaints from Pondaites, the authorities have have failed to rectify the dangerous ‘sharp turns’.

A sand-laden truck overturned at the sharp turn at Apewal last month.

Prior to that, a fatal accident that occurred at the sharp turn in June at Borim Circle wherein three electricity linesmen, were killed.

The locals demanded that the Borim panchayat submit a proposal to the concerned authorities to reduce the size of the circle and improve the road condition of Borim and Bythokhol circle.

But sadly despite assurances from the authorities nothing has happened. Recently, another accident was reported near Bythokhol sharp turn wherein a youth died after a truck collided with his two-wheeler.

In another tragic accident reported at Usgao in November last a youth and girl from Palim-Sanquelim died after ramming into a truck parked along the roadside.

In May last year, a rider and pillion from old Goa died on spot in a bike - truck collision at Kundaim- Marcaim bypass near the turn.

The dangerous sharp turns include two at Borim one near Borim Bridge and another at Bythokhol Borim. The sharp turn at Kundaim Junction is another dangerous spot.

According to Ponda Police Inspector Mohan Gaude, “Every driver must follow traffic rules. Not only in cases of suicides and other cases there is need for counselling of motorists and despite measures and fines accidents are on rise.”