Are accused of selling the pistol to the main accused; To be brought to Goa next week 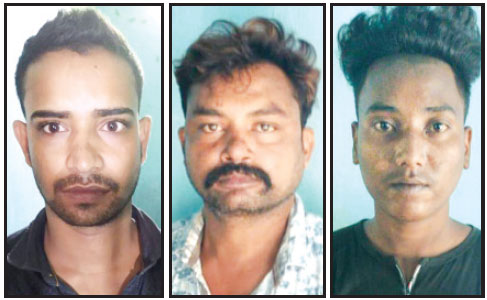 PANJIM: Three Bihar natives, who sold a pistol to two prime accused in the Margao jeweller Swapnil Walke murder case, have been arrested by Crime Branch (CB). Rahul Kumar, Shani Kumar and Kundan Kumar, all hailing from Begulsarai were arrested in a joint operation of Goa CB and Bihar police.

Their arrests come over 40 days after three persons – Evender Rodrigues, Mustafa Sheikh and Omkar Patil – were taken into custody for committing the crime in daylight on September 3.

Herald has reliably learnt that Rodrigues and Sheikh had confessed to the CB about procuring the murder weapon from the Begulsarai-men around June-July. “Both accused – Rodrigues and Sheikh – during the interrogation confessed to have travelled to Begulsarai somewhere in June-July to procure the pistol. They met these three persons who sold the weapon to the former,” an officer said.

CB contacted their police counterparts in Bihar seeking assistance to verify the identity of the accused and locate their whereabouts. Hereafter, a CB team was dispatched to Bihar to

While the investigation team succeeded in zeroing-in on the three accused, there has been much delay between the interrogation and the arrests in Bihar. The officer justified this stating that the absence of full-fledged resumption of train services due to the ongoing pandemic led to the delay. “Our team had to travel from Bihar via Delhi. Moreover, we had to ascertain the identity of the accused as well as other aspects linking them with the case in Margao,” he said.

The joint efforts led to the arrests of Rahul and Shani, whereas Kundan was in judicial custody for another offence. He was thereafter taken into custody for the Margao murder case.

On their arrival in the State, which is most likely next week, the accused will be subjected to further interrogation.