Photos of some unknown persons brandishing swords during a birthday celebration at the Goa Dairy, Curti go viral 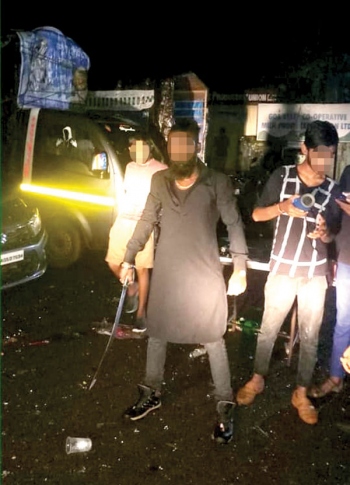 PONDA: Ponda Police on late Saturday night arrested Sanjay Kumar, Jabbir Shaikh and Salman Shaikh all in the age group of 25 to 30 years and some Ponda locals for forming an unlawful assembly and for being in possesion of weapons.

The arrests were made after photos of some persons brandishing swords during a birthday celebration at the Goa Dairy, Curti went viral on the social media creating a fearful atmosphere in Ponda.

Photos on social media also showed a person placing a sword around the neck of another person creating a terror-like atmosphere.

The Goa Dairy MD in his complaint said that the incident took place on August 4 at around 9.30pm after more than 10 persons assembled outside the Goa Dairy plant to celebrate a birthday but acted in miscreant manner.

Priolkar said the road in front of Goa Dairy is in its property and that the swords in the hands of the unknown persons are prohibited under the law.

He said there is movement of Goa Dairy vehicles, employees and also apprehended the safety of the milk producers, farmers, staff of the union, milk suppliers, contractors of Goa Dairy and other public who visit Goa Dairy premises and hence demanded action against the unknown persons.

Priolkar said, "How can these people roam here when Section 144 is in force due to Covid pandemic."

He said, "It is very likely that this group is trying to create terror or sending terror messages by such unlawful act with weapons and as a farmer's association we require to visit Goa Dairy during the night for emergencies related to Goa Dairy cattle," he added.

He demanded that police should take action based on the CCTV footages and recording of site.