On a pilot basis, WRD will undertake such construction at any of the on-going works running a span of 100 mtrs or so, to check its viability and porosity; Thereafter, Expert Members along with the State Biodiversity Board, will conduct a joint inspection, following which a final call will be taken 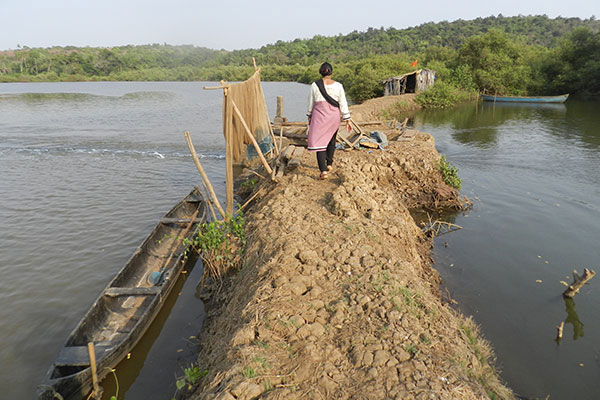 Panjim: Against the backdrop of the Centre’samendment to the Coastal Regulation Notification (CRZ) 2011 to allow the High Tide Line  in Goa to be demarcated along the bunds (embankments) along rivers and creeks, the Goa Coastal Zone Management Authority (GCZMA) has decided to construct eco-friendly traditional natural bunds for preserving and conserving marine life.

During its board meeting, which was held earlier this month, the Authority took this decision as a proactive conservation measure.

This entailed, directing the Water Resources Department (WRD) to undertake construction of traditional type bund at any of the on-going works running a span of 100 mtrs or so, to check its viability and porosity. This will be on a pilot basis.

“After ascertaining the strength as well as porosity, such bunds could be permitted for construction all throughout Goa in CRZ areas," GCZMA resolved.  After carrying out such civil works by specifying the quality and quantity of material used for the stretch of bund, the Expert Members and  members of the State Biodiversity Board will conduct a joint inspection, following which,  a final call will be taken.

"The Authority has got the mandate to protect coastal environment as well as to take anti-erosion measures," the minutes of the meeting mentioned.

During its discussion, the board members noted that at many places there have been breaches to the bunds, which has resulted in inundation of saline water in khazan lands. "These bunds have to be protected and/or restored in such a manner as was otherwise traditionally built by means of use of clay, hay, rubble stones etc," it added.

Over time, new technology has emerged, which is synonymous to the traditional methods such as the use of geo-textile material instead of hay etc. By and large, these bunds cannot be constructed using concrete because it can result in the destruction of marine biodiversity.