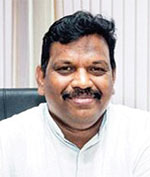 MAPUSA: The three tourists who died at Sunburn festival were due to drug overdose, said Ports Minister Michael Lobo.
Stating that three tourists died at Sunburn Klassique venue are due to drug overdose, Port Minister Michael Lobo said,
“I am hundred per cent confident that the three tourists who died at Sunburn Klassique expired due to drug overdose. However this drug is not sold inside the venue. I am on record for years that drugs are being sold within the vicinity of Anjuna, Vagator,” said the Calangute MLA.
Alleging that the Narcotic Control Bureau (NCB) controlled by the Centre failed to do their work, Lobo said, “NCB controlled by Centre is supposed to keep a check on drug activities. However, they completely failed to do their jobs. Police are giving their own version on these three deaths. They may send the viscera anywhere but we know that it’s 100 per cent due to drug overdose”.
“We cannot keep quiet because we have lost a human life. Tourists who come to Goa should feel safe. For this, steps have to be taken by the Centre through the Narcotic Control Bureau and the State through the Anti-Narcotic cell, Crime Branch, Anjuna police and SP North by getting hold on the suppliers and not only the peddlers. They should keep strict vigil in these places in Anjuna and Vagator”, Lobo added.
Stating that people should stay active and give info to police on drug activities, Lobo said “Giving info about drugs to the right person in the police department is the need of the hour. Earlier when such things were happening, the former CM Manohar Parrikar used to hold review meetings with officials due to which, sale of drugs was under control. We are responsible for the safety of the people as we are the elected representatives and assure people that such things will not take place again”, Lobo added.
“There are no possibilities that drugs are traded inside the venue. However, the peddlers talk to tourists outside the venue and to experience something new the tourists go for it and police need to catch these people”, Lobo added.
The DIG and SP North need to work on why raids are not being conducted in all the parts of costal belt, the minister said.
“I’ll inform CM to call for a meeting with all the senior police officials and discuss on what steps police need to take and places where they should act and be more vigilant and control the drug activities. Periodical reviews on this issue have to be held. We cannot turn blind eye towards this issue. If we do not take any action now then the situation will go out of control and people will face problem in the near future”, Lobo added.
Three people are dying due to overdose means adulterated drugs are being sold, the minister alleged.
“Police should check the phones of the victims, their call records and trace the peddlers and through them the suppliers. Police are falling short, especially the Narcotic Control Bureau which is not doing anything to control drugs on coastal belt of North,” Lobo added.
Related news