Traditional fishermen cast their net of support for Mhadei 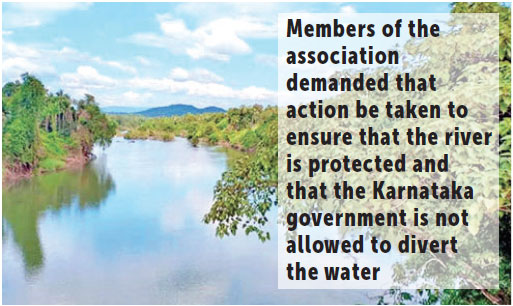 MARGAO:  The fight for Mhadei which is being taken to the Chief Minister’s doorstep at Sanquelim, has been strengthened by the pledge of support for Goa’s strongest sons of the soil and their families- its fishermen.

The traditional fishermen from Assolna, Velim, Betul and Chinchinim issued a clarion call of ‘chalo Sanquelim’, urging the public, especially the fishermen community to attend the mega public meeting on Mhadei that is scheduled to be held in Sanquelim on January 16.

Members of the association also emphasised on how important Mhadei river is to Goa and they demanded that action be taken to ensure that the river is protected and that the Karnataka government is not allowed to divert the water.

While addressing reporters Manu Cardozo, secretary of the association, Augustine Furtado, President of the Association, Seby Da Silva, executive  member of the association along with others like Sudhakhar Joshi from Betul, Remedios Crasto from Assolna, Milagre Leitao from Chinchinim and Anthony Da Silva from Assolna pledged their support to the movement to save Mhadei River.

They also urged the elected representatives to see that everyone is united and speaks in one voice as this is an issue that affects all Goans and that if Mhadei is diverted by the Karnataka government, the consequences to the State will be catastrophic.

The association members also called on the youth to participate in the protest at Sanquelim.

They also spoke about how their lives and livelihoods are linked to the rivers of Goa and that if Goa’s water resources are damaged, the fishermen too will suffer badly.

The Central government was also urged to take cognisance of the objections and demands of the public of Goa so that the approvals granted to the Karnataka government for Mhadei-related proposals are withdrawn immediately.