Citizens question govt on permitting train to Goa; Train will start from Delhi and halt at States that have Red Zones 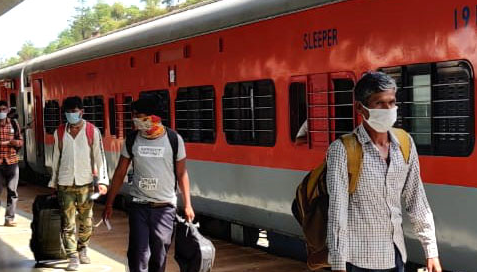 PANJIM: The Central government’s decision to resume limited regular trains to ‘Green Zone’ Goa from ‘Red Zone’ Delhi has not gone down well with residents of the State, who want Chief Minister Dr Pramod Sawant to not allow trains as it could be risky for the State in its fight against COVID-19.

Indian Railways will restart passenger train operations with special trains from New Delhi connecting various places from Tuesday. The train to Goa will start from Delhi on May 15 and will stop at Kota, Vadodara, Surat, Vasai Road, Panvel, Ratnagiri, Kudal, Thivim and Margao, many of which fall in States that have Red Zones. The train will ply once a week.

However, there is no clarity whether one can board the train at the stations where it halts, though the IRCTC website showed one can alight at these stops as it is accepting fares up to those stations.

This is a major threat to Goa’s ‘Green Zone’ status as the stations where trains would start and embark from are all in Red Zones like in Delhi, Rajasthan, Gujarat and Maharashtra.

Netizens are questioning the government and the Chief Minister on why he permitted trains to Goa. Hashtags like #covidtraintogoa were used on social media to oppose the decision. “Why does the government want to convert Goa from ‘Green’ to ‘Red’?”, an individual questioned.

“Trains are coming from Delhi to Goa, State government has allowed these trains to run on what basis? Has there been any mechanism set up to check the passengers alighting from the train. Are the people coming by those trains of Goan origin, who absolutely need to be here?” Porvorim MLA Rohan Khaunte asked.

Interestingly, the Chief Ministers of Andhra Pradesh, Telangana, Tamil Nadu and Chhattisgarh have said that resumption of trains will increase transmission rates and make contact tracing harder. They asked the Centre to push the resumption of trains back, warning that it would make it harder to identify, isolate and test suspected COVID-19 cases and could lead to chaos in their States.