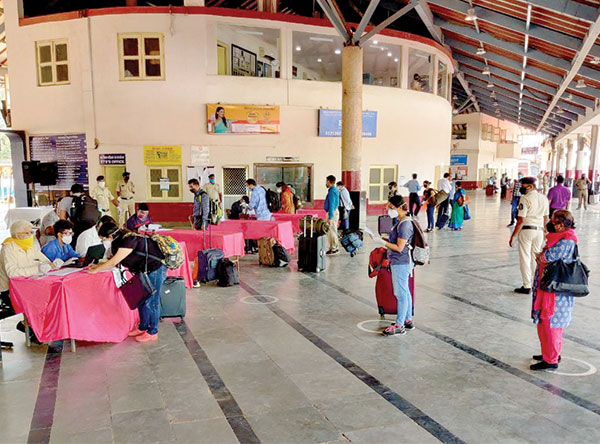 PANJIM: Goa reported an over 850 per cent rise in COVID-19 positive cases following the partial resumption of passenger train services since May 13. The State ranks second, only after Maharashtra, to witness such a surge in coronavirus cases.

As per data released by Union Ministry of Health and Family Welfare, the number of coronavirus cases in India saw a surge of 105.5 per cent since the resumption of train services from May 12 till May 26. The restart of train services led to a rush of people back to their hometowns.

Goa, which was declared coronavirus-free in April, after the recovery of all seven patients and with no new case being reported since April 3, reported seven positive cases in a single day, all of passengers who had arrived from train that originated in Delhi.

Since then the number of confirmed coronavirus cases in Goa has risen to 67 (including the first seven cases), an increase of 857.1 per cent. Currently, the State has 39 active cases, with 28 recoveries. Between May 13 and May 26, the State reported 60 cases, of which 90 per cent are train travellers.

Health Minister Vishwajit Rane on Tuesday said that Goa cannot remain insulated from the rising cases of COVID-19 in the country. He also said that the recovery rate in the State is very good.

The Opposition had been slamming the Dr Pramod Sawant-led government for allowing trains to halt at Goa stations.

TRAVEL BUG
- Currently, Goa has 39 active cases, with 28 recoveries
- Between May 13 and 26, the State reported 60 cases
- 90% of above are train travellers
Related news