Affected families allege no notice or letter received from North Goa Collector nor from Land acquisition department; Not informed about the demolition even orally; 2 minutes time given to vacate houses 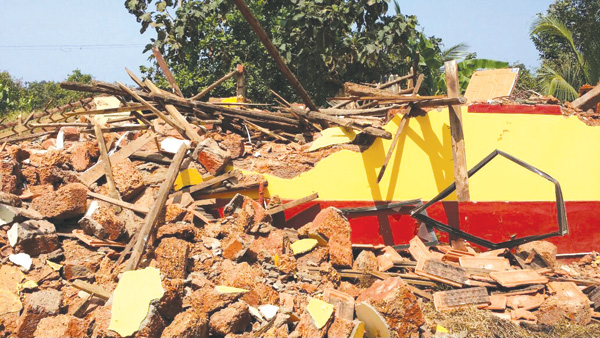 PERNEM: Pernem Mamlatdar on Friday executed the order of North Goa Collector Nila Mohanan by demolishing two houses which were located on the land acquired for the Mopa airport.
Sources said that these two houses were illegally constructed on the land acquired for Mopa airport. However, one Suresh Raghuvir Talkatkar and one Narayan Salgaonkar, the house owners, asserted that their structures were legal.
Suresh Talkatkar said, “We did not receive any notice or letter from North Goa Collector nor from Land acquisition department. We were not informed about the demolition even orally. On Friday, evening at around 6 pm, the officials came at the site and gave us two minutes time to vacate the houses. As we started removing the things out of the house, they started the demolition. In two minutes all we could save was the refrigerator. We are now left without a shelter with our belongings. The panchayat as well as the minister is involved in this demolition and now we have no one to whom we can approach for help.”
We are living here for five generations which is around 200 years. My ancestors were agriculturists which we continue doing till today; besides, we also take up daily wage works. We are a family of 10 persons and from Friday evening we are homeless,” Talkatkar lamented.
Narayan Salgaonkar, whose house was also demolished on Friday, said, “We have documents to claim that we are tenants of this land. We are residing here many years. We received no notice from the collector’s office. Also, the concerned talathi had visited us three days ago and had informed us that we would be issued demolition notice, but till today we have not received any letter or notice. When we approached the local MLA Babu Azgaonkar, he directly told us to go in court.”
The Narayan Salgaonkar family is of members including young children. The affected families are presently staying in a temporary plastic tenet.
The affected families alleged discrimination by the government saying that while 14 families of the Dhangar community who would be vacated from the land acquired for the Mopa airport are offered jobs and rehabilitation package, “we were denied the same benefits.”
Related news