The villagers have taken up the initiative as illegal sand extraction has taken its toll on River Tiracol, resulting in the increase in its depth and width, leading to washing away of agricultural land and plantations 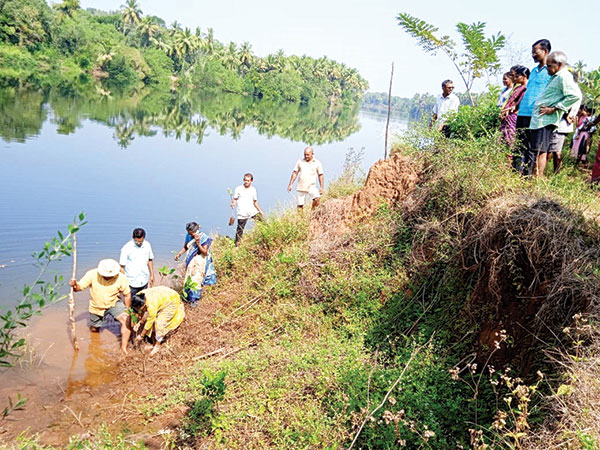 PERNEM:  With illegal sand extraction taking its toll on River Tiracol, Ugvem villagers took up the initiative of planting 500 mangroves (kharfuti) along the bank to preserve the river and protect their land and plantations from further destruction.

It may be recalled that the Herald had highlighted that illegal sand extraction along the River Tiracol resulted in the increase in the depth and width of the river, which led to washing away of thousands of square metres of agricultural land along with the plantations into the river.

Around 25 locals, mostly farmers along with few children took part in planting around 500 mangroves.

Former sarpanch of Mopa-Ugvem-Tamboxem Shashikant Mahale said, “The villagers resolved to plant mangroves along the River Tiracol bordering Ugvem village. In the past two decades, we have been battling against the illegal sand extraction and launched several protests, morchas and even wrote letters to authorities concerned but our efforts went in vain.”

He said that the mangroves have been planted with the only hope that it will protect the land and the river from further destruction and preserve it for future generations.

Mahale said that villagers have sacrificed their land for several government projects such as highway, Tillari Canal and Mopa Airport. Land was provided for several projects and what the people received was peanuts.

Pramod Mahale said that they have taken up the initiative of planting mangroves along the banks of the river under the guidance of Ugvem Farmers’ Association where they bought around 500 mangroves from the Forest Department.