Vaccinations & SOPs, not lockdown, are solutions to COVID surge: CM

Says lockdown would disturb economic situation when economic activities had just revived; Rules out increasing amount of penalty for not following SOPs 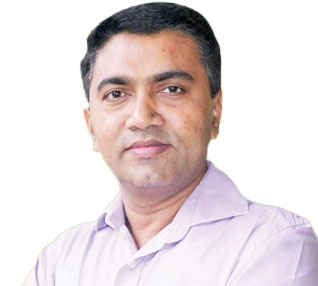 PANJIM: Stating that the last lockdown did not just lead to an economic slowdown but also an economic ‘zero down’, Chief Minister Dr Pramod Sawant on Wednesday emphasised that opting for a lockdown is not the solution for bringing down the rising number of COVID-19 cases in the State.

Addressing media persons after the State Cabinet meeting on Wednesday, Sawant said that vaccinations, along with maintaining precautions such as wearing masks and social distancing are the only solutions to dealing with the latest surge of COVID cases in Goa.

His comments were echoed by Minister Michael Lobo who argued that there can’t be a lockdown or night curfew in the ‘tourism State’ but suggested doubling the fines for not wearing masks.

The CM ruled out increasing the fine amount but said strict instructions were issued to police and Collectors to fine people not wearing masks in public places such as markets, bus stands etc and that the authorities will monitor these areas as well.

“A person can be fined more than once in a day too. He can be fined in Panjim and then if he moves to Ponda and is found violating the rule, he will be fined again. I have instructed the police stations to increase the percentage of people they are fining for violations of not wearing masks,” Sawant said.

He, however, agreed that the lockdown can bring a halt to all tourism activity and that it will disturb the economic situation of the State at a time when economic activities had just revived.

“Not just tourism but the general industry and other sectors like the pharmaceutical ones were affected during the last lockdown. There was a drop in GST collection too,” Sawant said.

He recalled the problems of the previous lockdown including the issue with migrant labourers where camps and transport arrangements had to be organised.

He also clarified that the government was not opting for decisions like imposing restrictions on travel and instead urged the people to venture out in public only if necessary.

He also appealed to the people to go for vaccinations and called on elected representatives to mobilise people in large numbers for the same.

“Once the people above the age of 45 get vaccinated, then coupled with the earlier phase of vaccination for frontline workers, nearly half of the State’s population will be completed. We want more and more people to do this as it will help the situation greatly. In the next phase, it will be easier for us to target the remaining part of the population,” he said.

He further revealed that he had written to the Health Ministry for relaxing the ‘eligibility’ age for people employed in the tourism and media industry. He said that he had done this so that people below the age of 45 in these two industries can also get vaccinated and spoke about how this will help keep employees of the hospitality sector safer.