Vaddem locals in fear with another landslide 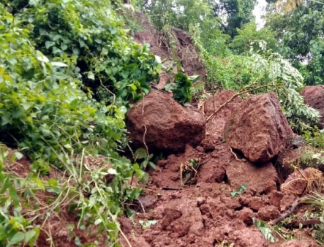 VASCO: Another landslide in Vaddem on Saturday has increased the fears of those residing opposite the Goa Shipyard.

Despite one senior citizen losing her life recently, the concerned authorities have not come up with any solution to protect the Vaddem residents.

Earlier a month ago, one old lady had died in her sleep after a huge boulder came rolling down on her house and she was crushed under it.

Raut also opined that the govt departments WRD and PWD have passed the ball into each other's court and the needed ground work has remained as it is.

The Mamlatdar has also expressed helplessness as the concerned authorities have been busy pointing fingers at each other, Raut said.

Residents from that area have also appealed to the authorities to help them at the earliest.