Dr Jorson Fernandes said that the principal ruling and opposition parties have, as usual, resorted to their buying and selling ventures. 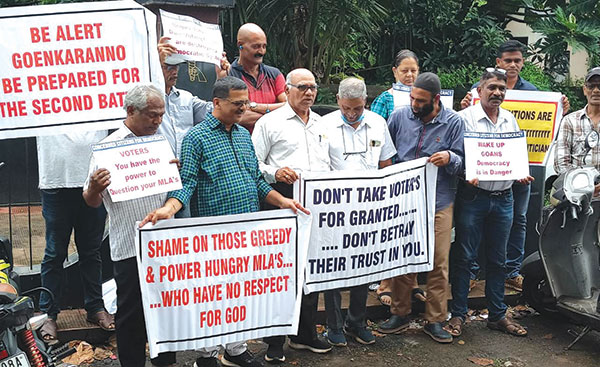 CUNCOLIM: Activists from Citizens Against Defections (CAD) staged a protest against  ‘the unruly and illegal defection culture that prevails amongst politicians’ in Cuncolim on Friday.

Savio Coutinho, who is spearheading the protests against defections, stated that all the new MLAs should be careful, ‘as a pied-piper is moving around, trying to convince the newcomers to follow them to the ruling side’.

"These first-time MLAs have to realize that they have finally made it to the Assembly with immense hardships and struggles. Any wrong decision will surely drown their political careers, while the pied-piper will laugh his way to the fulfilment of his hidden agenda,” Coutinho cautioned. He further questioned the integrity of defectors. “ When one is elected from a particular party that follows a particular ideology, how can you change sides and join the ruling party without taking voters into confidence?” he questioned.  “Those politicians who defect have no respect for their voters. If at all they want to change sides they must resign and then contest the elections,” Coutinho said.

"It is such a shame that our representatives have turned themselves to auctionable products, and every person getting sold in the auction needs to be permanently sent back home by the electorate," he stated.