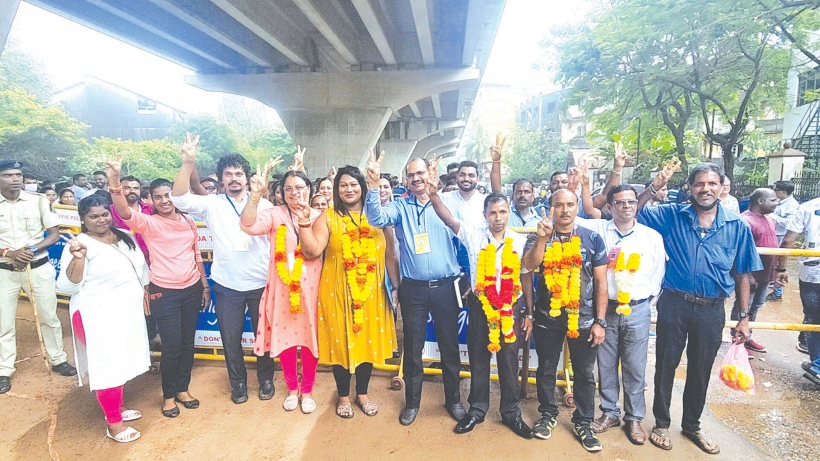 VASCO: A panel backed by NGO Goencho Ekvott, which is spearheading the protest against the railway double tracking work swept the panchayat elections by winning five wards in the seven-member Velsao-Pale-Issorcim Village Panchayat on Friday.

At the same time, Goencho Ekvott had the mortification of seeing outgoing Deputy Sarpanch Sylvia D’Souza, who had contested from a different ward defeated while her brother-in-law Jim D'Souza emerged the winner from her earlier ward against a candidate supported by the Goencho Ekvott.

Soon after the results were declared, Congress leader and Goencho Ekvott member Olencio Simoes said that all five winners have been vehemently opposing the railway double tracking work in the village. He said that the Velsao-Pale-Issorcim Village Panchayat was the first Village Panchayat to file a petition against the South Western Railway (SWR).

Simoes said that initially the Goencho Ekvott-backed panel was reluctant to contest elections but the villagers insisted that they needed a change and managed to sweep the elections by defeating the panel supported by the Bharatiya Janata Party (BJP). He said that the panchayat members-elect will strive to make the Velsao-Pale-Issorcim Village Panchayat a model village across the State.

Another Goencho Ekvott member Orville Dourado said that one of the reasons for them to field a panel of candidates was due to harassment of senior citizens by the authorities trying to acquire their land for the railways double tracking.