The underpass is in the vicinity of several schools and colleges, and is frequented by students who are now at risk of picking up an infection from the filthy stagnant water; sewage dept officials claim it is regular water 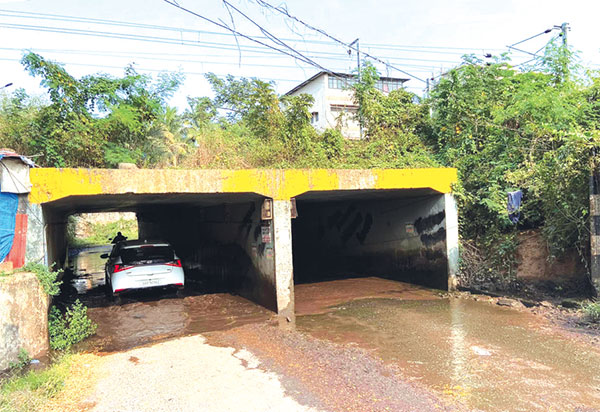 MARGAO: Motorists who ply the busy vehicular underpass in Comba, Margao, have for the past several days been forced to slosh through filthy water that has collected on the stretch. Complaining about the stench from the stagnant water, locals claim it is sewage that is constantly seeping into the subway, putting all those who pass by, especially two-wheeler riders, at risk of infectious diseases.

Despite these complaints, officials from the Sewerage Department claim the stagnant liquid is not sewage, but regular water. When Team Herald visited the site, it was apparent from the foul odour that has enveloped the area that sewage has seeped into the subway, causing major hardships to motorists, as well as the hundreds of students studying in the educational institutions in the vicinity. The stagnant waste water has been seen for several days now, but the authorities have failed to initiate any action, leading to the muck being spread along the street by vehicle tyres.

Citizens are of the strong opinion that a leak in the sewage pipelines has caused the waterlogging of the subway. Sanjay Dessai, a resident of Margao, told Herald that he has personally witnessed the situation and warned that it could pose a major health hazard, if necessary measures are not initiated immediately.

“The stink due to the sewage water which has accumulated in the subway is unbearable and the situation has been getting worse over the last few days. No one can deny that it is sewage,” he claimed.

He added that the poorly-planned sewerage network has resulted in the pollution of the whole Comba area.

“There are several educational institutions located around the Comba subway and students, besides the general public, use this subway on a daily basis. It is high time that the authorities concerned take this issue seriously or it may lead to several health issues in the locality,” he cautioned.

However, Prakash Pai, Executive Engineer of the Sewage Department denied that the stagnant water in the subway is sewage or septic waste.

“We had conducted an inspection at the site and it was found that it has no connection to a sewage leak. The water that has accumulated here may be because of the ground water level in the area,” he claimed.