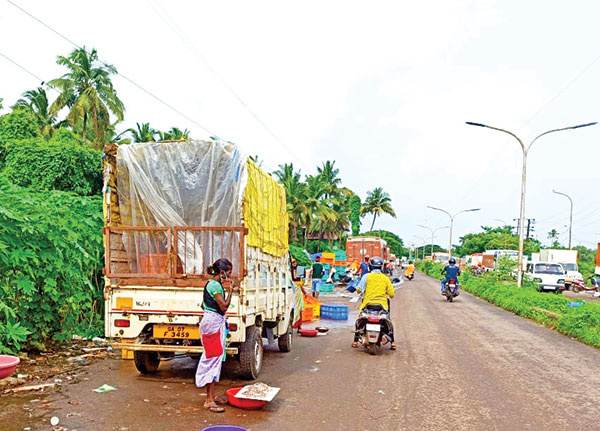 MARGAO:  Traditionally, the Margao market was of the Ramponkars, Magkars, Catalkars and Goan traditional fishermen (khari). Today, the wholesale fish market has been gulped down by the traders and their yes men.

On the face of it the Wholesale Fish Market is controlled by the South Goa Planning and Development Authority (SGPDA). However, the reality is different. The market is now controlled by the wholesale fish traders and they are influencers of the decisions of the PDA.

A huge gap is seen in the statements of the wholesalers and the actual reality that happens on the ground. The ground situation is this. The wholesale fish market will open today for trade. 100s of trucks filled with fish will come to the market but only few will get a place inside the market. What happens to the others? They will find a way to sell fish outside the market, untested, will make a killing and flee.

The Wholesale Fish Traders Association led by Moulana Ibrahim claimed that there will be no sale of fish during the market closure period and claimed unanimity from the entire association. 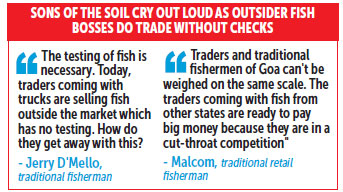 That statement had nothing to do with reality. As the market remained shut several fish traders parked their vehicles on the sides of the roads and sold their fish. There was no testing of the fish.

When the SGPDA said that testing of fish is necessary, the traders said the markets should remain shut. At the same time trucks were allowed to enter. AND SGPDA said that they couldn’t do anything to stop the trucks entering the state. In effect, the wholesale traders got their trucks in and sold outside the shut markets, conveniently without formalin checks. This certifies the fact that there is absolute control of the traders over the trade.

Traditional fishermen, sons of the soil are naturally upset. Jerry D'Mello, a traditional fisherman said "The testing of fish is necessary. Today, traders coming with trucks are selling fish outside the market,which has no testing. How do they get away with this?" asked Jerry.

A Goan fish trader Malcolm said, "This is because there is no coordination between the departments that are responsible for hosting the sale and giving safe fish to the people of Goa. Traders and traditional fishermen of Goa can't be weighed in the same scale. The traders coming with fish from other states are ready to pay big money because they are in a cut-throat competition.

"Traditional fishermen when given incentive will grow and the monopoly of the traders will be over" he said.

It is a fact that besides the SGPDA, there were some unknown unregistered persons who were collecting money from the trucks coming for trade.

An average calculation, considering 7 tonnes of fish in a truck; and a lesser amount of fish coming from Andhra and Orissa through small rickshaws and mini trucks, reveals the size of the trade at the Market which happens in a matter of hours. At an average pricing of 300 rupees per kilogram and 70 vehicles per day the trade runs to several crores and the SGPDA is getting literally peanuts out of the same.

There has been an absolute monopoly of the fish traders in the wholesale fish trade of Goa, which has resulted in the natural death of local fishermen and their business. The pattern of business by traders is clear-flooding the market with fish which leaves little room for others to survive.

It may be recalled that Goa and Goans were shaken after traces of formalin in the fish coming from outside the state was found. After several hardships, there was a testing facility installed on the border.

Herald has recently exposed in its spot report, from the Goa Karnataka border, how this testing is a mere lip-service bordering on a sham.