Woman and accomplice arrested; 7-year-old daughter is prime witness to the case 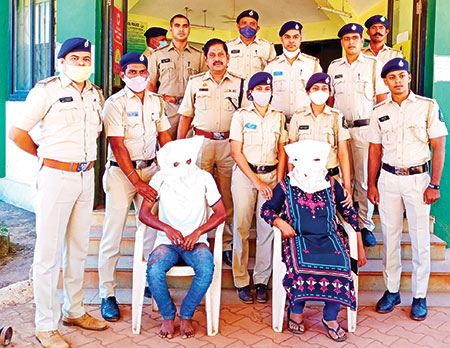 PANJIM/ANJUNA: Against the backdrop of a series of crimes in the State, a botched ‘murder for hire plot’ at Siolim has sent shockwaves across the State. A woman and the hitman from Karnataka have been arrested in the gruesome murder of two lady senior citizens in the otherwise tranquil coastal village.

Rovina Lobo and Subhan Rajyaballi have confessed to the Anjuna Police of having brutally killed Marta Lobo (64) and Vera Lobo (62), the unmarried aunts of complainant Julio Lobo, who is the husband of Rovina, the prime conspirator.

The motive behind the murder on Sunday, prima facie, appears to be constant bickering between the two senior citizens and the woman.

Sources said that Rovina did not share a good bond with her husband, with whom she had a love marriage in 2013, and his unmarried aunts. Police sources told Herald that constant differences between them prompted Rovina to plan the double murder about three weeks ago.

“She was fed up and couldn’t live there any longer, which is why she planned to kill the aunts,” the source said, quoting Rovina’s initial confession to the police.

While several facts of the case are still being ascertained, it is learnt that Rovina encountered the daily wager from Karnataka during this period. “She asked Subhan if he would execute the crime along with her to which he agreed,” the source said. The police have denied a contract killing theory even as the woman supposedly promised the youngster of a few thousand (less than Rs 50,000) to help her kill the elders. “As she has confessed, she wanted to end the constant bickering between her and the two victims. As such, she planned the murder,” the source revealed.

Herald has also learnt that the family had knocked the doors of the Anjuna police over a ‘domestic dispute’ but it was settled without a FIR being registered. “It was not a serious issue,” the police source said, adding, “The victims had complained about Rovina and vice-versa. All the parties were called to the police station and the matter was resolved.”

The pre-planned murder did not see a proper execution which led to the instant identification and arrest of the accused. Rovina, who with the help of the youngster smashed the women with koitas, had left their bodies on the chair in the house. The police also have an eye-witness to the incident – the main accused’s seven-year-old daughter. She is currently in the safe custody of her father.

“Rovina had switched the lights off on Sunday night after which Marta stepped out to check what was wrong with the power connection. She attacked Marta with the koita, followed by Vera. Subhan abetted her… Rovina had kept him in hiding at an under-construction structure close to her in-law’s family house,” added the source. “Rovina’s husband was not in the house when the two accused executed the crime.”

Superintendent of Police (Crime Branch) Shobhit Saxena, who is holding additional charge of North District, visited the crime scene and the police station to monitor the case investigation.

Speaking to the media at the PS, he said, “The incident was reported by Julio, the husband of the accused lady stating that his wife along with one unknown person killed the two ladies. Immediately a team of Police headed by Mapusa SDPO Gajanan Prabhudesai, Anjuna PI Suraj Gawas, Mapusa PI Tushar Lotlikar rushed to the spot. Upon reaching it was found that the two ladies were dead with severe head injuries and the accused persons had fled from the crime spot after committing the crime. Since it was a murder case, forensic experts team and dog squad service were also pressed in.”

Further, two teams were formed and a search operation was conducted and within two hours of the crime  the accused Rovina along with Subhan were arrested from Assagao.

Saxena further said that the police have recovered two murder weapons at the instance of the accused. The koitas were thrown in the jungle.

Meanwhile, sources said that the two deceased women and Julio, were staying in a single house at Ingroz wado, Marna Siolim, which is located in an isolated area with hardly any neighbours.

The two accused are facing charges under Section 302 (murder) read with 34 (common intention) of the Indian Penal Code. They are remanded to seven days of police custody. “We are ascertaining various inputs/angles arising out of the investigation,” said an officer.