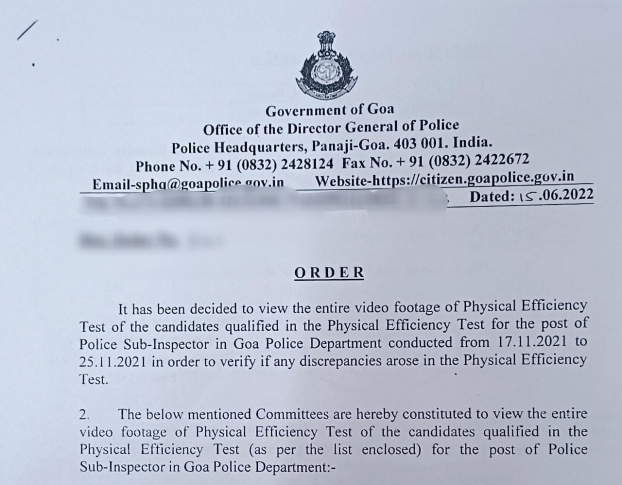 PANJIM: The Goa Police finally launched an inquiry into a purported mega recruitment scam of police sub-inspectors (PSIs) by constituting five committees, each headed by a Deputy Superintendent of Police (DySP).

The department is facing severe criticism over the ongoing recruitment drive of PSIs amid allegations of rigged physical efficiency grades.

In the order issued on Thursday, the Office of Director General of Police ordered the committees to 'view the video footages of physical efficiency test of candidates.'

Sources said each of these committees will be headed by DySP, who will then prepare a report to be submitted to the government for further action.

The government had advertisements filling up posts for PSIs, constables and home guards in March 2021 recruitment drive which began soon thereafter.

However, the physical tests came under the scanner following allegations that those who cleared the test were categorised as failed candidates while candidates who did not meet the criteria were passed. The video footage allegedly confirmed the manipulation as an internal inquiry was carried out.

Several complaints were filed with the department accusing scams in the recruitment and seeking a fresh process to recruit candidates.

Sources said the government spent around Rs 70 lakh for the physical efficiency tests which were carried out at five venues - Ponda, Valpoi, Margao, Panjim and Altinho. The Sports Authority of Goa officials were also involved in the tests while each venue had a separate committee headed by SP monitoring the physic test.

The allegations pertain to the physical tests of male candidates at four venues.