‘Govts to blame for errant taxi-walas’

Long queues of black-and-yellow taxis and white tourist taxis at the airport and railway stations are a common sight. Their presence at the arrival and department points seems to be welcoming passengers but the intention is otherwise - monopolising the business, which once upon a time was meant for providing self-employment to unemployed youth of Goa.

Their rage is not against GoaMiles only but the taxi drivers do not accept even private vehicle owners picking up their friends, friends or relatives.

Their “welcome gesture” is not restricted to airport and railway stations but it has now stretched to luxurious hotels as well. Here’s an ordeal by a Goan himself who was literarily stopped from entering an expensive resort by the taxi lobby stationed around the premises.

“I have received threat from the taxi lobby. Just recently, I had a friend who arrived to Goa with his family on a holiday. They checked in to a pre-booked resort where I decided to meet them. To my shock, an entire taxi lobby stopped my car at the entrance of the resort asking me all sorts of questions. I confronted them in our mother tongue Konkani. This is just one instance where taxi operators have been fleecing people,” a city-based businessman told Herald as he recalled his ordeal.

The businessman, also a veteran in the tourism industry, has called for a massive awareness and public outcry to tighten the noose around the tourist taxi operators. He also alleges hotel industry, if not all, have an unofficial tie-up with the taxi operators to ensure their clients do not avail service outside their boundaries.

Sanjeev Sardesai, a former Secretary of then Travel and Tourism Club (now Travel and Tourism Association of Goa) has slammed successive governments for failing to deal with the errant taxi-walas. The entire issue has been prevalent over four decades now.

The social media is often abuzz with debate on inflated taxi fares and rude attitude of drivers that has given sour memories to many visitors. Many have left after experiencing a bad holiday in the otherwise a tourist-friendly State.

The taxi operators have blatantly refused to install taxi meters while vehemently objecting to the presence of app-based aggregators. After many threats to protest on the streets of Goa, they held the State to ransom by resorting to strike demanding revocation of permission to GoaMiles mid this week.

The strike at Azad Maidan, permission of which was revoked by the North Goa Collector for violating Section 144 CrPC, reminded of the tensed situation in January 2018. All hell broke loose as commotion ensued in the State, with around 20,000 taxis going off the road on January 19, 2019 despite repeated requests from the government ‘not to kill the golden goose’ called Goa Tourism. During the three-day strike, many tourists faced hardships even as the government pressed into service additional vehicles including Kadambas, local and inter-State buses, as alternate mode of transport.

The strike then was opposing entry of GoaMiles, which miserably failed and the 2021 strike is demanding to scrap GoaMiles. While government is stubborn to allow GoaMiles, it is also considering increasing minimum fares in a possible attempt to influence the taxi operators. Transport Minister Mauvin Godinho this week said the State Transport Authority would soon take a decision to increase the minimum fares of taxis in the wake of high fuel prices. But the adamant taxi drivers have an excuse to continue their strike although in violation of the Collector’s order. 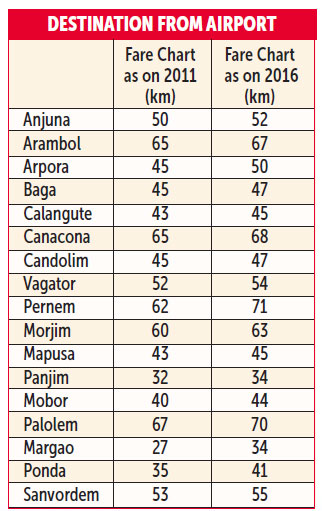 Another businessman Rohan Govekar has slammed the government for already allowing ‘high price’ as fares. “The government has a regulated fare but that too is high. Despite the high fare, the taxi drivers charge exorbitant fee from their customers. Why does the government allow this,” he questioned.

Govekar, also echoed the anonymous businessman’s ordeal about how the taxi operators dominate over other transport system, particularly in South Goa.

Sardesai said that Goa has the highest taxi fare compared to rest of the country. “Goa has got the highest per km rate as compared to any State in India. People have posted on social media how they are robbed by the taxi drivers but departments are not taking any action. If people are being fined and asked to follow rules, then what stops these authorities to stop licensing of tourist taxis for all the violation they have been doing,” he said.

The tourism experts also question on why government does not cap the number of taxis operating in the State. “This is typical of an individual going to RTO for a two wheeler, getting the licence and completing the formalities but on the road, the rider refuses to wear helmet. Why, in the case of taxis, the operator purchases the vehicles and later laments over parking. They should be taken to task for parking in the city,” he added.

As per the rule, the taxis cannot park in the government allotted parking space as the government directs them to make their vehicles available at the address mentioned in the permit whenever required by the hirer.

Mousinho Reis, the industry veteran who has done a detailed study on the issue, also said that taxis are not supposed to be at the parking slots but instead should be at their residence, as per the permit. “Tourist taxis are supposed to be associated with the hotels, tour operators and travel agents and carry a voucher that they are on a business trip. Secondly, they are occupying the parking space in Panjim purely because of which the other vehicles find it difficult to get their rightful place to park,” he said.

In their usual statement, taxi union leader Bappa Korgaonkar demanded scrapping of GoaMiles only after which they are willing to hold discussions with the government. “We are ready to hold discussion on the fixed fare rates but after scraping of GoaMiles. Any decision should have our consultation,” he said justifying charging expensive fares. “Why others in the tourism and hospitality sectors are not quizzed on increase their charges. Why are we cornered over this issue,” he questioned.