The Indian Navy celebrated the 61st year of the raising of its largest naval aviation base INS Hansa, Goa on September 5. The base has played a critical role in terms of protecting the nation from external threats. It has also rendered its services during natural calamities and pandemic outbreak. SHASHWAT GUPTA RAY charts the illustrious journey of this vital military base in India 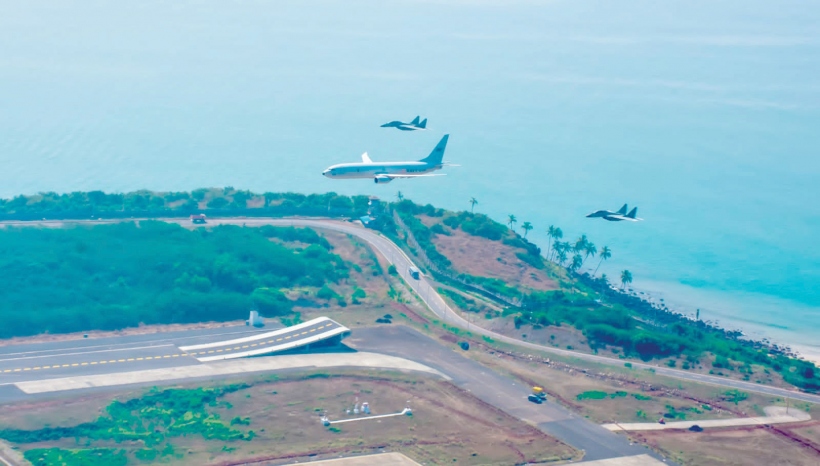 INS Hansa was commissioned on September 5, 1961, at Sulur in the state of Tamil Nadu. Post liberation of Goa in December 1961, INS Hansa was transferred to its present location at Dabolim. Since then, it has become the largest Indian Naval air station, very critical and the busiest military airbase in India.

The illustrious history of INS Hansa dates back to the modest foundations, laid sixty-one years ago. From a modest beginning with a handful of aircraft in 1958, the base has taken a quantum jump by acquiring assets along with technological advancements to augment Fleet operations at sea.

INS Hansa has increased its prowess over the last six decades and is presently operating over 44 military aircraft, clocking an average yearly flying of over 6,000 hours. The air station also supports civil aviation by handling domestic and international flights 24x7, with an average of 29,000 flights in a year.

Last year on September 6, INS Hansa was bestowed the honour to host the prestigious award of President’s colour to Naval Aviation.

“Our country has a vast coastline and required the creation of a strong and professional Navy, capable of meeting all operational requirements for defending India’s Maritime Interests,” Commanding Officer of INS Hansa, Commodore Ashish Bhargava said.

Presently, Indian Naval Aviation operates out of nine Air stations and four Air Enclaves on the Eastern and Western Seafront, and on Andaman and Nicobar Islands.

INS Hansa forms an important segment of the Navy's combat power and has played a crucial role towards effective Naval operations on the western seaboard.

“With the available multirole capabilities of aircraft, the station has been successfully accomplishing all operational commitments entrusted on us,” Commodore Bhargava said.

The naval base saw its first operational deployment during ‘Operation Vijay’ in 1961 which resulted in the successful liberation of Goa.

“The commissioning of, Majestic Class aircraft carrier INS Vikrant, in 1961 catapulted us into the elite group of Navies that operated carriers. The air element comprised a squadron of Hawker Sea Hawks fighter-bombers of INAS 300 and a squadron of the French Alize anti-submarine aircraft of INAS 310,” the CO of INS Hansa said.

During the 1965 Indo-Pak war, the Sea Hawk and the Alize aircraft squadrons were entrusted with the Air Defence of Bombay, Goa and Cochin.

INS Vikrant took part in the Indo-Pak war in 1971 and its aircraft were instrumental in sinking and incapacitating most ships in Chittagong harbour and at the Ports of Khulna and Cox Bazar during their bombardment from December 4 to 10 1971.

The base has also contributed immensely in aid to civil authorities providing search and rescue, flood relief and supporting community activities.

“As you are aware, in September 2019, this station undertook Operation Rahat, saving people stuck in floods in Maharashtra and Karnataka. In the year 2020, the station flew numerous flights under the Vande Bharat Mission during global covid lockdown,” he said.

The unit has a unique distinction of managing both civilian and naval air traffic every day, with utmost efficiency and safety. This has helped to promote tourism and boost the local economy.

Over the past six decades this unit has grown from strength to strength to a formidable set of aircraft, contributing to all facets of naval operations, across all dimensions of warfare, during peace, low-intensity maritime operations and in war. “Today we are a potent force comprising shore-based long-range maritime patrol and anti-submarine warfare aircraft, Fighters, integral ship-borne helicopters, and above all, motivated and focused professionals, who have developed and honed their skills over the decades into a highly effective arm,” Commodore Bhargava said.

The air base derives its strength from the various branches such as Air Traffic Control, Navigation and Direction, Meteorology, Medical, Electrical, and Logistics that work tirelessly and seamlessly with Air Technical Officers; men and aircrew to achieve safe and efficient flying operations.

INS Hansa has been proactively involved in various initiatives toward a clean and green Air Station during the past year. The Air Station has undertaken various measures for compliance with biomedical and solid disposal of waste as per national norms through the installation of an Organic Waste Converter in residential and technical areas.

In addition, the segregation of waste at the source is being practised daily for efficient waste management. Further, the unit also has an operational Sewage Treatment Plant, incinerator and industrial shredders for waste disposal.

Towards efficient energy and environment management, the Air Station has installed solar and timer-based street lights for energy conservation. Further, a provision of solar power voltaic of 01 MV capacity has enabled the main power station to distribute the renewable source of energy to the entire Air Station.

On the future plans for strengthening the base, the CO Hansa said, the Indian Navy has invested significant effort in meeting all regional commitments and furthering our diplomatic engagements with friends and partners in the Indo-Pacific.

Over the years, the base has become a force to reckon with to ensure the security of the entire western seafront including offshore assets and undertakes extensive surveillance to neutralise any threat from the sea. With round-the-clock operations for surveillance and other operational taskings, the station remains vigilant and steadfast in meeting all National Objectives.

“We have been in service since last 60 years. Be it war or peace INS Hansa has been in the forefront of serving its countrymen at all times,” the senior naval officer said.

For last 60 years, INS Hansa has been the mainstay of Indian Navy’s air operations. More than 35 aircrafts are in the frontline having presence from Gulf of Aden on the West up to the Persian Gulf and the Indian Ocean in the South.

“In these 60 years, INS Hansa is countered and overcome any challenges. The naval base saw its first operational deployment during ‘Operation Vijay’ in 1961 which resulted in the successful liberation of Goa,” he said.

During the 1965 Indo-Pak war, the Sea Hawk and the Alize aircraft squadrons were entrusted with the Air Defence of Bombay, Goa and Cochin. INS Vikrant took part in the Indo-Pak war in 1971 and its aircraft were instrumental in defeat of East Pakistan armed forces.

In recent times, the premier naval base was involved in undertaking extensive flood relief operations in Maharashtra and Karnataka under Operation Rahat and transporting hundreds of suspected Covid samples from Goa to Pune for testing at the National Institute of Virology (NIV) and back.

Speaking about COVID operations, the CO said that no one knew much about the virus.

“But our men and women have done a fantastic job. I take pride in leading such a motivated team. I would give complete credit to the Naval values of Duty, Honour and Courage which are imbibed in each one of us. The motivation is high and the men and women don’t shy away from challenges. We believe in doing our duty and doing it well,” the CO Hansa said.

Be it responding to heightened security situation, natural calamities or pandemic outbreak, INS Hansa is ready to deal with any eventuality.