‘Janumani’ walks away to freedom

A day prior to World Elephant Day, a team of Goa forest department officials shifted 40-year-old elephant named Janumani onto a large truck from a spice farm in eastern Goa, where she had been held in captivity for 17 years, to the Karnataka State Forest Department’s Elephant Care Facility. There she will live with freedom and dignity. NORMA ALVARES, president, People for Animals, Goa and ALOK HISARWALA GUPTA, Centre for Research on Animal Rights chart the journey of Janumani from captivity to freedom 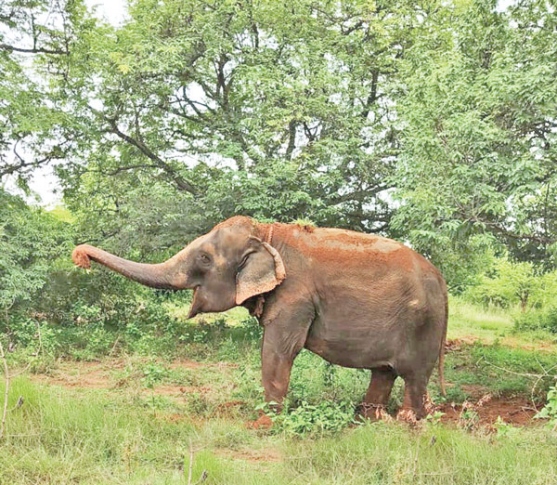 While the people of this country are about to celebrate the 75th year of their freedom from the clutches of British rule on August 15, an elephant named Janumani tasted its freedom on August 11 from captivity for nearly 20 years, a day prior to World Elephant Day, which is observed to create awareness on the need to conserve and protect elephants from the numerous threats they face.

The elephant’s freedom was supervised by a team of Goa forest department officials, led by Santosh Kumar, the state’s chief wildlife warden.

The officer was acting on the basis of a High Court order passed earlier which required him to ensure the animal reached its destination – the Karnataka State Forest Department’s Elephant Care Facility (ECF) – in the shortest possible measure of time.

He also had with him all the necessary transit orders issued by the JMFC, Panaji, which enabled him to navigate the thorny thicket of wildlife regulations that control the movement of every animal listed in the schedule of the Wildlife Protection Act, 1972 across state boundaries.

Travelling non-stop for 18 hours, Janumani was delivered safely to her new home, a large secluded elephant pasture, adjacent to a forest. When she opened her eyes on World Elephant Day, she must have felt she was dreaming. Elephants are known for their memory. She had been taken out from her original habitat, also forested, in Assam, several decades ago, and was now, in a sense, returning to something similar, for the balance of her natural life. And for the first time, caretakers who were responsible for the elephant’s well-being were now in-charge of the mammal.

Janumani’s story would make anyone’s eyes misty. A wild elephant, captured from Assam’s forest, she ended up first at the infamous Sonepur animal fair in Bihar. From here, she was transported to Goa in 2005, all of 21 years. (Life-spans of elephants range between 45-60 years.) Janumani survived 17 years in Goa, mostly tied to a tree under a tarpaulin sheet for a roof, just outside the spice farm where she became an amusement for tourists. Elephants are gregarious animals. Keeping them tethered alone and to themselves is inflicting another form of misery.

Occasionally, Janumani left the farm. She was sent for temple rituals to Karnataka and Maharashtra, or the Ayyappa temple at Vasco. She was also rented out for destination beach weddings. Draped in ornate fabric, she would be transported to the venue in jolting trucks, or even forced to walk on foot, often without food and water. Hundreds of wedding guests would line up for selfies or a quick elephant ride and the wedding couple would parade sitting on her back.

Elephants do not belong to Goa’s forest habitat. Goa has no wild elephant population and, almost uniquely in India, no cultural history of elephant captivity. We are therefore bound to treat them as exotic toys, to be played around with. With the intensification of tourism, posters and advertisements luring tourists to “Elephant Safari”, “Elephant Experience” and “Elephant Baths” began to be seen in all the tourist areas, including Goa tourism websites. A written complaint by a foreign tourist in 2013 about her elephant experience on spice farms stated: “It was a circus performance. The elephant had to turn around, dance, play cowboy with a lasso, play polo, soccer, basketball, sit on their back legs, draw pictures with a brush (Rs 500), demonstrate logging. To make them do all of these things, the elephants were treated very roughly.”

Thus, hundreds of tourists, foreign and Indian, would flock to these spice farms or adventure parks to partake of the various elephant experiences they offered, each of course with its price tag. A simple elephant ride for instance would cost Rs 700. An elephant bath. (bathing in the river / stream along with the elephant, while being periodically showered by the animal), would cost much more. Once could also receive blessings — standing or kneeling — from an elephant who would be compelled to raise its trunk over the head of the person. Some elephants were hired out for weddings, or stationed at temples to encourage devotees to make generous offerings to the gods.

We are taught to believe that elephants are “gentle giants”, so we mistake their apparent willingness to submit to various performances as an expression of their friendliness or a false sense of an animal-human bond. But this is far from the truth. We must never forget that elephants are creatures of the wild and therefore would have to be forced into submission through regular, brutal beatings to carry out these tiresome, grueling tasks, from dawn to dusk.

Supriya Vohra, a Goa-based environment journalist, in a searing 2018 story in Mongabay, interviewed the mahouts who traditionally look after these mammals. They confessed that the daily rush of the tourists could be so high that each elephant might have to work for a minimum of 12 hours a day.

But the events which led to Janumani’s confiscation and rescue from a life of daily abuse, bonded labour and captivity, are spread over a long five year long legal battle waged before the Bombay High Court at Goa by People for Animals, Goa’s non-profit, animal welfare, organization.

In 2018, the first PIL on captive elephants was filed in the High Court of Bombay at Goa by an animal rights activist, drawing to the attention of the court that there were a total of 12 elephants held in illegal captivity in Goa at three spice farms located in Ponda taluka and that they were being used for commercial activity without any sanction of the Animal Welfare Board of India.

Once the High Court took up the matter, the respondent spice farms were compelled to provide an undertaking that the elephants in their possession would not be used to entertain tourists thereafter. However, the ticklish issue of the ownership and possession of these mammals was not decided by the High Court, as a similar matter was pending in the Supreme Court. So the PIL was admitted and kept pending.

In January 2020, a second PIL was filed in the Goa High Court by People for Animals, as it had once again received reports of commercial use of the elephants continuing at two of the three spice farms. The spice farms denied this but the fact that requests for donations in cash or kind were appearing on social media from some of them due to the Covid lockdowns clearly showed that tourism activity was the mainstay for the upkeep of the elephants. (It takes around Rs.2 lakh a month for elephant fodder.) At the request of the PFA the High Court permitted an expert committee led by Bangalore-based elephant ecologist Dr Surendra Varma and comprising animal behaviorists to examine the health and well being of the remaining 10 elephants. A rigorous three days-and-nights inspection of the elephants revealed severe deficiencies in the health of some of them, as well as in the arrangements for their accommodation and general movement. In Dr Varma’s report of January 2021, Janumani scored lowest on welfare. He strongly recommended she be rehabilitated. Saving Janumani thus became PFA’s singular focus.

But it was not easy to identify a suitable location for rehabilitation. India only has four dedicated captive Elephant Rescue Centres (ERC) and they are already full to capacity.  Quite fortunately for Janumani, the Karnataka Forest Dept had just set up a new Elephant Care Facility and expressed willingness to accommodate Janumani in it.  On getting a green signal from the Karnataka Forest Dept, PFA rushed to the High Court once more to dispatch her there.

It was a joyous moment for everyone in the High Court when the Advocate General told the Court that the Forest Dept supported the prayer. Moved by the concern of all for the well being of the hapless elephant, the High Court bench of Justice M S Sonak and R N Laddha passed its order on 18th July permitting the transport of Janumani to the Karnataka ECF, further declaring that “we will appreciate if the Forest Department officials act with utmost despatch so that there is no delay in the matter.”

True to his word, Santosh Kumar, who is also Addl Principal Chief Conservator of Forests, exerted himself to push the paperwork through, including getting the order of release from the Court of the JMFC within the week. There was some tension when Janumani’s self-proclaimed owner approached the Supreme Court to stall the High Court’s directions. By the time the matter came up before the apex court, Janumani had already reached her new home. The Supreme Court added its own push to the entire project when it dismissed the special leave petition of the owner.

Postscript: We are told that Janumani is doing very well in her new home, and will shortly be introduced to her three new sisters who are already with the facility. Together, after a lifetime of abuse and exploitation, they can live as close to a natural life as possible. While Janumani is the first to be set free, there are a few other elephants still in captivity in Goa awaiting their release as well. Janumani’s successful ending is bound to spur efforts in the other cases as well.