With the elections to Goa Assembly fast approaching, there has been massive spurt in political activities. One development that left many bewildered was the pre-poll alliance between Goa’s oldest political party the Maharashtrawadi Gomantak Party (MGP) and the newest entrant Trinamool Congress (TMC). Speaking to SUJAY GUPTA, MGP leader Ramkrishna (Sudin) Dhavalikar charts the journey of his party since Liberation to the current situation, reasons for tying up with TMC and its future prospects. Following are the excerpts: 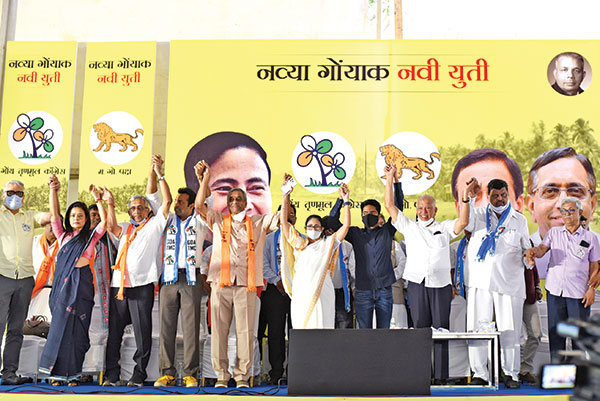 Sujay Gupta: What made you have an alliance with TMC? Because this alliance is between the oldest party and the newest party, while you had so many other options including parties who have aligned before, why did you choose TMC?

Sudin Dhavalikar: I have seen the working of different parties, and every Goan has seen the working of MGP from 1963-1979. Everybody was happy at that time. but when Congress got elected in 1980; the initial state when Pratapsingh Rane was the Chief Minister in 1987 he has worked very hard but once the PDF government formed, Goa is spoiled. And there are end number of chief ministers what we have seen till 2002. Now looking at the scenario of the political and administrator, I personally feel that the CMs who were elected after 1989 could not give directs to Goa neither they have brought progress, chief ministers except Manohar Parrikar. I was one of the persons who was always with these politicians because things were there in Goa what we have seen in last so many years that leader party gets the correct majority and because of that somehow to rule Goa, you have to come back with other party.

Herald: If the other governments have failed to deliver, then you as a part of that government should also take accountability for those things.

SD: It all depends on the Head of the government, which also controls finance. This is what is happening in Goa for so many years.

Herald: How did the alliance with TMC come about?

SD: 60% of people have not yet decided whom to vote. When this huge amount of voters cannot decide alone today for whom to vote, I could not make it with AAP. Then our TMC people, through I-Pac, approached me, I found something different coming in Goa. In between Congress approaches and says that we will have an alliance or you do not come in alliance, you be outside the alliance and we’ll support you. I accepted. But they could not go further. Every meeting nothing was coming up, despite sitting for dinners and all.

Herald: The MGP has never really managed to hold onto alliances. It has parted ways with alliance partners in the past.

SD: Every time alliance partner de-trusted; for example, the BJP de-trusted 5 times. In 2012 we had pre-poll-alliance with BJP, but they removed me as a cabinet minister one year earlier than the tenure. So every time the alliance partner ditched us. We are supportive for being the positioned government. This is the way of BJP functioning. In 2002 same thing happened.

Herald:  In 2017 you went back to support the Manohar Parrikar government, it is very surprising that the MGP decided to club up with Manohar Parrikar when the Congress already had majority.

SD: Correct! Absolutely correct. This is only because the Congress could not decide their leader in the House. When any party after getting 17, could not decide leader of the house for 24 hours, what other party will support them?

Herald: Are you saying the MGP was committed to giving support for the Congress in Goa?

SD: Of course, when Pratapsingh Rane came to me I told him, decide your leader I will support. Take 2 independents and one Churchill Alemao and we will support. Goa Forward was not needed. Then Digambar Kamat came to me. I told him the same thing - you decide your leader, then come to me. But the Congress could not decide the leader till 8 pm next day and later they decided their leader by holding a ballot (smiles).

Herald: So when did BJP approach you?

SD: Prior to that, Gadkari called me at 4 pm, on the day of the results. When Congress didn’t chose their leader or get back to me, I told Gadkariji at 7 pm to come to Goa from Delhi. Even after Gadkariji arrived and we discussed, I called up a close aide of Digambar Kamats (Lawande) at 4 in the morning and made a last minute effort o get him to tell Digambar to chose their leader.

Herald:  So you are essentially saying that Congress government without Goa Forward could have also been formed?

SD:  It was possible. With us three, two independents and one NCP (Churchill) we would’ve been 23.

Herald:  What is your party’s vision for taking the alliance with TMC forward?

SD: People say this government is the most corrupt government ever seen in Goa. Now we have to remove this image of Goa. Corruption at every level is to be removed. Now for that we have to take strict decisions, even some corrupt officers need to be sacked.

Herald: Was there no corruption in the Congress government that you were a part of?

SD: No, during the first tenure of Pratapsingh Rane when I was also a business man in 1978 there was no corruption.

Herald:  And what about 2007 government?

SD: After the PDF government, there has been corruption in every government.

Herald: The MGP all along has been perceived as a pro-Hindu party. People feel that lot of the policies and programmes are Hindu centric or could be Hindu centric, this is a perception. How will you in this today’s situation balance that perception to show that you are all pan-Goa community party?

SD: Usually MGP is viewed as a party in 1963 purely for Goans to retain the issues and to take up the issues of the proper Goans. Our government has taken strong issues like introducing the Mundkar Act. People don’t always remember that when people met Bhausaheb Bandodkar and told him if he’s merging Maharashtra he would not be the chief minister of Goa, he got that. That is why Goa retained its identity and statehood eventually.

Herald:  What will be some of the main issues that MGP will raise?

SD: GMR is selling his stake to other companies then where does Goa come in picture? Again they have already started with the coal and coal will destroy tourism in Goa, specially these areas, south Goa there is fault. And there won’t be any tourism in Goa. They want to transport 152 million tonnes through Goa by 2030 which will be harmful to Goa in all ways. It will drastically change in the conditions of people in the state of Goa.

Herald:  What is your view on the statement made by the Chief Minister 2-3 days ago at a function in Mangeshi Temple, on the 60th anniversary of Goa’s liberation, where he says that a lot of temples that were destroyed in the Portuguese era need to be rebuilt?

SD: It’s a very important question. Portuguese ruled almost 450 years. After Portuguese left and even during the Portuguese time whenever the temples were destroyed or demolished they have also rebuilt during Portuguese tenure. I think this CM does not know this. In Cortalim the Mangesh deity was there. Mangesh was shifted to my side Mangeshi in Priol constituency. Mahalsa deity was in Verna. It was shifted to Mardol. Our Mahalakshmi was in Colva which is shifted and rebuilt in 400 years back in my place where I stay, you might have visited there. Nagesh is from Curca. It was shifted to Nageshri in Bandora. So I don’t know what type of statement the Chief Minister has given.

Herald:  Hindu culture, temple culture; at the end of the day are such comments called for?

Herald:  We understand there’s good reason for you to join the alliance but obviously there’s a lot of doubt amongst a lot of people who keep raising the issue saying that in the event of this coalition not being able to form the govt, there is every possibility of the MGP ditching this coalition and going to the ruling party, BJP. How do you react to this kind of a statement?

SD: Here I can say one thing, we never ditched coalition parties, in fact in 1999 Congress ditched us. If we want to give good government and good governance, then we require a change. 60% of the people do not decide anything as of today, we will see that we will form the government in 2022. There won’t be any changes from one party to other. TMC and MGP along with other parties and some allies we will form the govt.

Herald:  In the event of that happening will you stay with TMC?

SD: We are with TMC, we will go ahead with TMC

SD: Win or lose. Look, since 1994 I started with MGP but till today I am in MGP, till today I am with MGP for 28 years. Everybody should have this principle, once you get elected in a party you will not leave the party.