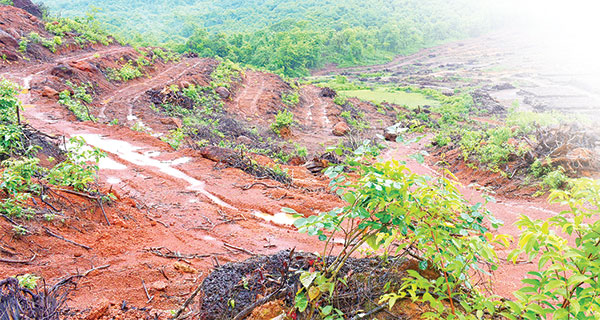 Savio J F Correia, environmental lawyer, and Expert Member Goa Coastal Zone Management Authority (GCZMA) said the theme of this year’s World Environment Day is “ecosystem restoration”. It means assisting in recovery of ecosystems that have been degraded or destroyed, as well as conserving those that are still intact. “The theme assumes special significance for Goa whose fragile ecology has been severely battered by haphazard and unplanned development. It has had enough; it is time to initiate a planned and systematic process for reversing ecosystem and habitat degradation.”

Climate change and sea-level rise are real, and at our doorstep. The debate ought to be how to deal with this risk. As a member of the State’s coastal management body, the exponential rise in shore erosion is a cause for concern. The Arabian Sea is said to be warming faster than expected and events like cyclone Tauktae are predicted to be a regular occurrence. Are we listening to nature? Or are we bent on challenging or defying it? Are we even conscious of the environmental sins that we are heaping on our children’s future?” said Correia.

Olencio Simões, Goenchea Raponnkarancho Ekvott General Secretary says, “Late Environment and Forest Minister Matanhy Saldanha who was a real defender of the environment was instrumental in enacting the Water Pollution Act and Coastal Regulation Zone in India but unfortunately the present minister does not understand the gravity of Global warming scenario and its aftermath”.

“All Central projects like Bharatmala which plans to build 65,000 km of roads, Sagarmala wherein more than 574 projects will be built for port modernisation and new port development, Blue Revolution/Neel Kranti Mission where focus is shifted from wild fisheries to aquaculture, Swadesh Darshan Scheme projects like marinas, blue flag certification will concretise and privatise beaches and rivers. This will spell a deathknell for the people of India.

“The coastal Regulation Zone which was formed in 1991 has been overlooked in totality as all regulations within 500 metres of High tide line are removed in the new CRZ Notification 2019. The Inland Waterways Authority of India Act, 1985 is amended and 111 rivers have been nationalised under the new National waterways act 2016. Major Port Trusts Act of 1963 has been diluted and the 12 major ports in India have been privatised under the new act called The Port Authority Bill 2021,” Olencio added.

Goa, is one of the smallest coastlines of 105 km and a land mass of 3,704 sq. km with many intervening tidal rivers and therefore has more than 40 estuarine, 8 marine and about 90 riverine islands and it is an ecologically sensitive area and needs to be protected, he said further.

Capt Viriato Fernandes of Goencho Avaaz political party and a civil society member said in his comment that this year the Environment Day assumes all the more significance for Goa because of the relentless destruction of our green cover, courtesy the lack of vision on the part of the authorities. “The massive destruction of the environment in Goa witnessed in the last decade in the name of development will have far reaching consequences that will leave deep scars on the ecology for years to come. But what is more intriguing and at the same time sad and shocking is the fact that despite the massive fight-back staged by Goencho Avaaz Party along with environmentalists and civil society, the government seems deaf to the earnest plea. This gives credence to the wide belief of the crony capitalists controlling the decision making in Goa for their own greed and profit. And not surprisingly, the Forest department is the biggest rogue in this entire exercise of destruction along with the Politicians and crony capitalists,” Viriato said.

He further stated that the new found theory adopted by the Goa government of compensatory afforestation in far off states to justify destruction of the forests, environment and ecology of Goa, be it in the case of Tamnar Power Transmission Project or the overall drop in forest cover in Goa, indicates the low level to which the intellectual thought process has fallen.

“As Goencho Avaaz Party, we wish to reiterate our vision for a green and clean environment for Goa and ensure that we achieve the goal of self sustenance by arresting the over exploitation of natural resources, using technology for promoting agriculture, dairy, horticulture, etc and most importantly pushing for the use of renewable energy, that will save Goa from the web of destruction and catapult into an ideal state for the rest of India to emulate,” he added.

Fr Bolmax Pereira, a research scholar, asst. professor of Botany, St. Joseph Vaz College, Cortalim and a parish priest of Chicalim said, “World Environment Day being held in Pakistan this year has a central theme “Generation Restoration or Ecosystem Restoration.” The attempt is to restore the degraded ecosystem by decreasing destructive pressures, reducing the increasing levels of pollution and conserve the still intact ecosystems of the world. The event will also mark the Launch of UN Decade on Ecosystem Restoration.”

“Look at the daylight degradation of Vaiguinim beach and Mandovi river where our govt either acts blind or is in hand in gloves. Another shocker being, the acknowledged forest destruction in Western Ghats in Goa is proposed to be restored via compensatory afforestation in distant Madhya Pradesh at the cost of my Goa. Illegal hill cutting at various places in Goa is being overlooked by the administration under the dark cover of pandemic,” Fr Bolmax added.