‘Take your money back and give us our land back’

Families who were given Rs 4 lakh compensation for expected submergence of land due to the increase of dam height, want to keep land; Returning Rs 4 lakhs is more profitable than parting with land originally given to them; Value of same land now about Rs 25 lakhs 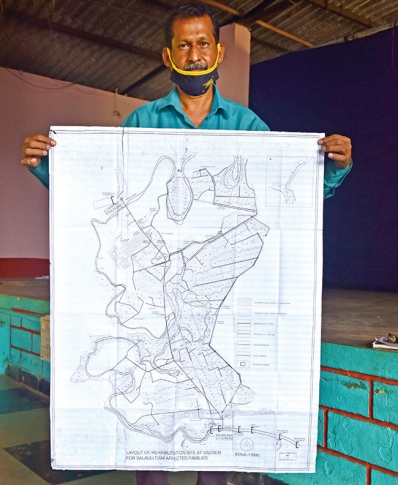 Some of the Selaulim Evacuees who had earlier opted for one time cash compensation of Rs 4 lakhs in lieu of the agricultural plots allotted to them at the time of displacement now want to return the cash compensation but not part with their land.

Subsequent to the construction of the Selaulim Dam which had FRL (Full Reservoir Level) fixed at 41.15 metres, the Water Resources Department (WRD) increased the FRL to 45 metres to meet the increasing demands for drinking and agriculture water supply.

After an increase in height of the Selaulim Dam from 41.15 to 45 officially, it was that around 170 agricultural plots which were initially allotted to the Selaulim Evacuees at the time of rehabilitation, would be re-submerged

Considering the possibility of re-submergence of the already allotted plots, WRD wrote to the concerned plot holders either to surrender their plots for lump sum cash compensation of Rs 4 lakhs or apply for fresh agricultural plots to be allotted elsewhere.

However, evacuees were already settled at the Rehabilitated Colonies at Vadem with their families. Even then, 81 families opted for one-time lump sum compensation of Rs 4 lakhs in lieu of the agricultural plots allotted to them while the remaining 89 opted for allocation of alternate agricultural plots elsewhere.

Of the 89 families, 29 were allotted plots at Naiquinim, 30 at Nagvem, 3 at Wadem and 1 at Vakini. The remaining families are yet to be provided with alternate plots as of now.

Incidentally, even those families who were provided plots elsewhere are yet to be given ‘Sanads’ for the new plots allocated to them. The Deputy Collector during the visit of the Revenue Minister on August 29, has however promised that sanads would be distributed in the next 45 days

However, the 170 evacuees who were notified of their plots would submerge under water, said that except for around 40 plots, the remaining 130 plots never got submerged underwater and the original allottees continued to enjoy cultivatory possession of the same as of now.

Most of these 170 evacuees are reportedly enjoying double benefits, while the 71 ‘missing families’ on the other hand are still waiting for the allocation of their rightful agricultural and residential plots, even after three decades of their displacement.

Some of the evacuees who had opted for lump sum compensation of Rs 4 lakhs are now claiming the Government should take its money back and re-allot the agricultural plots, which were taken over by the government, as these lands were expected to be submerged after the dam height increased

“We opted for cash compensation as we did not want to go elsewhere. However, since the plots never got submerged under water, the Government should revert back our plots to us and take the money back” said Uday Deikar, one of the villagers

Incidentally, fifteen years back when the cash compensation of Rs 4 lakhs was paid to the Evacuees, the land prices at Vadem village was nominal and it was just payment for an area of 10,000 sq metres. However the land prices in the remote villages of Sanguem taluka particularly at Netravali, Vadem and Bhati shot up to around Rs. 300/- per sq mtr, after some mining barons made huge investments in agricultural lands.

This could be yet another reason as to why some of the evacuees intend refunding the money back to the Government and keeping the land as the present going rate for 10,000 sq metres plot of land at Vadem is nothing less than Rs 25 to Rs 30 lakhs.

However, whatever said and done, the Government in its process of resurvey operations, which will run into problems, if the rehabilitated evacuees now want to return their original compensation in cash and want their allotted lands back due to the changed circumstances

Clearly, the complexities around the Selaulim Dam rehabilitation do not seem to end.