A TRACK OF EXPANDING MISERY

It’s called a ‘Special Project”, the “doubling” of the railway tracks on the Hospet-Hubli-Londa-Tinaighat-Vasco-da-Gama line. The stretch from Margao to Vasco cuts through coastal villages from Arrosim to Issorcim. On June 19, Goa formally announced its intention to acquire land for the doubling of the railway tracks; a decision, which will take in its wake heritage homes and land and further heap, what locals feel, will be untold misery. DHIRAJ HARMALKAR, SUJAY GUPTA & photo-journalist SAGUN GAWADE travel through these villages to record a sense of unease, shock and betrayal felt by Goan families living here for generations 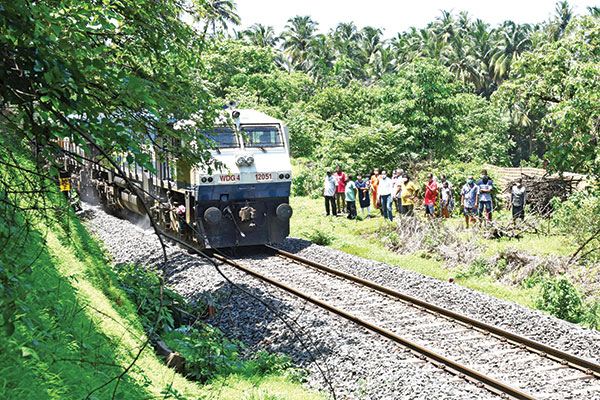 Once upon a time not too long ago, when times were normal, even beyond the normal, the family of Alexandre Jacques, lived in their cottage in Cansaulim, by the railway track. His past generation lived at a time when there was a picture postcard cottage with an orchard of trees; a railway station next door, which perhaps saw a couple of trains stopping each day, and the sea not far away. This magnificent troika of nature’s blessings carried generations of happy locals likes the Jacques family, from Cansaulim and neighbouring Arrosim, Pale  Velsao and Issorcim.

One afternoon, when most villages in these parts are in a state of deep slumber, Team Herald had the temerity knock on his door to have a chat about how life has literally gone off track. His is one of the homes which will surely fall to the double tracking of the railway line (South western Railway Construction organization) from Margao to Vasco in the second phase. The first phase extends from Kulem to Margao .

Jacques responded to the knock by saying gruffly, “I do not want to have any conversation”. Notwithstanding what the reasons were - whether he was just not in the frame mind or was absolutely fed up with literally having to live on the edge, not knowing when the government bulldozers would come taking his land and home. Jacques may not always be in the best of moods but there’s a Jacques in virtually every home along the railway tracks in the stunningly green palm lines, field embraced landscape from Majorda right up to Issorcim.

This is a story of betrayal. Of misery. Of literally pushing people’s lives out of gear after promising them that tracks in this stretch of the South Western Railway would not be expanded to take on its wake, heritage homes, which date back to the pre-Portuguese era, stretching back to the times of the Kadamba dynasty.

Along the bend from the Cansaulim junction towards Pale and Velsao, the railway track divides the land with some of the most beautiful homes anywhere in this country of ours on either side. While those on the west of the track, as Alexandre Jacques’ are more vulnerable, some on the east of the track are going too. Ashok Souza, is awaiting the arrival of his grandchild, and the start the sixth generation of Souza’s, who have lived in this sprawling residence, a period that dates back to 1805.  The track came over 50 years later and continued to be an ally, a neighbour. But if the plans of the government and tacitly the port, come to fruition, the same track will expand to evict them out of the very land on which they lived for generations. While everything is officially in public interest, it is in no one’s interest in these villages. It’s a line of misery and danger. “There are about four-odd trains, which pass everyday by the movement of coal and fertilizers that has also increased. And the sound of the heavy train engine and their horns keep us awake at night, and our homes have all developed cracks due to these vibrations”, laments Souza.

AND THE REASON IS COAL

The wave of discontent is spreading across the tracks. There is sheer disbelief that a project, which gives no benefit to Goa and will be used mainly for the transportation of coal, as was evident during the public hearings held for the expansion of coal berths in Vasco, is being pushed down the throat of people leading settled lives.  Anthony D’ Silva of the Village Action Committee against the doubling of the SWR railway track, is working relentlessly, documenting everything, getting signatures and filing petitions “ Why can’t anyone answer, who in Goa is benefitting from the project of expanding the line? Is there an Environment Impact Assessment? Yes there was a public hearing in May 2017, to discuss three projects at the MPT, two of which was to enhance the capacity to handle coal manifold to increase coal imports to MPT to 51 million tonnes a year from the current 11 million tons by 2030. And this expansion was meaningless, unless the railway line carrying coal wagons, trudging through the fields and palms of Goa’s coastal countryside were expanded, taking in its wakes homes, fields and trees.

The Goa government has been complicit in this taking over of people’s lands and homes, in supposed public interest, which locals see as nothing but as a private enterprise bulldozing all and hand-held by the State. Shortly after the Deputy Collector of Mormugao, published the substance of the notification to declare its intention to acquire land in six villages plus Dabolim and Vasco town for the expansion of the railway track, on Friday June 19, people on the village of Arrosim noticed a strange activity, two days later. At the spot, locally referred to as Gate 2 on either side of the level crossing, trees were randomly felled. Orville Dourado Rodrigues, the Chairperson of the Village action Committee told Herald that on last Sunday morning, locals woke to the noise of trees on either side of the railway track being chopped. This was done without any notice or hearing. When villagers confronted the tree fellers, asking who sent them, they simply left. “They are doing anything they want. They feel they have license to go anywhere and start cutting anything”, said Anthony D Silva.

When the guard in duty at the level crossing was asked who chopped the trees, he said “I wasn’t on duty”.

When Herald reached the spot, five days after the tree cutting, no one had come to collect the chopped wood or restart the exercise. But the finger of suspicion does point to the South Western Railway authorities, who have made no statement whatsoever.

“This is one area in Arrosim where there are storm water canals, which prevent flooding during the monsoons.  Once trees are cut and the area is filled up to lay the new tracks, the drainage will be blocked and the adjoining fields will be flooded”, Orville Dourado Rodrigues points out

There is a prospect of grief in every corner. And even some Chapels will see “development” threatening their doorstep. The ancient St Lawrence Chapel in Arrosim set amidst fields and stunning beauty will have the expanded track almost running on it.

Primeiro Waddo in Velsao, runs on the west of the Railway track just after Cansaulim. Old cottages dot that stretch of the line. Among them stands the home of Dona Olympia Rodrigues, on the other side of the unoccupied market complex of the village body. One of her descendants lived on that home, till not very long ago, its elegance evident. So rattled and disturbed was the family due to the constant sound and vibrations of their home, which was felt through the tracks; that they left their ancestral home and are now renting a house in the village, according to the other locals.

These are stories of day today living. All that has changed is the feeling of well and truly betrayed. Each white stone pillar embedded on the soil, earmarking the line, through which the expanded tracks would pass, a grim reminder of how private players and the State are pounding the future of Goan families; who were leading quiet peaceful lives, without realizing that they would come in the way of “development” of futures and fortunes of very big players and simply have to give way.