An eminent Goan leaves legacy behind

An eminent advertising person, a multi-faceted personality, passionate about civic activism Gerson da Cunha, originally from Arpora, passed away at the age of 92 on Jan 7. VIVEK MENEZES describes the man who began as a journalist and then jumped into advertising and worked in social sector 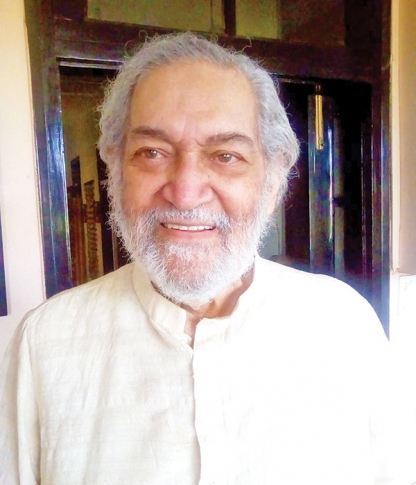 With his abrupt January 7 exit, Gerson da Cunha has brought down the final curtain on the cultural heyday of Bombay in its most exciting period of relevance. He was also one of the last living links to Goa’s most seminal contributions to that once-great world city.

More than anyone else, across his 92 remarkable years, he was the unique bridge figure between separate landscapes of meaning that intersected in his beloved home city: the boomtown of the turn of the 20th century as well as doldrums of decline after the 1980s, its artists lofty aspirations contrasted with the high octane of unfettered capitalism.

There is copious record about this great scion of Arpora’s multidimensional career: journalism at Reuters, kickstarting both Indian advertising and the Bombay theatre scene, an inspired stint at the United Nations in New York and Brazil, and decades of unstinting civic activism.

But for us in his beloved Goa, there are additional layers of significance to his passing, because Gerson was the last exemplar of the heights of our profoundly cosmopolitan heritage that spans from the Estado da India to the British Raj and far beyond. Like no one else I can think of – even amongst his closest contemporaries – he was perfectly at ease everywhere, in multiple languages, and whatever company he found himself. It is a rare characteristic of Goenkarponn, which he possessed to the highest degree.

I was lucky to spend considerable time with Gerson as a colleague in New York, Cairo and Rio de Janeiro, and he was a dear friend of my late mother. But there was something even more urgently valuable in many of our conversations, because he was intimately and authoritatively connected to his family’s roots, which criss-cross with my own lineage over more than a century. Embedded in that story – our story – is nothing less than the making of contemporary Goa and India, with Bombay as its primary engine. Now,in an instant of great loss, its greatest repository of memory is gone.

What a world it was that Gerson could recall with the greatest of ease! In an invaluable essay for Seminar in 2003, he writes, “I remember my home in Mazgaon, one of the original hills of Bombay. Each evening, you could hear the animals at feeding time in Victoria Gardens Zoo, two miles away as the lion roars. We had our own gardens, as a matter of fact, with a great peepul, a raintree and an acacia among a dozen fruit-bearing trees. It was a welcoming, hopeful city in a newly free nation.”

That home was Ulbao Mascarenhas Mansion, on what is now Ulbao Mascarenhas Road, built and named by a great-grandfather who was the personal physician to the Aga Khan. But there were uncountable additional illustrious antecedents, including the namesake grand-uncle José Gerson da Cunha, who wrote the first history of Bombay, the aunt Emmeline, who was the first Goan woman to qualify as a physician (after studying in Florence, Newcastle and London) and, further back, Sir Rogerio do Faria, the 18th century opium merchant who was the mentor of Jamsetjee Jeejeebhoy.

Those famous names represent many more who poured out of Goa to Bombay after the opening of the Suez Canal - and the roughly congruent growth of cotton mills – catapulted the city into an undisputed Urbs Prima in Indis by the end of the 19th century. This is where modern India was forged: civics, cinema, contemporary art.

Writes Gerson: “it is when the basics of life are routinely delivered, as they once were in Bombay, that a city’s mind discovers itself. Hunger must be appeased daily before cuisine makes any sense. It happened here. The city attracted and held high quality people. Such talent can choose to go where it pleases. It chose Bombay substantially in the decade or so after independence. Its economics, quality of life and openness had much to do with the decisions.”

What happened in those years was sheer magic: “the kaleidoscope has many colours and shapes. But the details may fail to depict an essential and larger phenomenon going on in the city, the fusing of the city’s disparate elements into its cosmopolitanism. High quality minds and spirits became greater because, like elements with unsatisfied valences in an environment of constant collision, they combined to form valuable new compounds.”

There were prominent Goans in this vital foment: Mario de Miranda, Charles Correia, Dom Moraes, and another da Cunha brother, the brilliant advertising pioneer, Sylvie. And, of course, there were many others from every possible background. Still, it was only Gerson with the aplomb to skip away from Bombay to achieve another set of successes in another country with a different language altogether, while maintaining his roots fully intact. Think about it. We all know Indian achievers in Anglophone countries, but Lusophone? While remaining fully connected to Goa and Bombay as though he never left?

In 2016, we were privileged to see Gerson in yet another accomplished avatar, when he made his debut at the Goa Arts + Literature Festival as a poet. His is a brief oeuvre of less than 100 poems – most of which are collected in So Far (HarperCollins) – but nonetheless dazzling in reach, scope, and impact. There are Uganda and Tanzania poems, many Brazil poems, London, New York, Argentina, Mozambique, France and Guatemala poems, and several written in and from different parts of India.

At this time of re-reading, at least, the few lines on Goa do not resonate particularly deeply. Instead, I find myself dwelling on the last lines on the last page, which were written in Berlin.