Goa is celebrating the 120th birth anniversary of yesteryear Goan artist Angelo da Fonseca this year. A book compiling his artworks titled ‘Fonseca’, written by scholar and Jesuit priest DÉLIO MENDONÇA, was released on August 6 on the sidelines of exhibition of Fonseca’s art works. On the occasion Fr Mendonca delivered a lecture highlighting the life and works of Fonseca. The book has been published by Gerard da Cunha. Fonseca was a great artist whose originality and passion in creating a new narrative in Indian Christian art. Herald presents excerpts from the lecture 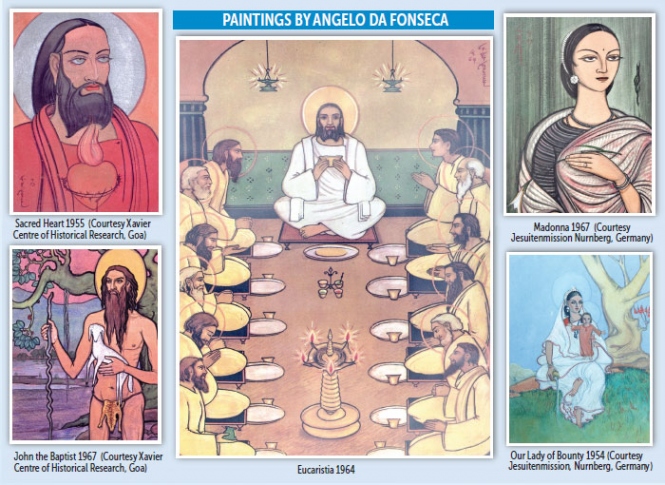 José Nicholas Angelo da Fonseca was born in Santo Estevão in 1902.  He is better known as a pioneering artist of Indian Christian paintings although he also painted beautiful secular watercolours as you see some of them in this hall. His artistic career covered a period of forty years, although he said that he began painting rather late, perhaps when he was 26 or 27 years. He died suddenly of meningitis (brain fever) in 1967. He was 65.

Fonseca began studying at Grant Medical College, Bombay, but abandoned the medicine course.  Then he joined the J J School of Arts, Bombay. However, unhappy yet again, he left it. He travelled to Bengal in 1929 and enrolled at the Shantiniketan School of Art near Calcutta to study Indian art.

Twenty years later in 1952, Fonseca wrote in retrospect:   “I wanted to be a sisya of the best Indian artist in the twenties of this century. Accordingly, I went to Shantiniketan and was the student of Shri Abanindranath Tagore. I therefore belong to the Neo-Bengal School of Painting which is a revival of the old famous Indian school of painting. Such were the youthful ideas of a budding artist, when I directed my steps to Bengal to study the art of painting.”

At Shantiniketan, Fonseca learnt to paint in Indian or Oriental style under the able guidance of two Indian masters -- Abanindranath Tagore and Nandalal Bose. He stayed at Shantiniketan for one and a half years.

Fonseca remained artistically and spiritually always indebted and grateful to Shantiniketan’s great masters from whom he inherited oriental simplicity of fine lines, colours and drawing composition.

However, Fonseca was not a replica of his Shantiniketan masters or styles.  His art practice is the result of his personality, style, worldview, perspective; as well as influences from his native Goa, Bombay School of art and classical oriental art.

On leaving Shantiniketan and returning to Goa in 1931, Fonseca continued to paint Indian Christian images in his native village. However, the 450-year old traditional Catholic community there created an unpleasant situation for Fonseca. They strongly disapproved his artistic submissions. Instead of lying low and live ‘susegad’ in his idyllic village, Fonseca left Goa to pursue his artistic career and convictions.

The Archbishop of Goa and Daman and Cardinal-elect, Rev. Filipe Neri Ferrão, while inaugurating Angelo da Fonseca’s exhibition in Margão on June 10, said, “Angelo da Fonseca created an astounding Indian Christian iconography that seamlessly blended both Eastern and Western influences as well as traditional and innovative trends. In doing so he invited the ire of many of his own fellow-Christians, who thought he was creating anti-Catholic paintings, by depicting, for example, the Virgin Mary as a Hindu woman wearing a sari and a bindi. This was understandable to some extent, as the norms in church art and sculpture ninety years ago were largely dictated by the European school.”

Here a slight deviation. Recently, an interviewer asked me whether Fonseca was a painter ‘ahead of his time’ and therefore misunderstood.

My take on it is Fonseca  was perhaps  ahead of his time'. This is how we like to think about a person with advanced and ingenious ideas that are only accepted much later and their authors honoured. But even a genius as well as his/her original ideas are social, political, or natural products of their times. It is rare for people to see far ahead of their times. There are, yes, many people living behind their time, who do not follow the signs of the times because of their closed, ultra-conservative and prejudiced mind-sets but who do not hesitate to auto-proclaim as defenders of orthodoxy. Criticism against Fonseca, a pioneer of Indian Christian art, came from such quarters. Deviation ended.

Fonseca was aware of the unique artistic Christian manifestations in Old Goa, although by then the region had been allowed to run down. Nevertheless, the artistic talent seen in Old Goa and elsewhere must have exerted a permanent influence on Fonseca’s mind. “An artist does not stand above society and creates out of nothing. He is receiver and beneficiary of signs being sent to him.”

Discouraged by his fellow-Christian Goans, Fonseca left Goa and settled in Pune.

In 1933, the British Anglicans from an ashram in Pune welcomed Fonseca to stay in their ashram. When Fonseca was in his early 40s, he was already enjoying some national and international recognition. A handful of foreign Jesuit priests patronized him and helped him to display his original paintings, not in the churches. The best known patron was the famed Fr. Henry Heras, S J, who since the mid-30s encouraged him like a real father. He stayed in that Ashram for 17 years painting silently like a monk.

Despite his Indian Christian offerings not being appreciated in his native place, Fonseca continued to visit and be a part of Goa. He was a true son of the Goan soil and Goa was his first laboratory, to which his works constantly returned for inspiration. The story of Fonseca is inseparable from the history of Goa as well as from the other great Goan masters.

Therefore, the book Fonseca is also a history of Goa, Goan art, Goan identity, as well as of Goa and Goans turning a Nelson’s eye to their best art creations and artists.  But the book is essentially the story of the first man who had the enduring courage to translate the Christian beliefs and narrative of Christ’s life in ways that could connect Christians to their Indian traditions and political duties.

Fonseca was a pioneer who interpreted the biblical narrative through the indigenous pictorial vocabulary, for which contribution he became known in his lifetime but more particularly in the 1930s and 1940s. He was considered as the foremost painter of Christian art of India.

His patrons, all Anglican and Catholic clergymen, would not even think of placing Fonseca among the modernists, since the Catholic Church was hostile to modernism, or the modernists were hostile to religion too. This hostility went on till the Council of Vatican II in 1962.

In what sense was or is Fonseca a modernist?  Chapter 3 in the book explains it.

You know that the modernists and secularists did everything to exclude religion as a regressive social force. But since Fonseca’s admirers and patrons wrote about him as a ‘painter of religious themes’, critical art historians excluded Fonseca’s works from art history books and discourses of modernism. Fonseca became inconsequential to opinion makers in the art world. This exclusion would eventually erase Fonseca from history and art history, wrote Paulo Varela Gomes in an insightful essay on Fonseca.

Fonseca was regarded or disregarded as one among many in India and throughout the world who served religion through art. No doubt, the omission of Fonseca from the History of Art, and history understood as an academic discipline, is the result of focusing exclusively on content matter (religion) of his works, rather than also on the formal elements or his skill – and above all on the inclusive social message of his artworks.

The exclusion of Christian subjects and of artists branded ‘religious’ by modernism and secularism, continues to make it difficult for historians and critics to deal with the twentieth-century Christian art.

However, it is undeniable that several paintings with Christian themes by artists like Vincent van Gogh, Paul Gauguin, Salvador Dalì, Marc Chagall, Francis Newton Souza were in no time erased from the History of Art by modernism or post-modernism.   And of course the classic painters who served religion through art and architecture have not vanished from contemporary art narratives. Fonseca used art to tell the story of Christianity to India.

Anyway, if Fonseca is still a forgotten master, it is certainly not the fault of modernism and secularism or whatever. Then whose fault?  Please, have a conversation with Fonseca, I mean the book, for an answer.

Fonseca followed the Indian classical forms of painting. His figures are elegant, well proportioned, not over expressive. He held on to the canon of classical painting to represent the Christian values that might become recognisable to Hindus as well. By following classical art he was also a traditionalist. But he was convinced that art was a universal social language through which all could understand the Christian values.

Fonseca’s creations point to a confluence of cultures, traditions and art histories. His art is a window to and a synthesis of what had happened before in western and Indian art. The Goan theologian José Pereira wrote:  “Angelo da Fonseca stands in the middle of this east-west divide, and bridges it.”

Very few representatives and critics of art celebrated Fonseca in his own lifetime for his original qualities and good works. I have been fortunate to look very closely several times at Fonsecas together with a friend writer and an art authority and my first art mentor, Vivek Menezes, who has written much on Fonseca. Menezes has also written the Foreword to the book.

Particularly in the post-Vatican II period (1962), the Catholic Church in India took up Fonseca and interpreted his Indian Christian art, consciously or unconsciously, to its own advantage, when it needed to establish its ‘Indic’ credentials in independent India.

That said, the most dominant narrative of Fonseca’s artworks that did the rounds since 1962 and repeated ad nauseam was that of ‘inculturation’ mainly by the Catholic clergy. Simply put, ‘inculturation’ relates essentially to the Church vocabulary and practice. It refers to the fact that the Catholics need to adopt and adapt to Indian (not Hindu) languages, symbols, signs, dressing, art, forms of worship, liturgy, etc. to make Christianity more meaningful in their lives.

Fonseca reflected profoundly on his religious beliefs before proposing visually a new Indian way of seeing the world, society, traditions and practices to his fellow Christians.  Painting for Fonseca was an act of meditation or contemplation oriented to social practice.

The master created more than 1,000 paintings, mostly in watercolour, and several sketches, during 40 long years. Although the market was never Fonseca’s priority, it was not easy either to sell his paintings or live by them. When Fonseca died in 1967, there were “more than 500 religious paintings,” left unsold.

Ruthless criticism toughened him. He was a man of apparently little success, but he continued to silently paint all his life, despite financial difficulties.  I conclude with the words of the Archbishop Ferrão during the same exhibition in Margão, “Such people (like Fonseca) have the courage to face opposition from their contemporaries and to row against the tide, knowing that they carry within them a seed that promises to grow into an exotic tree of rare beauty which only future generations, and not their own, will know to appreciate.”