Back to the roots for sustainable growth

The way of life for the Dongrim residents has been forced to undergo a change, as the khazan lands, on which the traditional farmers would cultivate paddy, cashew and other crops, have been submerged under water for some time now. Back then, there was so much of food produced that it was not only enough for them and their business, but was also quite sufficient for a useful barter system with the famers of the neighbouring villages. While they are still pinning their hopes on the government to fix the broken bandhs and restore the original status of the fields; the villagers have not simply given up, but have looked for different avenues such as fishing to earn their livelihood. Others have take up more enterprising initiatives like eco-tourism that have help them reap benefits and allowed them to continue their self-sustaining style of living. PIO ESTEVES shares their story 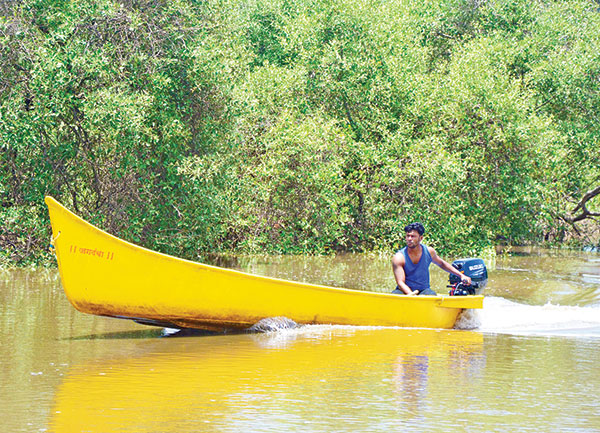 Dongrim, a hamlet of the village of Mandur, is situated 15 kilometres from Panjim. ‘Dongrim’ means village situated on a hillock.

The specialty of this village includes the ‘khazan’ lands, cashew plantation and fishing. Over the years, a maximum number of farmers were actively involved in either of the occupations throughout the year.

Around 25-30 years ago, the khazan lands were cultivated by the farmers of this village and there was never a dearth of employment for those residing in this village. But today, the khazan land has been submerged with river water, leaving no scope for cultivation.

Khazan land lying fallow for years together has resulted in the growth of mangroves all around the place, thus posing another threat for cultivation. And if no timely initiative is taken to access the submerged khazan lands and do the needful in controlling the flooding; then the vast lands proudly owned by the people of the locality, will no longer be in possession of the villagers.

“Due to cultivation of khazan lands, there was maximum number of farmers from Dongrim. And the growth of paddy, cashew plantation and fishing was enough to sustain the community of the village,” said Mahendra Shirodkar, a resident of Dongrim.

“Excess food was exchanged through barter system to the neighbouring villagers. The bandhs, which have been badly destroyed, need to be rectified on priority basis in order to enable the re-cultivation of the khazan lands,” Shirodkar added.

Throwing more light on the khazan lands, another resident of Dongrim, Kashinath Naik pointed out that the khazan tradition includes the paddy and fish.

Each month of the year had its own activity. Labour contract prevailed here and most of the folk did not have to move out of the village for job opportunities. Barter system was in full swing and rice was exchanged for chillies, ‘bhaji’ and other eatables,” he elaborated further.

“Due to submerging khazan lands and non-cultivation, the barter system perished and over a period of time, mangroves have also been destroyed,” Naik explained.

“Vegetables such as lady fingers, cucumbers, ‘tendli’, ‘gonsalim’ and fruits such as bananas, guavas, ‘boram’ were quite popular in Dongrim. Now, the bandhs need to be rebuilt as once that is done, the vegetables and fruits will grow again,” he predicted. He concurred with the consensus amongst the locals that the government’s intervention is required at the earliest.

In another development, various experts conducted a thorough study of the submerged khazan lands in Dongrim-Tiswadi taluka, following which; they said

they foresee huge scope for khazan agro-eco tourism. A big draw for the locals is that they can earn their income in the village itself.

“Youth of the area are enthusiastic and want to bring their fallow land under agro-eco tourism,” informed principal of Kala Academy’s Goa College of Theatre Arts, Ramrao Wagh.

“Generating additional revenue through eco-tourism activities, without causing any harm to the environment is the best option. Some of the tourists have already visited the place for bird-watching and crocodile-sighting, except for some facilities such as boat rides on a bigger scale and eateries, which needs to fall in place,” he opined.

A team comprising educationists, environmentalists and government officials also visited the place where they took stock of the situation concerning the neglected khazan lands. They are of the firm opinion that a master plan needs to be worked upon to prevent the area from being, in simple terms, wasted. This, they believe will also go a long way in initiating various facilities to the visitors.

“Due to submerged khazan lands, apart from farming, the local youth could work on eco-tourism activities as a sustainable growth,” said architect, Mahesh Naik.

“They could be made aware of the schemes available and provide help for the resurrection of the khazan lands, which is the need of the hour,” he added.

“There is vast scope for eco-tourism in this area,” said environmentalist, Mahesh Patel, while adding, “backwater boat rides, fishing will definitely attract tourists to this place and it could serve as a source of income to the youth.”

“The village womenfolk could get themselves involved in self-help groups and through the sale of homemade products, they could generate income, which would help sustain their families,” he disclosed.

Much can be achieved with timely guidance and assistance from various government bodies and experts. And all initiatives put together will only help the local leaders, like-minded villagers and the youth make their dreams come true.