Beyond mining: There’s wealth in our farms, for all of us

Without destruction or extraction and without sending our resources abroad for the benefit of the few as mining does, there is richness in our farms and orchards. And Goans are reclaiming their land as a route to prosperity. Sujay Gupta meets our heroes of the soil and reports on how they have taken their future in their hands 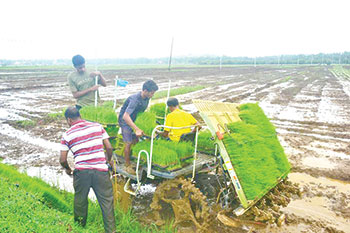 There is a revolution brewing. It’s not yet a patch on the green revolution that enveloped the country, led by Punjab. A revolution so-called due to the infusion of technology, seeds, machinery and so on and so forth in agriculture, a movement led by the eminent Dr MS Swaminatahan.

What that revolution did was to make economic sense of agriculture, giving hope and reliance. In Goa, as we grapple with a sense of economic loss and uncertainty, with industries like mining, which has all but collapsed, barring the machinations of mining barons and the government to do some backdoor and in some cases illegal reviving; people are getting back to the farms. And while it is too far down the line to give credit to the government for this revival, it is time to document efforts to some Goa’s agricultural heroes, institutions and communities, sons and daughters of the soil, who have gone back to the farms, some even leaving their jobs and professions and dedicating their professional lives to farming.

In this role of revolution, the role of traditional village communities, educational institutions like Don Bosco cannot be understated.

Unfortunately, the government of the day hasn’t quite walked the talk on two counts. Firstly it hasn’t educated traditional farming communities on best practices and worked with them. Nor has it made tangible efforts, to increase the area under cultivation. In fact, one senior state BJP functionary said that he was “shocked” that during the recent One-day assembly session - the demand for grants of over thirty departments were passed, but the Chief Minister did not say a world on Agriculture, or specifically about the need to support and increase productivity and turn over from cashew cultivation, Goa’s most potentially profitable agro-industry.

Most importantly, the benefits of agrarian activity whether on the farm, field or orchard needs to be passed onto traditional communities. And while a quasi-government body like the State Biodiversity Board is doing it due to the personal vision of its Member Secretary Dr Pradip Sarmokadam, this has never been put on the front burner of government policy.

“Traditional communities have sovereign rights over their resources. Each village now has a people’s Biodiversity Register, where ideally the traditional knowledge in possession of the village elders is used for decision making with respect to village resources,” said Dr Sarmokadam.

He went on to give instances of how this has worked. In Parra, the traditional watermelon had almost become extinct. During field visits, the biodiversity committee found that two women in the village had preserved some of the old seeds. That was enough to start a scientific project to use and multiply those seeds, an effort, which has borne fruit. Parra now has got its traditional watermelon with big seeds back.

Then, J Santan Rodrigues, the Chairperson of the Curtorim Biodiversity Committee is a hero for his efforts of reviving the traditional variety of Patni rice of his village. More than the revival of the variety, the project revived the pride of Curtorkars. This is something that son of the soil Vince Costa did when making a documentary on the agrarian heritage of the village Saxtticho Koddo (The Granary of Salcete).

The wealth from the land by giving back to the land gives a sense of purpose and identity to people as Costa realised through his documentary. As did Vinod Barve of Valpoi whose efforts have led to seven varieties of jackfruit being grown. Similarly, Gaondongri has upped the ante in honey cultivation while Cotigao has taken the plunge to increase the production of chirke or edible roots.

There is wealth in our land, our farms and orchards. And this can actually give more to the state than mining, or even tourism does. 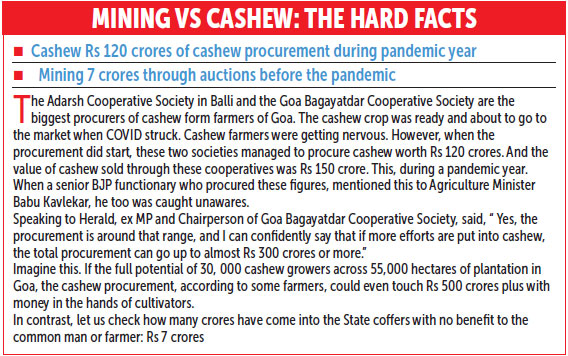