Bridging heritage for a cause

The three-km Panjim-Ribandar causeway, also known as Ponte de Linhares, was built in 1633 and has always been looked upon as a road, but historians and environmentalists look at its heritage value. The causeway, built for pedestrians, bullock and horses during the Portuguese regime, gave way on November 3, leading to traffic chaos in the capital city and the surrounding areas. VITHALDAS HEGDE talks to some of the historians, architects and environmental lovers and suggests that the promenade, considered to be one of the best in the world, needs to be preserved not only for its heritage value but for the touristic beauty it creates for all those using the causeway 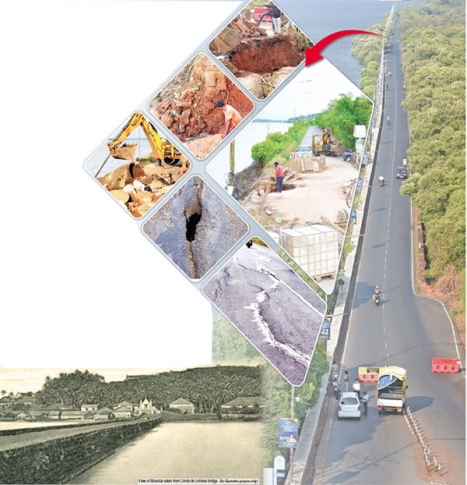 The centuries-old Panjim-Ribandar causeway or Ponte de Linhares is now in the news with citizens and environmentalists stressing the need to repair and restore this distressed three-kilometre-long heritage route.

The causeway joining Panjim and Ribandar was built in the year 1633 at the orders of the then 4th Conde de Linhares and the 23rd Viceroy D Miguel de Noronha and is acknowledged as a singular feat of engineering.

The entire route is flanked by river Mandovi on one side and salt pans embedded in Khazan lands, a remarkable indigenous hydrologic system predating the Portuguese, designed to control tidal flow, on the other. It has 40 pillars and as many as 48 arches, some large in size.

Renowned architect late Charles Correa has once said that Panjim-Ribandar causeway is one of the best promenade that he had seen in the world. It was earlier built for horse-drawn carriages but many centuries later it has miraculously endured the heavy burden of modern vehicular traffic.

The causeway was earlier a part of the National Highway 4A and it has withstood movement of heavy vehicular traffic for centuries even after it developed cracks and caved in on few occasions.

This structure is a unique construction of Portuguese era and has heritage value which needs to be preserved now and create a new promenade along the beautiful coast of the Mandovi River.

This structure along with the comprehensive city development plan will be the touristic landmark and serve as a platform to hold tourist festivals and also recreate the harmonious blend of Indo-Portuguese architecture, as its functional value cannot be fully maintained due to tremendous spurt in traffic, for which, bypass is already in operation.

After Panjim was selected under Smart City Mission by the Union Ministry for Urban Development, Government of India in 2016, the Parrikar-led government had plans to develop the causeway as a tourist attraction by introducing a joggers’ track, a cycle track, electric bikes and solar-powered cars and close it for vehicular traffic permanently.

Many meetings were held but nothing concrete materialised and the proposal was dropped after it was found that it would be not feasible to construct a parallel causeway through the salt pans and due to Coastal Regulation Zone (CRZ) norms.

Since it is a structure of heritage value, the heritage lovers and environmentalists feel that restoration work should conform to world standards for heritage structures like the International Council On Monuments and Sites (ICOMOS) charter specially for marine structures and step by step guidelines for restoration must be framed. CPWD manual for heritage buildings may be taken as supportive document to incorporate local or regional experience as also documents of archaeological department i.e. National Policy for Conservation of Ancient Monuments, Archaeological Sites and Remains (NPC-AMASR) and Indian National Trust for Art and Cultural Heritage (INTACH) guidelines and experiences and available literature.

The causeway first developed stress between 1995 and 1999 but its foundations were re-strengthened by using boulders. Again in 2014, a culvert towards Ribandar end caved in and it was then the State government decided to fast-track the construction of Merces-Ribandar-Ponda bypass road a few months before the decennial Exposition of the relics of St Francis Xavier (SFX) at Old Goa.

After fully commissioning of the four-lane bypass road the old stretches of NH4A i.e. Panjim to Old Goa including the causeway was discarded by a Notification in 2018-2019 and this stretch was handed over to the PWD Division II as State road to be maintained by them.

Recalls heritage lover Fr Visitacao Monteiro, “I had raised alarm signals way back in 2016 when the Panjim-Ribandar causeway was in distress and that the PWD should act fast before any tragedy strikes. Unfortunately nobody took measures to repair it and I remember that in 2015 a woman from Divar died following an accident on the causeway. It was due to the neglect of those who should have maintained it.”

Fr Monteiro also feels that there could be load over the ageing structure due to repeated hot-mixing with 12-15 inches of thickness layer over the causeway.

According to Fr Monteiro, prior to 1965 there were no plants, trees and mangroves grown both the sides of the causeway. The plants, trees and mangroves grew only after 1965 when people stopped cultivating the paddy fields in the khazan lands adjoining the causeway. The PWD also failed to undertake timely maintenance of the causeway thereby leading to a huge inconvenience to the motorists. He has now demanded that the government should repair and preserve the heritage structure for posterity.

Many environmentalists are of the strong opinion that the mangroves were damaging the structure and making it weak.

When contacted, PWD Division II executive engineer Sadhana Bandekar said that they have already started the repair work of the damaged portion of the causeway. The work is on in full swing and the causeway will be opened for vehicular traffic by Tuesday, November 8.

Bandekar further said that soon after the portion of the causeway had caved in, the PWD immediately tendered the work and also sanctioned it. “The tender was awarded to contractor Alla Baksh at an estimated cost of Rs 14.36 lakh. The repair work was suppose to start and completed before October 30 but was delayed due to unseasonal rains. The repair work of the causeway is now in full swing and it will be completed latest by Tuesday even as work was getting slightly affected during high tide,” she said.

Former National Institute of Oceanography (NIO) scientist Dr Antonio Mascarenhas said that the causeway has now been engulfed by mangroves, which have grown around and into the laterite structure of the bridge, which is also reinforced with wooden beams.

According to Dr Mascarenhas, men in canoes used to enter through three under-passes i.e. Ourem creek, Ribandar creek and a third creek located midway. He feels that this heritage structure was never maintained ever since it was built.

A close analysis of the Survey of India (SoI) toposheets of 1964 reveals that a kilometre wide strip abutting the entire causeway consisted of salt pans, interspersed within low paddy fields. Coconut trees were the dominant tree species. Mangroves were totally absent along the river, not identified even within the narrow creeks. Similarly, the National Hydrographic Office (NHO) charts of 1970 and 1986 confirm that the Patto-Panjim to Ribandar causeway traversed extensive salt pans and was entirely free of mangroves. Several historical documents also testify this observation.

Over the decades however, the passages under the 40 archways have been blocked due to siltation, he said.

Dr Mascarenhas said that as a member of the Goa Coastal Zone Management Authority (GCZMA), he had raised the issue of haphazard mangrove growth during its 125th meeting held on February 11, 2016. After discussions and due deliberations, the GCZMA decided to refer the matter to the Forests Department for a detailed study.

Dr Mascarenhas said that the Forest Department had planted mangroves in the Mandovi river along the causeway. Although the intentions of these plantations cannot be doubted, the approach adopted was totally wrong. These trees have been planted too close to the stone walls and have now penetrated inside the stones.

Dr Mascarenhas strongly suggested that the mangrove trees which are too close to the edges of the causeway be removed. Also the plants grown within the ‘setback’ need to be removed forthwith.

Dr Mascarenhas has strongly called for protection and conservation of the causeway at all costs and that this bridge of yore should endure its unique identity and be preserved for posterity.