The Government of Goa constituted a Special Investigative Team (SIT) headed by the Superintendent of Crime Branch Nidhin Valsan to dig deep into the irregularities involving land and property deals. The SIT was formed on June 15, 2022, and as days progressed, the SIT was flooded with complaints. Looking at the gravity of the situation, the State government on August 30, 2022, had constituted a Commission of Inquiry under retired High Court Judge V K Jadhav to conduct a detailed inquiry into the alleged land grabbing cases and fix responsibilities against government servants and other public functionaries involved in the scam. PRATIK PARAB reviews the progress of the investigations since the formation of the SIT 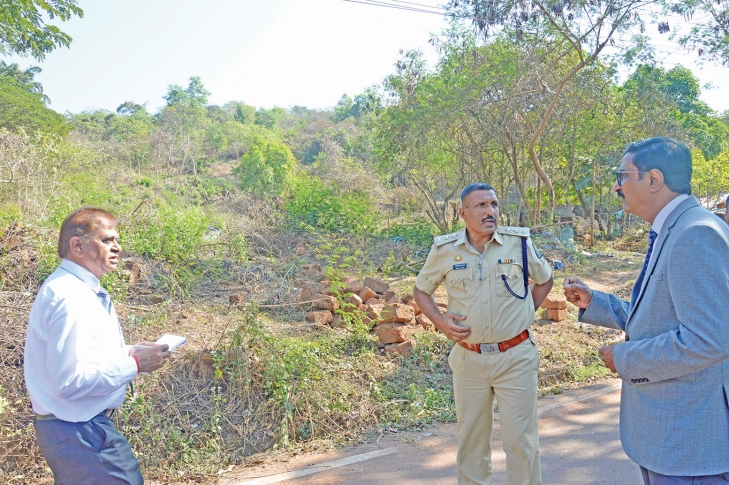 Herald’s investigations and reportage into the alleged land grab cases in Goa really opened the Pandora’s Box of land grab scam, which all knew of, but no one was prepared to talk about.

In most of these cases, it is found that sale deeds are found signed either after the person is dead or making the person ‘alive’ after the death. Ironically, in some cases, sale deeds are found signed by persons who are not even born. These cases are not only haunting the owners who have now found out that their names are already deleted from the one and fourteen forms but also the people who are genuine sellers or buyers are

As per sources, these files of fake documents were mostly moved during the pandemic time. However, the documents were mutated during the last three or four months. While a common person has to run around for at least a year to get his or her documents mutated after following all the procedures, it is learnt that in such cases the mutation process was completed within a period of one or two months, sometimes even less giving a clear indication that concerned government departments officials or staff are hand in glove including the revenue, archives and police.

The series of exposes by Herald on the land grab controversy became an emotive issue across Goa. Such deep ran the tentacles of the perpetrators that even former United Kingdom Home Secretary Suella Braverman's family was not spared.

Having roots in Goa, her father filed a complaint that two of his ancestral properties in North Goa have been grabbed by an unidentified person. Following this, a Special Investigation Team (SIT) of the Goa Police department registered a complaint and a probe was initiated.

Most of the complaints of lands that were fraudulently transferred or sold were from Bardez taluka. The small Assagao village which was all this while a peaceful locale, has turned into a hotbed of land grabbing. Most of the cases that have been reported are from the village of Assagao.

Soon, the SIT got success with the arrest of accused Vikrant Shetty from Margao on June 19, 2022, nearly 15 days after the first complaint. This was the first action of the SIT in the land grabbing cases.

Shetty was arrested after he was found involved in two cases of land grabbing. He was arrested for land grabbing by means of forgery and creating a fake paper trail including the sale deeds. However, the SIT had opened the Pandora’s Box and in the days to come, the team would go on to arrest many more accused.

By August last year as many as 15 people were arrested in the land grab case including the main accused, his associate, government servants and others. Till that time 95 properties were allegedly grabbed and under investigation. The situation changed drastically as the SIT received several complaints in addition to the cases of land grabbing transferred.

According to the reply by Chief Minister Pramod Sawant in the Legislative Assembly, there are 58 cases of land grabbing from 2018 onward that are being investigated. Three cases registered in the year 2020 are pending trial while two cases are ‘A’ final and one case is ‘C’ final.

One of the cases has been transferred to the Economic Offences Cell (EOC). Also 52 cases are presently under investigation. Presently, 700 properties are involved in 451 complaints received by the SIT and other police stations across Goa. 81 properties have found their mentions in the FIRs filed by police and investigations have revealed that another 95 properties have been grabbed by the perpetrators.

The reply also reveals that in 2018 there were two cases registered, which increased to four in 2019 and jumped to 13 in 2020. In 2021 there were seven cases reported even as the Covid-19 pandemic was wreaking havoc in the world.

The demand for properties in the tourism State surged as the government opened its doors for people from around the world claiming that ours was the safest state from the dreadful virus. With the demand for properties, the lust for easy money through real estate and the consequential lies, forgery and cheating that followed in 2022, the Police registered 32 complaints of land grabbing. Most of the grabbed land is in Assagao, Anjuna and Calangute areas.

“The chargesheets in other offences of land grabbing will be filed subsequently as there is a lot of documentation and investigation that needs to be done to get to the root of the cases,” Nidhin Valsan, SP, Crime Branch, SIT said.

“The Commission will be recommending changes to the systems pertaining to the lands in Goa. The loophole found in the Archives Department which was used to grab land is one of the other deficiencies and lacunas that the commission will look into,” he added.

Official sources informed that hearing in the land grabbing cases will commence from Monday, January 23. The team initially inspected three plots at Badem, Assagao, followed by properties in Calangute and Anjuna.

During the inspection, the Commission of Inquiry took report of types of properties, its details and also the area surrounding the targeted plots. Some plots were found with structures (vacant old Goan houses).

The inspection revealed that at Arradi in Calangute, there were four plots which are part of the land grab scam. However, of the four, two properties were unidentified since there were no complaints of land grabbing. In such cases, the officials said that complaints will be registered by the investigating officer on behalf of the State.

The inspection at most sites revealed the involvement of mastermind Mohammad Suhail, who has been arrested so far in six cases. His driver Steven is involved in one such alleged property scam.

Suraj Samant, Police Inspector and Investigation Officer said, “We have noticed that succession deeds have been registered in South Goa while the victim resides and the property is in a taluka of North Goa. The Registrar seems to have ignored the basic required documents and accepted unofficial documents to register deeds. We are investigating all the cases from these and other angles.”

Justice Jadhav emphasised that only cases of land grabbing will be entertained and the ones which do not construe any such offence will be dismissed.

The State government on August 30, 2022, constituted a Commission of Inquiry under retired High Court Judge V K Jadhav to conduct a detailed inquiry into the alleged land grabbing cases and fix responsibilities against government servants and other public functionaries involved in the scam.

The Commission of Inquiry has to submit report to the State government with recommendations within four months from the date of its first seating.

“Though I have seen similar cases while serving as judge in Civil and High Courts in Maharashtra, the number of such cases in Maharashtra was much lesser compared to Goa,” Justice Jadhav said.

“Though I am yet to start inquiry, I can say that restriction and safeguards to avoid lands getting grabbed are necessary,” he added.