CHANGES IN THE POLITICAL FIELD, BOON OR BANE?

Coronavirus and its different variants like SARS-CoV2, Delta and the latest Omicron, have drawn lot of attention in the past two years. While various Goa government departments have taken the pandemic excuse for delaying projects, sending reports to National Departments like the NCZMA, NGT, etc, the politicians never appeared to have taken a break, keeping themselves busy in their field with games of their own, especially in the last quarter of 2021. VITHALDAS HEGDE takes a look at the events of the year that has ended and trails the main issues from January to December, focussing more on the political scenario in the State which is heading for the Assembly election likely to be held in February/March this year. 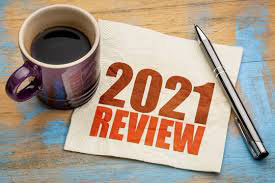 he tragic accident involving Union Minister Shripad Naik in the first fortnight of January, curtailment of Assembly sessions, entry of Trinamool Congress (TMC), resignation of seven sitting MLAs and political party leaders changing sides and COVID-19 deaths took centre-stage in the State in the year 2021 that we have just bid adieu to.

Union Minister Shripad Naik met with an accident in January while returning to Goa from Karnataka. He survived the accident but his wife Vijaya and a close aide died in the mishap.

Amid the COVID-19 scare the budget session and monsoon session of the Goa Legislative Assembly were curtailed though the Opposition cried foul over it. The budget session was cut short as the State Election Commission (SEC) announced the schedule for the second phase of the municipal elections that had been postponed after the High Court of Goa at Bombay had ordered that the reservations be redrawn.

In the Municipal elections held in March-April, Bharatiya Janata Party (BJP)-supported panels won an absolute majority in three of the five municipal councils.

But there was other political happenings in April, when Goa Assembly Speaker Rajesh Patnekar dismissed two disqualification petitions filed by the Congress and the Maharashtrawadi Gomantak Party (MGP) against its rebel MLAs. The Goa Pradesh Congress Committee (GPCC) president Girish Chodankar had filed disqualification petition against its 10 MLAs for defecting to the Bharatiya Janata Party (BJP), MGP MLA Sudin Dhavalikar had challenged the switch-over of its two MLAs to the BJP in 2019. The Speaker delivered the verdict after both the petitioners approached the Supreme Court.

Besides being at the receiving end over three linear projects, the Sawant government faced major public protests over the passing of The Goa Bhumiputra Adkikarini Bill 2021. The Bill was passed by the Goa Assembly while the entire opposition had staged a walkout demanding that the Bill be referred to the Select Committee considering its far reaching consequences.

Following widespread protests which were not just political, Chief Minister Pramod Sawant said that the government would reintroduce the Bill by omitting the word “Bhumiputra” and after receiving suggestions from the people. But later the government allowed the Bill to lapse stating that it required wider consultations.

When the entire State and the country were under lockdown amidst the COVID-19 pandemic, there were other issues that cropped up related to the environment. The three projects – the SWR railway double-tracking, and a power project and widening of the national highway – were gathering pace.

Taking advantage of the situation, an entire forest area near Sangodd, a few kilometres from Goa border of Mollem was cleared. The felling of trees was just the tip of the iceberg.

The tiny State of Goa was all set to lose a huge chunk of forest cover. Of the 1424.46 square km of forest land in Goa, approximately 200 square km is privately owned. As per the initial estimates at least 50,000 trees are likely to be axed as the State government chooses to go ahead with three proposed infrastructure projects.

It was left to the environmentalists in the State, who fought to save the forests of Mollem, a veritable whiff of fresh air, and to the many who were concerned that thousands of forest trees would be felled for three linear projects a reassurance that the forest may still stand for the generations that come to enjoy.

A complaint was filed by NGO Goa Foundation against approvals granted to the infrastructure projects by the Standing Committee of the National Board of Wildlife (NBW). During the hearings the CEC had come down heavily on the State and Central authorities pointing out that it had received a large number of complaints against these projects, which are being strongly opposed by the locals.

After the inspection the CEC issued recommendations against the three linear projects that cut through the Mollem National Park and Wildlife Sanctuary, to the Apex Court.

The CEC called for cancellation of the South Western Railway (SWR) doubling project; shifting of the Tanmar power lines, wherein the present alignment will be cancelled and it will be taken to the existing 110-KV line; and that the national highway expansion project, which doesn’t have an Environment Clearance (EC), will now require an EC.

The ‘Save Mollem Campaign’- Goan youth-driven movement against the three linear projects, passing through the protected wilds of Mollem, was recognised for the ‘Sanctuary Wildlife Service Awards 2021’ by India’s leading wildlife and conservation magazine Sanctuary Asia.

The Save Mollem Campaign, launched in June 2020, is a citizen’s movement to raise its voices against the three alleged destructive projects – double tracking of railway line, power project and national highway expansion – passing through the Mollem National Park and the Bhagwan Mahavir Wildlife Sanctuary.

Another major issue which hit the headlines was fitment of digital fare meters for tourist taxis by the Department of Transport. There was a stiff opposition from taxi operators who demanded that Goa government should first scrap the existence of GoaMiles app-based cab service in the State.

The taxi operators also filed a writ petition in the High Court of Bombay at Goa, against the State government for allegedly favouring digital meters that are far more expensive to cheaper and alternative meters available in the market.

Finally following the High Court directives, the department commenced the installation after several postponements owing to protest from taxi operators warning of cancellation of permits if not fitted.

With the High Court closely monitoring the installation process that commenced from July 1, the government in the month of May had notified a scheme to cover the cost of the digital meters borne by the taxi and rickshaw owners.

The scheme titled ‘Goa State Public Transport Reimbursement of Cost of Digital Fare Meter 2021’ was to ensure the concerned stakeholders are not financially burdened, the State government moved a step ahead to provide free digital fare meter along with data service to the taxi operators.

During an ongoing hearing in a contempt plea filed by the Travel and Tourism Association of Goa (TTAG), the Court sought to know why the contractors were delaying in the installation process. During the hour-long hearing, it also said that the Department of Transport should take action against the suppliers if they are responsible for the delay, else the court will have to act against the department.

The department scheduled the final fitment deadline as per the series of the vehicle registration numbers from July 2021 and warned that their permits would be cancelled on the very next day of the deadline. The government had so terminated the permits of nearly 3000 taxis.

With motor vehicle officers dealing strictly against taxi operators, bookings for its installation witnessed a sharp rise. The department recorded 80-odd installations per day in November, figures that increased to around 150 per day in December.

The Goa Cabinet had cleared a proposal to allocate 10 lakh square metres of land for an Indian Institute of Technology (IIT) Goa Campus at Shel-Melauli in Sattari taluka. However, after the villagers held protests against the project and various NGOs supporting their agitation, the government was forced to shift the project to another location.

But the issue has not yet ended as Shel-Melauli villagers are again up in arms against the government demanding withdrawal of criminal cases filed against villagers during the agitation and to revert back the land to the original owners.

The Health Minister has now requested the Chief Minister to drop criminal cases filed against the Shel-Melaulim villagers and to revert the land to the Revenue Department.

In the last quarter of the year and ahead of 2022 Assembly elections, Trinamool Congress (TMC) made an entry in the State politics following a survey by poll strategist Prashant Kishore's Indian Political Action Committee (I-PAC) on behalf of the party. This was followed by former Chief Minister Luizinho Faleiro resigning from the party as Congress MLA and joining Goa TMC along with others. West Bengal Chief Minister Mamata Banerjee’s party started strengthening its base by admitting prominent political leaders, who included former tennis player Leander Paes, former MLA Kiran Kandolkar, actress Nasifa Ali, among others.

Curtorim Congress MLA Aleixo Reginaldo Lourenco whose name was also declared as the party’s candidates for the ensuing assembly polls too quit Congress and embraced TMC.

In October, former Goa Governor Satya Pal Malik made an explosive statement claiming that there was corruption in the Goa government giving fodder to the opposition, who were seeking an opportunity to attack the Bharatiya Janata Party (BJP) government.

Delhi Chief Minister Arvind Kejriwal's Aam Aadmi Party (AAP) continued to strengthen its base by inducting more leaders. During his frequent visits to Goa, Kejriwal gave six guarantees to people, which he said, would be fulfilled if AAP is voted to power.

National Congress Party (NCP)'s lone MLA Churchill Alemao merged the party's legislative wing with the Trinamool Congress. However, NCP Goa unit challenged the move before the Goa Assembly Speaker contesting that the TMC has not representation in the Goa Legislative Assembly.

In the month of December, Congress accused Urban Development Minister Milind Naik of sexually exploiting a woman and lodged a complaint against him at the Women’s Police Station, Panjim. This forced Naik to resign as Minister paving way for a fair inquiry into the allegations.

Some events worth mentioning in the political field are how politicians can change their parties like chameleons. Even a former Zilla Panchayat (ZP) Member did a ‘Ghar Wapsi’ and returned to Congress within a few days. “Politicians make strange bedfellows,” said a loyalist from Congress.

Deaths of COVID patients due to lack of oxygen

As the positive cases of Coronavirus started increasing during the second wave, the Goa government imposed curfew in the State in April and continued to extend it with strict restrictions till the number of positive cases dropped substantially.
As the COVID-19 infected cases started increasing and deaths due to shortage of liquid medical oxygen (LMO), Health Minister Vishwajit Rane stoked a controversy by claiming that deaths of many COVID-19 patients were reported due to lack of oxygen levels in COVID wards of the Goa Medical College and Hospital (GMCH), Bambolim during the late hours. However, the Minister made a U-turn by stating in the Goa Assembly that no deaths were directly attributed to the shortage of oxygen, while the opposition charged that 80 people died during the ‘dark hours’ in the hospital.
The Health Minister was embroiled in another controversy over the issue of purchase of Ivermectin tablets worth Rs 22 crore for prophylaxis treatment for COVID-19 patients. However, Chief Minister Pramod Sawant clarified that the government had not purchased Ivermectin tablets.
The government launched Tika Utsav, a vaccination drive across the State on three different occasions to inoculate people in the age group of 18 to 44 years against Coronavirus.
The three-day monsoon session of the Goa Assembly in July concluded without a debate on COVID-19, inviting criticism from the opposition parties.
The COVID-19 pandemic created havoc in the State claiming 3518 lives since its outbreak.
Related news