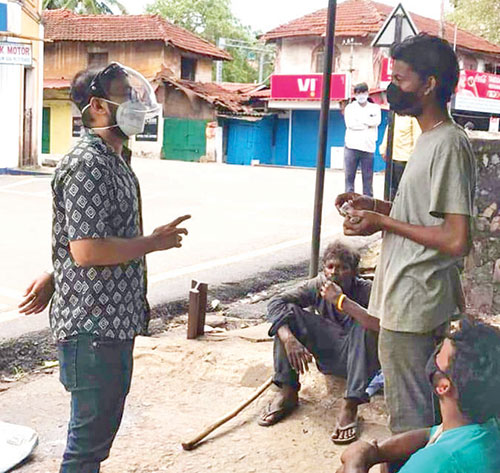 During the recent second wave, a group of volunteers who were carrying out COVID related relief work encountered a different kind of obstacle when they would meet the public and in particular, the under-privileged who they were offering various forms of assistance.

It was the belief that one should not take the vaccine as it could harm them instead of protecting them.

This concerned the volunteers group as they were witnessing this during the peak of the second wave, when the daily number of deaths being reported was at their highest and they believed that deliberately avoiding the vaccine could put these people at a higher health risk.

“During our daily food/mask distribution drive in Margao with volunteers Kai Da Costa and Gian George, we noted that most of the underprivileged had not even heard about a vaccine and many others were swayed by WhatsApp misinformation,” said Dr Kashyap Bandodkar, a dentist with Goa Dental College.

Along with like-minded volunteers, they had come together under the banner of 'COVID service Goa’ (CSG) to engage in on ground COVID-relief work.

“The most common misbelief encountered was that the vaccine would make a person sterile. Although hilarious, there were people who believed notions of a microchip being implanted in the vaccine for surveillance by authorities or even reprogramming a person to behave in a particular manner,” said Dr Kashyap.

The volunteers also lamented that it was disheartening to also note that few local religious leaders were allegedly dissuading their followers from getting vaccinated, allegedly terming it anti-religious and claiming that it contained fetal remains of unborn children.

“It was apparent that a campaign was needed on a war footing to reduce vaccine hesitancy. We began engaging with as many people as possible during our food distribution drives, busting unfounded myths and started convincing them to take the vaccine,” said Dr Kashyap.

They then covered about 250 people a day, in and around Margao garden, Khareband, Railway Station Road, old railway station and outside ESI and district hospital.

Next, they targeted potential COVID hot-spots including the slums. They  covered Moti Dongor slums on top of Monte, Margao and slums near the railway station. Besides Dr Bandodkar, Dr Sushmita Karpe, Herambh Karpe, Devansh Cholera and Gaurav Kandolkar, volunteers at CSG and others, interacted with multiple groups of people and local community leaders.

“Initial resistance was palpable due to preconceived misinformation but repeated interactions finally convinced them to change their mindset. It was humbling to note that dozens had taken the vaccine eventually after the vaccine drive had opened up for the general public,” said Bandodkar.

Another major roadblock faced was the issue of the floating migrant population that was unregistered and without identification of any sort to get vaccinated. With the help of Peter Borges, chairman of Goa State Child Rights Commission, they highlighted the issue to the concerned authorities and brought to light Central Government SOPs to implement the same - with the mechanism in place, they could reach a larger target population.

“What surprises me is the hesitancy amongst the educated ‘anti-vaxxers’ who vehemently oppose vaccination. The government should engage with all such persons at the earliest since these misinformed persons are actively disseminating pseudoscience under the name of awareness in Goa,” said Dr Kashyap.

“Vaccination is the most potent weapon in our arsenal against COVID right now, admittedly it is not a blanket protection against the disease but the data is irrefutable when it comes to protection against severe illness and transmission,” he added.

On a more positive note, the people who have taken vaccination on volunteers advice have not only changed their own minds but have helped convince others to take the vaccine shots.