In a matter of grave concern, over 200 small ‘entrepreneurs’ from March to September have requested the State government to cancel their trade licence. In a sign of things to come and how badly COVID has brought businesses to a standstill, all eyes are now on the government, to see how it reacts, if it reacts, given that this is not an isolated development and is a growing trend that would not have happened if the prevailing circumstances were different. The sheer consequences of such decisions could have a domino effect on the economy of the State. Agreed that the COVID pandemic has hit everyone but is it the right time to strangle the industry, which provides not only jobs but also revenue to the State; when the bigger players like the sectors of mining and tourism are shut? It is a serious issue and the Goa government must look into it with sensitivity. No doubt health is important and all precautions have to be taken. Against that backdrop, VIKANT SAHAY looks at why it’s also important for the powers that be, to look into the issue of job providers. Ultimately, if more and more people have limited access to disposable income, then the spending capacity of consumers will also decrease 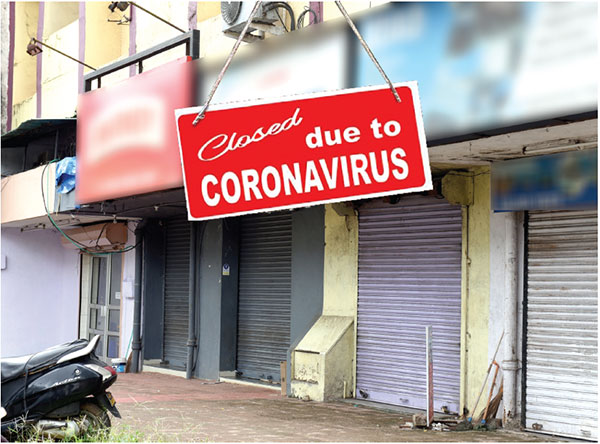 These are certainly uncertain times and it appears that COVID-19 is not going to leave anytime soon and the new-found problems with businesses are here to stay for sometime at least. This is the scenario world over and coronavirus has ravaged the Indian economy as well with the ever-increasing COVID tally affecting most of the main sectors. The shrinking GDP is an indication of how badly the country is struggling and there’s already a trickle-down effect on States, who are yet to receive their full GST compensation from the Centre.

The State of Goa is also undergoing a severe pandemic and health related issues but at the same time, the industry and small businesses are crying out for help as earnings from business outlets are nearly negligible.

In fact, small traders are surrendering their trade licences and there is a beeline to do so. Over 200 small businesses people have expressed their willingness before their State government too. Is it not a message? Yes it is, but why?  Because there are no earnings for them to pay their high rentals for the premises form where they operate from; or the taxes are too high for them to sustain their business when everyone is fighting for their survival.

In the Corporation of City of Panaji (CCP) alone there are nearly one hundred applications, which have been made for withdrawal of their trade license.

Similarly, in Mapusa Municipal Council it is around 43, Ponda is it around 10 and in Margao it is around 50 and the numbers could rise.

Interestingly Pernem Municipal Council has not received any application for the cancellation of trade license as yet.

Commissioner of the Corporation of the City of Panaji (CCP) Sanjit Rodrigues told Herald that, “There has been considerable numbers of requests to cancel the trade licenses but we would not be able to give the correct figure as of now. Many small timers including restaurants have shown their keenness to close down. Also many offices have started work from home, which is the new norm in these times, while some businesses have downsized and they are cutting down on their cost on rentals. Yes, some curtailment has happened and the reasons for surrendering their licenses could be many but certainly it is sign of worry as considerable amount of businesses are shutting shops. We are still compiling the data but it could be close to 100 who have applied for cancellation of their trade licence.”

The Chief Officer of Mapusa Municipal Council Kabir Shirgaonkar told Herald that, “We have received 43 applications since March this year for the cancellations of their trade licences, which is surely higher in numbers and it looks that it is all because of the COVID-19 pandemic.”

Chairperson of Ponda Municipal Council Vishwanath Dalvi confirmed to Herald that they received 10 applications since March this year for cancellations of trade license. “Out of these 10, four have stated in their application that it’s due to the COVID pandemic where subsequent to that, there has been no business as well as high rentals in these times. These are some of the issues, which have led them to apply for cancellation of their trade licence,” said Dalvi.

The Chief Officer of Pernem Municipal Council Mandar Mohan Naik told Herald that, “For the present year 2019-20 and till date we have not received a single application for the cancellation of trade licence. But we have got some application for new trade licence. We hardly have 10-15 shops in the market area and those are not having very regular heavy business where they can suffer huge loss. If there is a loss it could be of one or two days in the month. During the lockdown, they were not majorly affected as they did not have to pay much wages to their staff.”

On the other hand, the situation in the so-called commercial capital of Goa is one of despair, as least 50 businessmen in Margao have applied for cancellation of trade licence for their businesses.

The reasons are varied, some of which are absence of labourers and workforce and lowered business that have forced them to close down for now. But the bottom line is that the economical meltdown has been unforgiving and combined with the earlier lockdowns, their businesses have suffered dearly. There are even some establishments that haven’t dared to reopen. Restaurant owner Vivek Patel said that though he has opened his establishment it is running at only 25 per cent table occupancy.

“The hope of a better season ahead is bleak due to which several businesses from Margao and Fatorda have applied for cancellation of trade licence,” he said.

Hotelier Niraj Naik said, “Hotels, restaurant owners are closing down businesses even as the government recently allowed opening of businesses. Many have shut because of lack of labourers but several are quitting as there are no customers for the services provided.”

Proprietor of Jemma Homemade, Jermaine Mendes, who now makes pickles after shelving their experiment with a restaurant Amigos, which had a staff of about 6 people told Herald that, “We applied for the cancellation of our trade licence for restaurant in March and we are converting the space into a manufacturing unit for pickles and jams. We had to be very creative for our survival and had to move fast.”

The situation with small businesses is more precarious and many believe that it is a time for survival of for them and their family members. “Every business setup is doing whatever it takes to stay afloat. Some are even shutting down or giving up rented areas to cut cost. While attempts are being made to keep employees, maybe with wage cuts, in some cases, they are relieving them. Companies are trying to realign their portfolios like alcohol-based are adding sanitiser to their product line and many other innovating solutions for their survivals,” said Blaise Costabir, Chairman of Confederation of Indian Industry (CII), Goa chapter.

He believes that the Union government arranged for emergency loans to be made available, however it is a double-edged sword, in case you cannot service this emergency debt a company will be in more trouble. ‘Goa government has tried to make it easy to travel intra-state and interstate. They have rolled over permissions, there also gave an electricity sop for two months. However, they do not have the funds to directly help. It is going to be a long hard journey from here. The virus is going to spoil the party more often than not’, he added.

Costabir further stated that, “I would believe if we survive 2020-21, we would be blessed. But till a vaccine appears we are going to see pretty uncertain times. Having said that, there are a lot of positives zoom meetings take a lot of travel and cars of the road and productivity is higher. There is more like this, and yes we will not see the old days again, and we must accept the new normal.”

On condition of anonymity one retailer who used to run his retail business in Carenzalem cancelled his trade licence in April this year and shifted his stream to insurance business. “The rentals were high and there were hardly any sales, which was creating losses in the business. It is difficult to do business when the rentals are high and there are no customers in your shop,” he added.