Call to rise and wake up

The new Konkani song called Utthat Zagat Marta Ulo featuring Fr Bolmax and others releasing today urges Goans across the globe to stand up and fight for the future of the State. AJIT JOHN spoke to persons who mooted the idea behind the song. He spoke to various singers, composers and directors involved in the song which is calling Goans all over the world to wake up and fight for their beloved motherland

Its lyrics call out to the children of Goa. It urges them to stand up and be counted so that they do not shed tears tomorrow when their Goa is gone. Utthat Zagat Marta Ulo a song featuring Fr Bolmax Pereira and Pranita Gaude and which is composed, directed and written by Joe Dcosta will be released on digital platforms today. It is a song addressed to all Goans informing them of the perils facing their State and how the state they love will cease to exist if they did not stand up and fight for its future.

Fr Bolmax Pereira said it was a song from a mother calling out to her children. He said, “The motherland of all Goans living across the world is calling them. This song is a follow up to all the agitations in Goa against its destruction, against political mishandling and the general environmental mismanagement. We have to all come together as one and fight for our Goa. This is a new call for unity. All the NGOs, agitators, environmentalists and generally everyone should come together for this fight. This is the idea. Save the motherland from the crony capitalists and from the present day government that does not seem to be working for the benefit of the people.”

The idea for this song was first mooted on January 16, Goa’s Opinon Poll day, by Father Bolmax, parish priest of Chicalim church. Various people were having discussions and an idea started developing. Joe D’Costa, a composer who was based in Mumbai and worked in Bollywood, offered to contribute his talent and time. Father said they spoke to various activists who were fighting various battles around the State. He said they took it upon themselves to make this call. Fr Bolmax said he provided the support and ideas to Joe who then did everything else. This, he said, was his contribution to Goa. He had offered to get stars and great singers from the industry but it was decided it would be better if we could get activists who were involved on the ground to be part of the song. Most of them featured as presenters of the song.

Pranita Gaude, who sings in a traditional style, was roped in to be part of the song. She said she had never ever sung in a studio and it was an interesting experience to be part of it all. She said “We rehearsed and went and sang in the studio. Father Bolmax sang very well I should say”. Asked how she felt about the lyrics, she said it was wonderful to be part of such an initiative that was focused on rousing the people of the State. She said “Everyone knows what is happening around the State and it is very thoughtful for them to do this. It is coming out at the right time.”

Joe Crasto, who is usually based in Mumbai but is now in Goa due to the pandemic, said, it was his duty as a Goan to do his bit for a very important cause. He said he met with various thanks to Father Bolmax and gathered information. He said “I knew of him because of his activities but meeting him was a great experience. I was aware of the various agitations that were being conducted in various parts of the state and how he had played a role”. He admitted it took him a while to write the lyrics because he had to assimilate all the information he was receiving. Joe said. “Composing the music took even longer because it was not some regular pop song. I had to also incorporate the various musical cultures of the state like the Hindu, Muslim and Christian culture. It took some time”.

The song attracted a very large crowd. Creston Antao, Chairman and Convener of Goencho Ekvott, said the song was apt at a time when some people were focused on destroying what made Goa so unique. He said “Look at what is happening now, this virus is causing such damage. This is due to the fact we are tampering with nature. When you destroy forests viruses are let loose. The song involves a lot of feedback from people. It also talks about what people want in the future.”

There were people who volunteered their time for this effort. Sabira Shaikh, a student of Father Bolmax, said she was not aware of the various agitations and sought the help of father who provided her with all the info. This prompted her to attend press conferences and agitations. She said “Youth were detained, we presented our demands to the government and nothing happened. We tried our best. With regards to the song, he was shooting near a mosque in Vasco, Fr Bolmax called me requesting help in getting members of the community involved as characters in the song. He said he wanted to show the world that each and every community was involved in fighting for the future of Goa. I helped him and it was a great feeling to be involved in whatever little way I could.”

Royla Fernandes, an architect and activist who was part of the Mollem campaign said this song was an excellent idea because it would create awareness through music. She said such initiatives had to always be welcomed because it would help expand the circle of people who were concerned about the future of Goa. She ended by saying she was looking forward to the launch on May 30 and the response the song would receive.

John Coutinho assisted in bringing all the activists together and helped organise a meeting on January 16, this year and said it was great to see a song develop out of those discussions. He said “We are all activists who are fighting on the ground. This song should reach out to all Goans all over the world and help us fight our battles. It is a long road ahead and we need songs like this to help us.”

Perhaps on Sunday morning the tranquil silence of Goa will be silenced by the sound of Goans singing Utthat Zagat Marta Ulo enthusiastically or humming it softly, perhaps signaling the start of a groundswell of positive emotion towards ensuring Goa develops in a direction without hurting anyone. 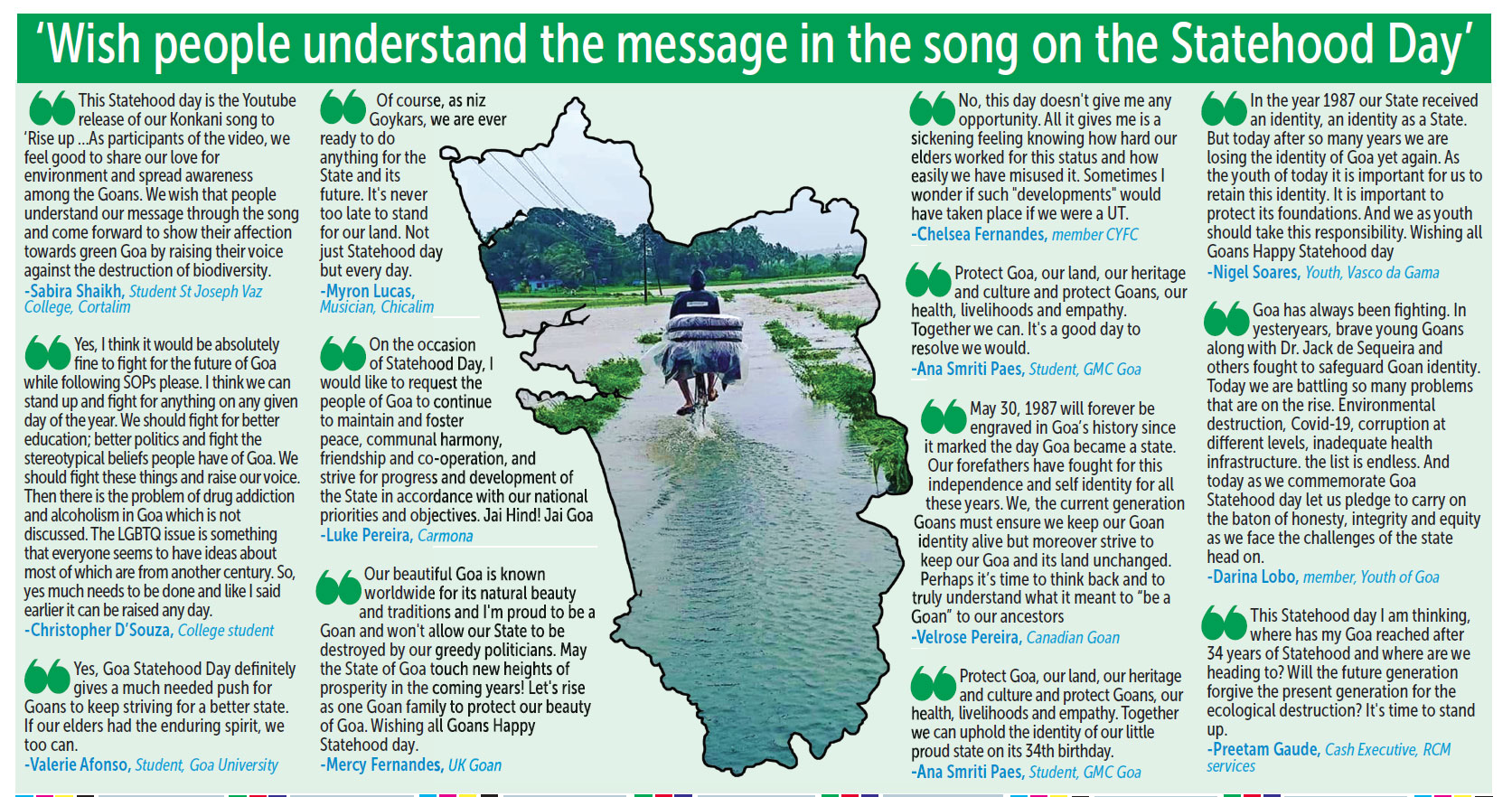