Peak holiday season has gone bust, and there’s uncertainty over the immediate future in the coastal taluka that is heavily dependent on the revenue generated in this industry. Tourism stakeholders; from shack owners to taxi drivers are struggling to make the best of the situation. ABEL BARRETTO reports 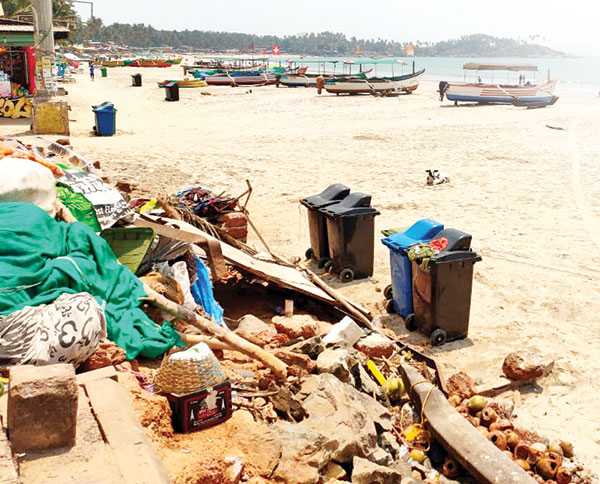 The world locked down on account of the COVID-19 pandemic since the beginning of this year has been anything but a holiday for those who would have otherwise been enjoying their holidays; which in turn would have been driving the economy of the countries that are so dependent on the tourism sector.

Canacona, a coastal taluka at the extreme South of Goa, was an agrarian economy till some two decades ago but for a long time, it has been a strong bastion for tourism. However, today, with almost everyone involved in some or the other sorts of tourism related business, they’re all amongst the worst hit due to the lockdown.

With all the beaches in the taluka wearing a deserted look since March 22, 2020, the shack and taxi owners of Canacona amongst others are staring at a mountain of unpaid balances on their books of accounts and the uncertain skies over the horizon are not good indicators for a better coming season they say.

Sucour Da' Silva, a tourism stakeholder, while summing the grim situation said that the COVID-19 pandemic outbreak has dealt a bodily blow that he says is a never-before phenomenon.

"Tourism in Canacona taluka arrived in the late nineties. With no other economic activity other than agriculture all of us living in the coastal villages, embraced the opportunity never realising that the tourism bubble will burst so suddenly," said Sucour

"Business gurus advise us not to put all the eggs in one basket but even some of those who tried investing in some other businesses also have suffered doubly" he lamented.

Most of the other shack owners expressed similar views and rued the fact that even before the foreign tourist season could get over; the devastating coronavirus had left their business in ruins.

"The effect was such that there is not a single person on the coastal belt of Canacona who will say that the pandemic has not affected him or her financially" said a visibly upset shack owner.

Pankaj Naikgaonkar, Vice President of Goa Private Shack Owners Association, while reflecting on the current situation said that the most affected and totally paralysed are the private shacks and huts operators in Goa.

"We started the season with a powerful cyclone, which delayed the start of the business from October to first week of December. Later the collapse of Thomas Cook and last this COVID-19 has thrown the tourism business out of gear" lamented Naikgaonkar.

"It’s disastrous for everyone in the tourism industry. And in addition to this,  we paid the salaries of our outstation staff and took care of them with food etc as well as the stranded tourists, who had to be accommodated free of charge" said Naikgaonkar.

"The government has to come to the rescue of the hospitality sector, otherwise it will be tough for the tourism industry to survive" he added.

The lakhs of tourists both foreign and domestic patronising the alluring beaches of Canacona gave birth to an ancillary industry in the form of taxi service. Local youth who couldn't muster finance to run shack or restaurant business rushed to the banks and in no time those directly dependent on this trade rose to more than a thousand in the taluka.

The mounting interest and no income since the last four months are driving the taxi owners to depression.

"The moratorium announced by the Union government on the loans and advances taken from financial institutions is far from reality" said Nilesh Naik a taxi owner from Rajbagh. "After the lockdown was relaxed, I was surprised to see my car loan account added with fine and additional interest, when I confronted the bank manager he said that I should have opted for the three month moratorium by sending a message on the phone. Since every Indian is affected financially, I fail to understand why it is not extended to all loanees" he argued.

"I appeal to our Chief Minister to come up with a State-specific package for those affected financially, apart from waivers in utility charges, other fees, GST and other cess" said Naik.