Could this be his season? Patient Princeton awaits his opportunity 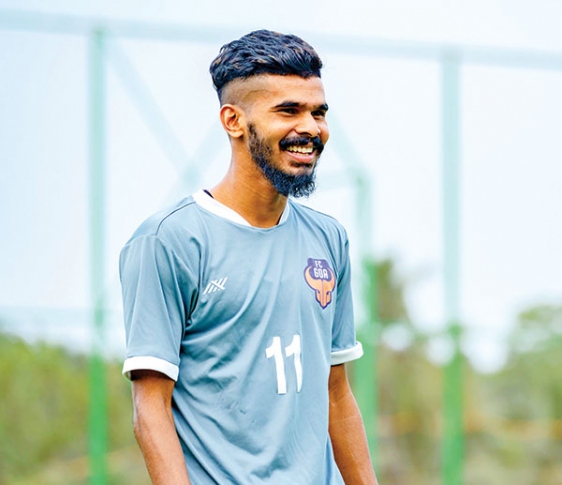 FC Goa got one of the finest midfielders in the League. With Brandon Fernandes, Lenny Rodrigues, Edu Bedia it was always going to be difficult for any youngster to make in the star-studded side. Many would have given a second thought in joining the side in ‘these position’ in particular.

Then there is Princeton Rebello, the youngster who has taken the challenge of earning his place in the squad. The Betalbatim lad, who represented India at the junior national team, has been patiently striving during the training sessions, waiting for his senior start for the club.

Having been known as one of the notable talents in India, the lad didn’t get much time under former FC Goa coach Sergio Lobera, playing just 38 minutes in 8 appearances for his side.

“It was very difficult for me but I never stopped believing in myself and kept working hard. With the almighty Lord’s blessing,” expressed Princeton who vowed to continue with his hardwork.

Princeton also represented India in the 2017 U-18 SAFF Championship – where he scored against Maldives and Bangladesh.

“For me, this is an important season. I want to play as many matches as possible and I want to improve myself and be there on the top,” expressed the midfielder.

FC Goa has tough fixtures at the start where they face Bengaluru FC and Mumbai City FC in their opening two matches.

Coach Ferrando was full of praise for the youngster and said, “Princeton works hard and I am happy with him both on and off the pitch. He is a young and intelligent player and he wants to help everybody. The most important is to help him step by step and find one position in the first eleven for him. I hope it will be a great season for Princeton.”

Captain Edu Bedia was one among the foreign players who always believed the youngster deserved a chance in the team. “Princeton and some others have to step forward, have confidence in themselves and have personality.  They have qualities to stand out. The young players are the ones who have surprised me the most, they have a very good level, and they have to keep working to keep improving.”

With the change in guard, Ferrando has kept his probable XI tight-lipped leaving everyone guessing of who could make it; and with this change, this could be a chance reckoning for the youngster to seize the moment and make this season the one he has longed for.