Damodar Mauzo, a prolific writer whose oeuvre spans the literary gamut from short stories to novellas, novels, children’s stories, to film scripts, biographies and newspaper columns, bagged the 2021-22 Jnanpith Award. Xavier Cota, a close friend of Mauzo, explains the struggle as a writer and his fight to retain Goa’s identity during the historic Opinion Poll 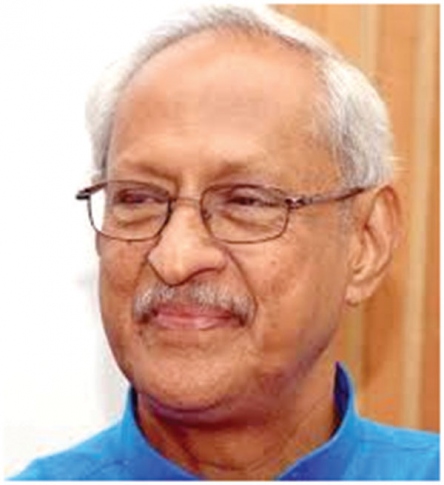 The eminent writer Damodar Mauzo has bagged the 2021-22 Jnanpith Award. The award annually bestowed on one Indian writer, writing in any of the 22 languages included in the 8th Schedule of the Constitution and English, is given to an author, for ‘outstanding contribution to Indian literature’.

The highest Indian literary award presented by Bharatiya Jnanpith, a non-government body, was mooted in 1961 with the active involvement of India’s first President Rajendra Prasad. The first award was presented in 1965 to Malayalam writer G. Sankara Kurup. The nominations for the award received from various literary experts, teachers, critics, universities, and numerous literary and language associations are shortlisted by each of the 23 Language Advisory Committees, which send their recommendations to the Jnanpith Award Selection Board which then evaluates the recommendations and announces the winner for that year. Mauzo is the 57th winner. Earlier, ten winners have shared 5 prizes - thus 62 winners in all.

This is the second award for our mother tongue which makes us immensely proud, as Konkani after a protracted struggle is a recent (1992) entrant into the 8th Schedule. Ravindra Kelekar was the first Konkani writer to win in 2006. To date, Hindi has won the highest number of 11 awards while Konkani with 2 awards is on par with Punjabi & Tamil, ahead of one-each Sanskrit, Kashmiri and English and way ahead of 7 recognised languages which are yet to open their innings! A singular achievement for a language mockingly denigrated as bolibhasha or dialect, by the Marathi lobby which did its utmost to prevent the recognition of Konkani. To its credit though, Marathi writers and the press are today in the forefront to congratulate Mauzo, with interviews and evaluation of his works splashed across their newspapers from all over the state - ironically more so than our Goan bodies - ‘Only in his hometown is a prophet without honour’!

Damodar Mauzo is a prolific writer whose oeuvre spans the literary gamut from short stories to novellas, novels, children’s stories, to film scripts, biographies and newspaper columns. He began writing short stories when he was in college and even broadcast his Konkani stories over Akashvani Mumbai. Graduating with a Commerce Degree through Podar College, Mauzo returned to Goa to look after the family general store in South Goa’s predominantly Catholic, coastal village of Majorda. Struggling to learn the nitty-gritty of running a shop that was more a department store, selling everything from provisions to tailoring material, school books, to cement and roofing tiles and a liquor bar. This entailed Bhai even bottling marble sodas and concocting conservas of liquor much in demand in those times! Remarkably, after a real hard day’s work, he would still find time to write at dead of night! Remarkable indeed, considering that he was a newly married man who had brought a Bombay-bred, bride from a conservative family into what was for her, an alien scenario. But Shaila proved that she was more than equal to the task, adapting herself (rather than changing) and giving him all the support he needed including critiquing his work.

The first time I heard him was when he read out his story Ganpati Pavlo over AIR Panjim. Even though I was more attuned to the Catholic Saxtti dialect, and Mauzo was reading in standard literary Konkani I enjoyed it, grasping it perfectly! His labours found their way into his first collection of short stories – Ganthan, released by Goa’s Poet Laureate Manohar Rai Sardessai. His next offering of short stories was aptly named, Zagrannam (Late Nights). There was no stopping him. His cornucopia kept on spewing out short story collections like Rumad Ful, Bhurgim Mhugelim Tim, Sapan Mogi, novels like Sood & Karmelin which bagged him the prestigious 1983 Sahitya Akademi Award and Novellas like Tsunami Simon which garnered the Vishwa Konkani Puraskar. His foray into Children’s literature produced three books. Bhai Mauzo has also produced biographical sketches on Shenoi Goembab, the Father of the Konkani Renaissance. He has written scripts and dialogues for films like Shitoo, Aleesha, O Maria and Enemy? for which he has bagged prizes as also an Indo-Brazilian script still in the works. Mauzo has authored  Phoenix-achem Ut’thanani Sahityache Utfarke an overview of Konkani language and literature meant for research and post-graduate scholars, and a recently published surreal novel Jiv Dium kai Chea Marum (Should I Kill Myself or Have a Cup of Tea) is making waves among Indian literature cognoscenti especially in translation.

Two of his stories Angvonn and Khilli were televised in Hindi on Doordarshan’s Ek Kahani & Ek Aur Kahani series, as Manauti and Naka Bandhi respectively. Karmelin which catapulted Mauzo to national fame was translated into English and thirteen Indian languages. His works are regularly translated across India and the world. Mauzo is the co-founder and co-curator of the prestigious Goa Arts & Literature Festival an outstanding Literary Fest drawing top writers from India, neighbouring and foreign countries to Goa since 2010.

Another aspect of Mauzo’s personality is his activism right from the time of the fight to retain Goa’s identity during the historic Opinion Poll. He even suffered multiple police lathi blows when he was in the Steering Committee of Goa’s popular successful movement Konkani Porjecho Awaz which demanded Official Language Status for Konkani, Statehood for Goa and inclusion of Konkani in the 8th Schedule, all achieved by 1992. In 2015, following the assassinations of intellectuals like Dabholkar, Kalburgi and Pansare, Mauzo chaired the Dakshinayan Abhiyan - a movement against caste discrimination and attacks against intellectuals and rationalism (Rajmohan Gandhi was a co-panelist). He spoke out against the stifling of freedom of expression in India and ‘moral policing by proponents of mono-culturism’. He wrote a strong letter to Sahitya Akademi (where he had served a five-year term on the Executive Board) asking them to speak out against the rising intolerance. The Karnataka SIT probing the 2017 murder of journalist-activist Gauri Lankesh found that there was a threat to Mauzo’s life by right-wing extremist outfits, for which, he has been given 24/7 police protection.

At a personal level, I feel privileged to be his close friend and to have translated three collections of his stories These Are My Children (Katha), Teresa’s Man (Rupa) nominated for the Frank O’Connor International Prize and the novella Tsunami Simon (Ponytale). Yet another collection -The Wait will shortly be published by Penguin-Random House.

Jnanpith Awardee Damodar Mauzo will be shortly felicitated by several Goan organisations at the hands of eminent novelist Amitav Ghosh the first writer to bag the Jnanpith for English, at Ravindra Bhavan, Margao.