The dilapidated state of Adil Shah Palace in Panjim poses a huge threat not only to the commuters passing by the structure but also to over 150 government officials who are working in this erstwhile ‘Old Secretariat’ building. STHRIGDHARA NAIK finds out what led to this gross neglect of the heritage structure and what should be done to prevent any untoward incident in near future 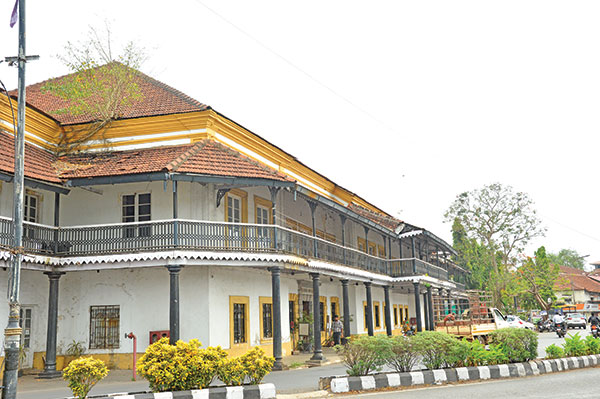 The dilapidated state of the age-old Adil Shah Palace (now Old Secretariat) located in the heart of the capital city is shouting for attention raising multiple questions. Not just the wooden beam hanging from the first floor of the building is posing threat to the commuters but also the ramshackle condition of this Palace is risking the life of over 150 government officials working in this erstwhile ‘Old Secretariat’ building.

The Old Secretariat Building (OSB) which is now in the possession of the Art and Culture (A&C) Department was handed over to them by the General Administrative Department (GAD) in the year 2006. “The motive behind handing over this centuries old building to the Department of A&C was to renovate it and develop this heritage site as a ‘Centre of Art and Culture’ (International Art Gallery),”  Director of Art and Culture Sagun Velip told Herald.

“The Department of A&C has outlined a detailed map of sculptures, paintings and art work to be displayed in this proposed art gallery. A route map of parking and other facilities was demarcated by taking into consideration the public opinion and suggestions,” said Mate.

The proposal for appointing an eminent London based Museologist was moved and was at the final stage of approval when government in 2017 decided to hand it over to the Kala Academy (KA), Imagine Panaji Smart City Development Ltd (IPSCDL) and Goa State Museum (GSM), Mate added.

Explaining in detail Mate said, “Old Secretariat was renovated by the Goa State Infrastructure Development Corporation (GSIDC) at the instance of the Directorate of Art and Culture to convert the same into a centre of art by establishing museum and art galleries in the building while maintaining the heritage structure of the building.

“This Directorate had approval from the government to float a fresh Expression of Interest without any preconditions on use of space of the Old Secretariat complex at Panjim for creating a world class centre for art and culture,” he said.

“After obtaining an approval from the Government of Goa, GSIDC had invited M/s ASCM Museum Consultant Pvt Ltd to give the final presentation before the selection committee which was specially formed by the government in the year 2017”.

While the process of converting the Old Secretariat building into a Centre of Art and Culture was underway, the government decided to hand it over to the KA, IPSCDL and GSM. A portion of this building is also handed over to the students of Western Music of Kala Academy and a Media Room,  informed Mate.

Informing about the space allotment, Velip said, a fixed lot of area of OSB was allotted to each of the departments viz KA, IPSCDL and GSM by taking into consideration its heritage value.

Adding Velip said, “While KA has now occupied more than what had been allotted to them, multiple air-conditioning (AC) units have been installed by the IPSCDL in the space allotted to them. OSB being a heritage site, we had clearly instructed them not to punch even a single iron nail on the walls of the building but in vain”, he added.

Informing that the centralised AC units exist in the building, Velip said that the staff and authorities of IPSCDL are turning deaf ear to the warnings furnished to them and are destroying the beauty of this heritage site.

Velip further said that the monthly water and power bills received by the Old Secretariat come to lakhs of rupees. “KA being part of the Department of A&C, its electricity and water bills are also paid by us. Moreover, refusal of IPSCDL to pay the bill amount is resulting in an unnecessary financial burden on the Department of A&C,” he said.

Historian Prajal Sarkhardande demanded that the Adil Shah Palace, a testament to the rich history of Goa, should be declared as a protected monument.

Sakhardande said, "No doubt such historical monuments should be put to an adaptive re-use. “Instead of partly housing the Goa State Museum into the Adil Shah Palace, the OSB should be converted into either an art gallery, Centre of Art and Culture or a full-fledged Goa State Museum to conserve its historical value. The history of Goa should be displayed at the monument sites,” demanded Sakhardande.

Commenting on the negligence of the government to conserve the monuments, the noted historian said, "Such monuments should not be used as the government offices. The general public who fails to understand its value also fails to preserve its historical sanctity. “It is ironic that the government is showing willingness to rebuild the heritage structures destroyed during the Portuguese era but is turning a blind eye at a decade old monument which is situated in the heart of the capital city”, he added.

Arminio Ribeiro, an Architect and trustee of the Charles Correa Foundation believes the government should prepare a master plan about how they are going to reuse the heritage buildings. The plan should be such that the heritage sites are available to the public and not to the few individuals, suggested Ribeiro.

According to Ribeiro though heritage building can be ceded to the government offices if the office staff is ready to handle this public property with due responsibility, it is not a very good move to make a heritage building pile up with government files and restrict the entry to the general public.

Velip informed that the A&C department has now decided to hand over the structure back to the GAD as per the approval of competent authority. The process of which has already started, he added.

Former Member Secretary of KA, Pravin M S Barad said they had written to the Department of A&C to instruct GSIDC to conduct the inspection for repairs and maintenance of the first floor of OSB.

“Taking cognisance of dilapidated state of the building posing danger to its occupants, especially the staff of Kala Academy and students of Western Music during his visit to the Old Secretariat in September 2021, Minister for Art and Culture Govind Gaude, who is also Chairman of KA had instructed officials to carry out the inspection of the OSB”.

“The Public Works Department (PWD) in its reply stated that the possession of OSB was with GSIDC for major renovation and maintenance and the same has not been handed over to PWD”.

To learn about the current status of OSB, Herald contacted the present Member Secretary of KA, Vinesh Arlekar, who failed to furnish any concrete answer on whether any such repair and maintenance work is going on in the premises and if any reply regarding the repair work has been received by the KA from Department of A&C.

The Adil Shah Palace which was built early in the 16th century by Yusuf Adil Shah was transferred and taken under the State rule after the liberation of Goa. Located across the Mandovi river, initially built to serve as the summer retreat for the ruler was later converted into the State Legislature building for the government of Goa.

Director of CCF Nondita Corea Mehrotra said the heritage buildings are not just the marbles, tile and cement but is the structure which has sustained for ages years depicting the ancient culture. Heritage provides clues to our past and how our society has evolved. It helps us examine our history and traditions and enables us develop awareness about ourselves and therefore should be treated with a great care.

Just because you are a government employee and allowed to use the space doesn’t mean you can do whatever changes you want to, added Nondita.

Archaeologist Sawani Shetye said, “Being a historophile, I would demand GSM be permanently shifted to the new premises free from traffic congestion, sufficient parking space, spacious location mitigating issue of dearth of space and many such factors.”

According to Shetye, an adaptive re-use of historical monuments with due care should be permitted subject to the conditions. Government utilising the historical structure for its own need (such as reusing the premises by handing it over to the government offices) is acceptable if the government is prioritising to maintain its historic originality intact.

Heritage activist Heta Pandit condemned the act of defacement of the Adil Shah Palace by the government office staff working there. “Historical monuments are designed for the local climate. It is our sole duty to conserve the beauty of these sites. Does it make any sense to puncture walls, block off windows, put in false ceilings on a beautiful river fronting Adil Shah Palace?,” she asked.

Pandit said the first thing any custodian should do is to take a complete stock of the heritage property and then decide what use is best suited for the property and then should come up with its conservation plans. “If there's more than one use, all must blend and should be such that they are compatible with one another”, she added.