Dhargal villagers in the dark over venture

The Goa Cabinet has approved the long-pending Entertainment City project at Dhargal. While the details of the project are not yet made public, the government plans a Rs 1778 cr city in the village. ASMITA POLJI discovers that Dhargal locals fear that the company entrusted with building the entertainment city has interests in the casino industry, but the State is expecting a boom of investments and revenue 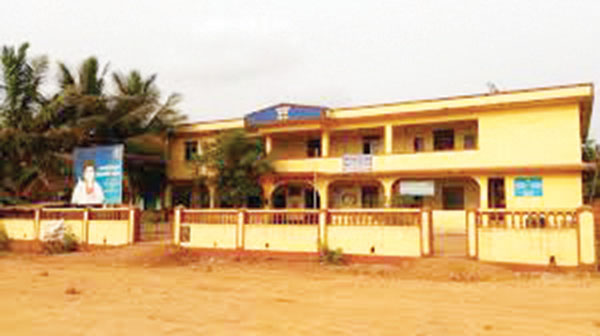 The news of an entertainment city in the taluka has yet again awakened alert citizens and organisations in Pernem taluka. However, on the other hand, many people, including the villagers of Dhargal where the project is supposed to have been planned, are still reportedly ignorant of the project in their rural village.

In January 2020, active villagers and organisations, especially the Pernem Citizen Forum had raised their objection to a casino project in Pernem taluka. The Forum had also created awareness amongst the people regarding such a project by holding corner meetings and distributing pamphlets. But the issue went out of focus after Covid-19 pandemic hit the State.

However, as the entertainment city has got clearance from the Investment Promotion and Facilitation Board, villagers now fear that a land-based integrated, casino-cum-hospitality project may come up in the village. Delta Corp that has got clearance for an entertainment city has claimed that this project will boost tourism and generate employment for over 4000 persons. 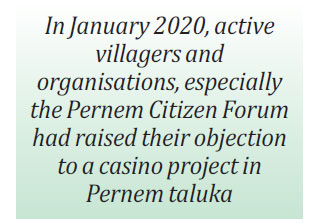 Earlier, in January 2020, Dhargal villagers had objected to such a project fearing that it would be an on shore casino. However, now the locals have learnt that this project will include other services too. Reliable sources said that the company has acquired lakhs of square metres of land at Sukekolan in Dhargal village for the said project and the company has constructed a compound wall after obtaining NOC from the local panchayat. 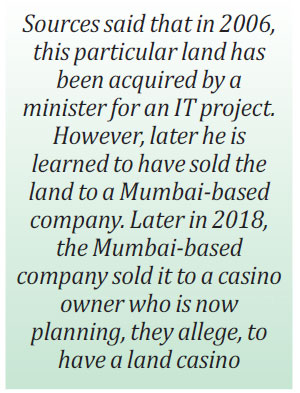 Sources said that in 2006, this particular land has been acquired by a minister for an IT project. However, later he is learned to have sold the land to a Mumbai-based company. Later in 2018, the Mumbai-based company sold it to a casino owner who is now planning, they allege, to have a land casino.

Member of Pernem Citizen Forum Rajmohan Shetye said, “If government wants casinos to run legally in the State then it should also legalise local gambling and matka. This government is forcing such projects on the people even when the people are objecting to it."

Bharat Bagkar another member of  the Pernem Citizen Forum said, "The said land mentioned in the proposal is mostly agricultural land most of which is an irrigated area under the Tillari Irrigation. Delta Corp is in the casino industry and when the government department has approved this particular project in Dhargal area, people are worried about it especially because it could lead to casinos and allied activities that will have an adverse effect on the natural, cultural, educational heritage of the village."

"Robberies, prostitutions, fights, nudism, gambling, smuggling, etc, will increase rapidly and the identity of Dhargal village and surrounding areas will be at risk. People supported Mopa airport assuming they will get employment opportunities at different levels but till now there is no planning of providing required training in institutions where the human resource is trained. Once the airport activities starts, people outside Goa will get the preference as Goa youths from Pernem in particular will not have required qualification. From this phenomenon one can say that the airport will be beneficial to the land mafias, casino industries and so on. So I appeal request each person from Dhargal and Pernem to oppose the proposal for this gaming zone and for casinos or the future generations will not forgive us,” Bagkar added.

The villagers of Dhargal and the people of Pernem are still wondering what the project will encompass. That’s something the government has to be clear about.