The State of Goa is attracting national and international attention due to the Save Mollem campaign by activists and active citizens to save around 70,000 trees, which will be destroyed for the three linear projects - Double tracking of railway line, 400 kv transmission line and the widening of National Highway 4A. The people of Goa are unitedly fighting to protect the State's wildlife resource, so much so, that an entire night was spent on the tracks by them to stop the double tracking project. Unfortunately, the Environment Impact Assessment (EIA) study undertaken for the three infrastructure projects - double tracking of railway line, power transmission and highway expansion- passing through the protected area of Bhagwan Mahaveer Wildlife Sanctuary and Mollem National Park- does not speak about any major impact on the environment and the biodiversity. It has, even then, proposed series of mitigation measures, while claiming that the projects will be a crucial developmental link for the nation. While the people in Goa allege that the proposed double of South Western Railway (SWR) line is for coal transportation, the EIA makes a specific reference to iron ore movement to Bellari in Karnataka.SHWETA KAMAT brings out the observations made in the EIA and the mitigation proposed by the project proponents. 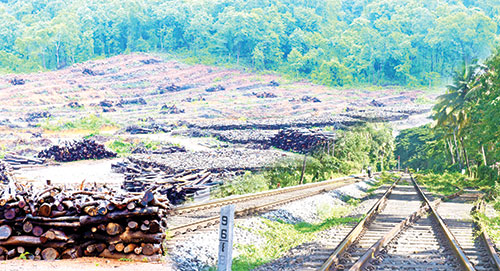 At present demand of Goa is mainly catered through Mapusa 3x315 MVA, 400/220 kV substation, which gets its feed from the Kolhapur 400 kV substation through a 400 kV D/c line.

The project is a part of “Additional 400 kV feed to Goa and Additional system for Power Evacuation from Generation Projects Pooled at Rajgarh (Tamnar) Pool”.

The Transmission line route passes through the Bhagwan Mahaveer Wildlife Sanctuary (BMWS)-intercepts in two sections. At first it enters the BMWS near Surla Village and then secondly it enters ahead of Tambdi Surla Temple and enters in Karnataka, covering total 11.54 ha area.

A total of 25 transmission towers are to be erected for the entire stretch within BMWS.

The entire stretch of transmission line route is a green field area. The core and buffer areas are demarcated as following.

Core Area: The transmission line route, the tower locations (with activity areas of 10m radius) and the Right of Way (23m on each side from median of the line route) is considered as Core area for biodiversity assessments.

In study area six (06) species were found to be threatened of which four (04) arboreal species occur in forests and two (02) herbaceous species were observed growing on lateritic outcrops.

A total of 12 endemic plants were reported of which four (04) are herbaceous; three (03) are climbers and five (05) are tree species.

The proposed transmission line project is estimated to acquire a total of 11.54 ha area of the Sanctuary which would result in the loss of forest habitat, change in species composition and change in abundance of faunal groups of the overall project area.

Section 1 of Transmission line falls in the lateritic plateaus habitat with west coast semi evergreen forest areas in fringes. The transmission tower locations are in the forest habitat. This section requires 2.53 ha of forest land to be diverted.

Section 2 of the transmission line falls in the west coast semi evergreen forest, west coast tropical evergreen and the moist deciduous forest area. The tower locations are in the dense to very dense forest area. This section required diversion of 9.01 ha of forest land area.

--
Mitigation measures
* Habitat disturbances to be kept at minimum by using existing trails for transportation of man material and machinery
* Any vegetation clearance required should be limited to the minimum area required for such passages
* Compensatory afforestation in the area should be undertaken
* Alternate mode of transportation such as Rope-ways should be considered were ever feasible to the maximum extent
* Tree enumeration for clearance should be undertaken in presence of trained botanist in order to seek guidance to avoid, restore and replant species of conservation significance such as IUCN listed threatened species, endemic species and medicinal plants
* Construction activity, man and material movement should be limited to the day time and early morning, late evening and night activity should be completely avoided to allow the unrestricted wildlife movement
* No night stay at the construction site should be planned, proper planning of day work should be done
* Movement within the wildlife area should be entirely regulated, each work force should be trained in do’s and don’ts and how to deal in a situation of wildlife encounter before entering the wildlife area,
* Tree felling should be in compliance of all the statutory requirements, tree felling in the nesting season should carefully examine the active nest on trees before felling, relocation of active nest should be undertaken
* Hunting, trapping and poaching by the employed work force should be completely banned
* On the approach road to the road end (Tambdi Surla Temple End) from the Sancordem to Mollem road, the driving speed of vehicle should be kept below 30km/hr as there are chances of road kills in this stretch;
* Proper housekeeping of the construction areas should be followed during and after construction phase is completed.
* The vegetation clearance along the RoW (right of way) of the transmission line will create a canopy break for the arboreal mammals (Tree dwelling) construction of canopy bridges at key locations (where such canopy breaks are very evident)
* Slope protection and soil conservation measures such as working in non-rainy season, contour ploughing and mulching should be undertaken so that contamination of natural streams in the vicinity are not impacted
* Construction noise from working of man and machine should be regulated. Working hours within the sanctuary area should be from morning 8 am to evening 5 pm.
* Independent monitoring agency (preferably a local wildlife NGO) should be appointed to oversee and guide the mitigation measure implementation
Mitigation for Operational Phase
* Any routine and corrective maintenance schedule planned should be undertaken only after prior information to the forest department;
* GTTPL should make arrangements for dedicated personal from forest department, trained in dealing situations of wildlife encounters, movement, rescue and rehabilitation (preferably reptiles and mammalians) while under taking such routine visits
* Pre nest search before commencing any pruning and lopping to be undertaken;
* Artificial nest boxes along the transmission line route to mitigate the loss of nesting sites along the transmission line route
* Periodic review of condition of canopy bridges and undertake required maintenance;
* Installation of bird diverters on the conductor and perch rejecters on transmission tower along the transmission line corridor.
* In addition to the above artificial nesting platform for raptor species to be built along the transmission line at a distance of 200 m
Related news