Empty promises, empty Assembly: No time for debates, just do as you’re told

As Goa celebrates Legislators Day and the country’s Vice President in the State, honouring former legislators, if one tracks the functioning of the past assembly sessions, especially of the present term, it reflects very poorly on the government’s ability to debate and come out with policies that have seen their due share of deliberations in the Vidhan Sabha. In the last year alone, the MLAs met just for 7 days, that too in the beginning of the year with a session being convened in July to meet the constitutional requirement of not having a gap of more than six months between two sessions of the Legislature. Leave aside the role the opposition is supposed to play; they got hardly any time to raise any issue on behalf of the public. ALEXANDRE MONIZ BARBOSA writes about what this means for Goa, on a day when the State is supposedly celebrating a ‘vibrant democracy’ 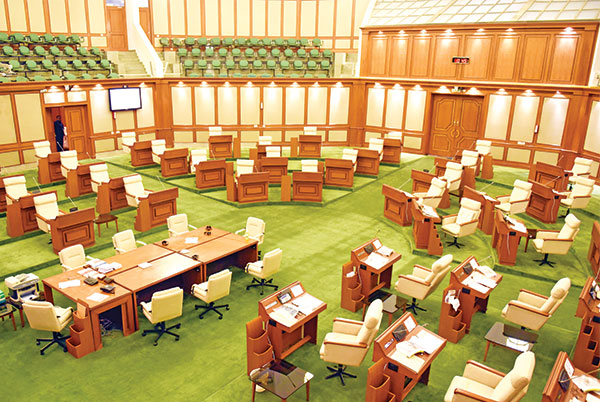 The reason why issues remain pending and the local Member of the Legislative Assembly (MLA), has lots of time on hand to engage in politicking is that he or she spends little time doing what he or she was elected to do – legislate. It is not difficult to work out how much time an MLA spends in the Assembly Hall. The data is on the website of the Goa Assembly and accessible to anybody with an internet connection.

So, do the calculations and discover for yourself that the MLA you elected four years ago has till now, on an average, sat in the Legislative Assembly for just a day and a half per month since the current Assembly was constituted in March 2017. There have been 12 sessions of the Legislative Assembly, and 72 days of sittings, that works out to 1.5 days in 46 months. Given these figures, can any Member of the Legislative Assembly be expected to perform at his best if he or she gets such a brief time in the House to raise the issues of the constituents who elected him or her?

Speaking to Herald, former Speaker of the Goa Assembly Tomazinho Cardozo said, “When the number of days of Assembly functioning is shortened, as per me, the people’s voice is curtailed. In particular, opposition MLAs bring the issues of the public and common man in the Assembly. If the Assembly sits for a good number of days, then there is a better opportunity for the legislators to bring the issues of the people before the House and get them solved. This opportunity is done away with when sitting is curtailed.”

Agreeing with him former MLA, former MP and former Union Minister Ramakant Khalap said, “When you reduce the sittings to such abysmal periods, it affects the working of the legislators. I am absolutely disgusted with the state of affairs. It is true that we have a COVID pandemic situation, but could you not meet online? How many of us are there? Merely 40 and that House can accommodate all with social distancing.”

In the last year 2020, the Assembly met for just seven days. The COVID-19 pandemic restrictions ensured that the sessions were curtailed totally. In July, there was a single-day’s session held, which was called only to meet the Constitutional requirement of not having a gap of more than six months between two sessions of the Legislature. While that one-day session fulfilled the legal requirement, it did nothing to change things for the people. On that one day, the Assembly transacted a record amount of business. As the opposition walked out, the State Budget and Demand for Grants, and 11 government bills were passed, without any cut motions or discussions. This can be termed an aberration due to the prevailing pandemic conditions, but the record for sittings haven’t been any good for Goa. 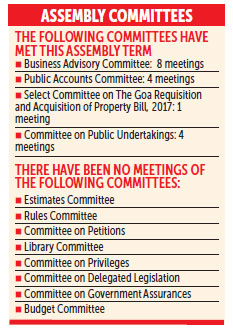 Is this a healthy trend for democracy? Most would concur that it is not. Political commentator Cleofato Almeida Coutinho said, “According to me, they are merely meeting a technical formality and this is a very serious issue. The Business Advisory Committee has to somehow recommend that the days be increased. It all depends upon the politicians. Somebody has to do it and action has to be taken at the national level, as this is across the country.”

Khalap, was clear that reducing the number of sittings of an Assembly affects democracy  as Assemblies and Parliament are forums for public representatives to highlight the issues of their constituencies and of the State and of the Country, both in respect of internal problems and external challenges.

“The government is attempting to meet the bare constitutional requirement of meeting once in six months. You have seen how budgets and legislations have been passed in the past. It’s a mockery, a sad commentary on the State of affairs. I fail to understand how the people of Goa and the political parties are so poor in responding to this situation,” Khalap said.

Almeida Coutinho took the argument further. “It is bad, not just because of the curtailing of the sessions, but also because nothing is going to the Select Committee now. Every Bill is brought before the House and passed. And, both at the Centre and the State, Bills are being bulldozed,” Almeida Coutinho told Herald.

Explaining the procedure, Almeida Coutinho said, “The Parliament does not do much work. It is the select committees that do all the work, which is not happening now. The Select Committees are not meeting as nothing is being referred to the Select Committee.”

A Select Committee is formed to examine a particular Bill and is disbanded after its task is accomplished. In the case of Goa, only one select committee was formed since 2017. This was on ‘The Goa Requisition and Acquisition of Property Bill, 2017’ and it held one meeting only.

The bottom line is that the number of days an Assembly meets has to increase, not just to give the MLAs an opportunity to raise issues but to also discuss government bills. Take for instance, the current ordinance on the amendment to the Municipalities Act. There is a session coming up this month and it would be the ideal place to have it discussed. By notifying the ordinance, the government met with opposition from the traders and has kept it in abeyance. The best option is to have such important amendments to Acts decided in the House.

“In an ideal democracy, the number of days of Assembly function should be as many as possible. Every six months, the Assembly has to meet. Within the six months, whatever issues are brought by the MLAs have to be resolved. The government too requires time to do it,” Cardozo said.

True. A change comes over the administration whenever an Assembly session is called. MLAs send in questions, place calling attention motions, move amendments to Acts, introduce new bills forcing not just the Legislature Department but also the entire government machinery to get into overdrive mode. Journalists, especially, experience this first hand, as government departments turn back queries stating they are busy preparing for the Assembly session.

“Curtailing of the Assembly sessions is not advisable and not in the interest of democracy. Much is reported in the media, but it has got no meaning compared to the statements made in the Assembly, therefore any issues, which are relevant to the people, if it’s discussed in the Assembly and recorded, then the government is bound to take action as directed by the House,” Cardozo explained.

Term after term, the Goa Assembly days of sitting are dropping. The average days, an Assembly has sat since the first election after Statehood is 126.5 days. The current term is unlikely to meet that average number of days, unless there are extended sittings in the next 13 months. The highest number of days the Assembly has sat is 152 days, in the fourth assembly from 2002 to 2007. Ironically, the most sittings on an average were held in the truncated Assembly of June 1999 to February 2002, when the Assembly was summarily dissolved and elections called, after two years and eight months.

As per the recommendations of the National Commission to Review the Working of the Constitution (2000-02), headed by former Chief Justice of India MN Venkatachaliah, State legislatures with less than 70 members should meet for at least 50 days a year and other Houses at least 90 days. Goa, with 40 members therefore should be meeting for a minimum 50 days in a year, but this Assembly term could create a record as it could wind up meeting just over 100 days in five years, when as per the recommendations of the Venkatachaliah committee it should have completed those days in two years.

Now a Minister, Michael Lobo, during his stint as Deputy Speaker had gone on to say that in a short Assembly session, the quality of debate suffers, as every member of the Assembly wants to be heard, but each gets just four or five minutes to speak, which is not sufficient time. While the opposition would love to corner the government, but is denied the opportunity due to a lack of time; the Legislative Assembly also discusses bills, amendments to Acts and resolutions. Besides, MLAs have the opportunity to raise questions in the House and get answers and assurances from the government. Is the time sufficient?

A legislature that does not work as it is expected to ends up demoralising the electorate and weakening the democratic structure. Yet, as Goa celebrated Legislators Days on January 9, it boasted of just how vibrant, democracy is in the State. Vice President Venkaiah Naidu felicitated past legislators of the Third Assembly, but Goa has come a long way since the third Assembly was constituted. It was at that time a Union Territory, it’s been a State for over three decades, and its Assembly has seen very few sittings in almost all the terms.

Short sessions of the Legislative Assembly result in truncating the democratic practices and its traditions. The Legislative Assembly needs to meet for longer periods, so that a proper debate on issues affecting the State is ensured. It is in the Assembly that the legislators have a voice, and Finance Bills like the ‘demands for grants’, need to be discussed over a longer period, perhaps just a department or two per day. This of course doesn’t happen, and often there are seven or eight departments that are taken up on the same day. In the same manner, government bills are sometimes passed giving legislators little time to discuss them. It is time to change this.