Every house having tap connections only a dream, far from reality in rural Sanguem 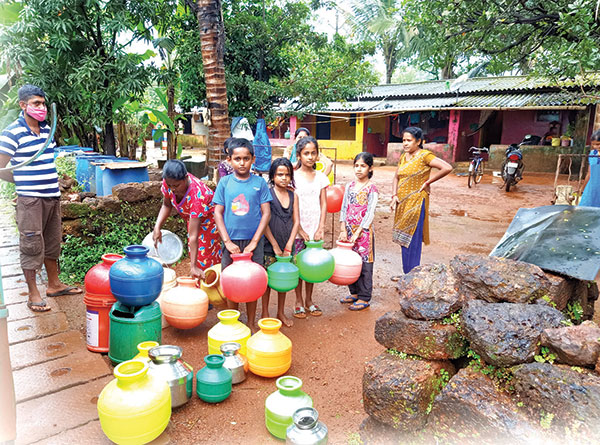 The government claim of every house in the State to be well connected with portable domestic water tap connection is far from reality in many wards of remote village panchayats in Sanguem taluka.

Bodemol ward in Uguem village panchayat, which is located barely around seven kilometres away, is yet to be connected with drinking water supply, making the villagers rely on the public well, to get their drinking water.

Bodemol ward is having a sparse population of around 50 villagers residing in eight houses in the village.

“While the department had made provision for laying of pipeline in the village, water never flowed in the taps installed in around three houses because of pressure problems. For the remaining five houses, the department have not even provided the pipeline,” said Milton Dias, a villager.

The worst situation however prevails in many wards of Kalay village panchayat.

Inquiries revealed that wards as that of Pokormoll, Thorlemoll, Voldanv, Muslimwada and Bondel face drinking water supply on regular basis.

Villagers informed that while in some wards, the department has laid the pipeline, the same is not connected to the main pipeline denying the villagers regular source and supply of drinking water.

The department however makes provision for supply of drinking water to the affected areas through water tankers, informed villagers.

The situation is grim at Pokormoll where the department is yet to lay the pipeline.

Efforts are however on to connect the village with the pipeline through JICA, informed sources at the Water Supply Department Sanguem. However when this will materialise on the ground is not known as final plans of laying a pipeline in the village are yet to be on paper.

In the distant Netravali village, the hilly areas as that of Salgini and Tudov which are abundantly blessed with natural water resources, there are houses that don’t have individual tap connections in the village. “The villagers get their drinking water from springs and other natural resources in the village,” said Deputy Sarpanch Abhijit Dessai.

“At Nunem village, provision to provide drinking water supply to the villagers is made by a private company by spending a sum of Rs 15 lakhs, Dessai added.

A large number of households in the village still continue to procure drinking water from public taps located nearby their houses.

Dessai further added that in the absence of individual tap connection, many families rush to the public taps in the village.

Sources in the department claim that many families in the village have not applied for domestic tap connection over the years as they get free water supply from the public taps, which the department had spared for public use.

Even in other areas in Netravali village, the locals’ daily fill of water supply is received from the springs and streams through water tanks, which are constructed on the top of hilly areas.

“The water supply in most part of Netravali village is sporadic and needs to be improved,” Dessai.