With the onset of monsoons, the villagers of Sattari taluka and traditional farmers are being haunted by the memories of heavy flooding in Valvanti and Mhadei rivers belt during the last two monsoon seasons. The locals from Sattari taluka and farmers suffered huge losses and many houses collapsed while several agriculture fields were inundated. The Valpoi Zonal Agricultural Officers (ZAOs) and other government officials such as Mamlatdar and Talathis conducted site inspection and submitted their reports to the State government for adequate compensation. But till date the affected farmers are awaiting compensation. DEVENDRA GAONKAR spoke to affected farmers to find out the reasons for flooding and government authorities to know what measures they have taken 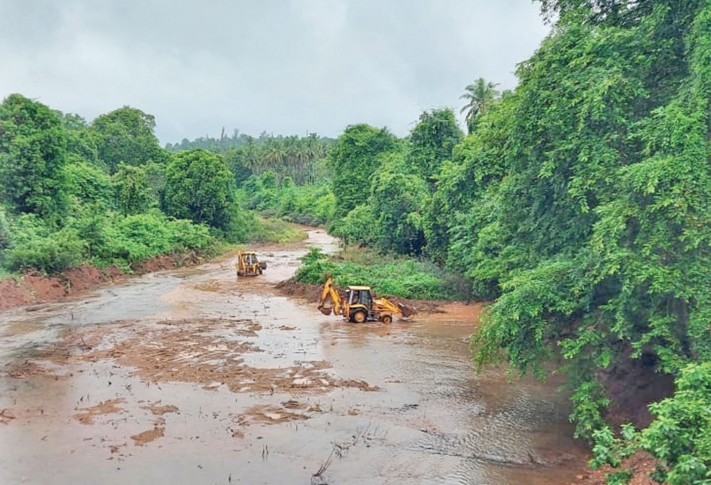 Originating from the Western Ghats, the Valvanti river, which is one of the most important lifeline of Sattari and Bicholim talukas is dying a slow death. Despite Valvanti river flowing from Kerim, Morlem and Poriem Village Panchayats area, the locals from these three villages are facing acute water shortage problems since past many decades and in monsoon the Valvanti river gets flooded due to rampant illegal construction near the Valvanti river.

According to locals, the Water Resources Department (WRD) this time has cleaned the Valvanti river. The WRD officials and engineers saw that waste and dry woods, which was blocking the flow of water was removed for the smooth flow of water during monsoon. But still villagers feel that this time there could be flood like situation because some landlords from Valvanti river area have constructed protection walls and carried out other construction works near river illegally due to which there are more chances of river overflowing.

One of the farmers Ramnath Parab said, “Unwanted things and trees have been felled as part of measures to avoid flowing this year. But we cannot control flood and also we cannot avoid the flood like situation as it’s a natural calamity.”

For last two years there was flood like situation in Sattari which destroyed paddy fieldss badly. “We had informed taluka Mamlatdar, Zonal Agricultural Officers and Deputy Collector. They did site inspection and submitted their reports to government for compensation, But till date we have not received any compensation,” Deepak Gawas, another farmer said.

The unplanned development activities, construction of retaining walls on either side of the river to prevent flooding, destruction of natural vegetation, use of explosives to kill fish, washing of clothes and vehicles, release of untreated sewage water and dumping of garbage have polluted the Valvanti river. The illegal sand mining and non removal of silt from the Mhadei and Valvanti rivers are the reasons for flood like situation in Sattari taluka.

In the absence of scientific garbage disposal facilities in Poriem, Morlem and Kerim village panchayats, villagers dump garbage mostly non-biodegradable waste into the river, thereby polluting the Valvanti river. In 2015, the Ministry of Environment and Forest (MoEF), New Delhi had stated that 93 per cent of river pollution was caused by domestic waste and there is urgent need to discourage people from dumping waste into the river.

Since last two years the Mhadei and Valvanti rivers are flooding due to encroachments. The WRD did carry out disilting work to correct the remedy but still the villagers are apprehensive complaining that the work was done in a wrong way and that retaining walls have been constructed all without proper planning. The villagers complained that several trees were cut on both sides of the river bank and also due to concrete work on both sides of the rivers, there is possibility of degrading of environment and damaging the lifeline of the State.

According to environmentalist Rajendra Kerkar, the mechanism which has been followed by the WRD is totally wrong. There is a need to protect the natural course of the river. Like the coastal regulation zone plan in same way the WRD should have identified the river protection zone. There is no provision in both, State and Central laws wherein bank of rivers give protection.

However, WRD engineer Aziz Shah had something different to say. “This time we have cleaned all the nallas and also cleaned the brides at Velus, Hedode, Massordem and Nanus. Also we are demolishing old bandhara at Ganjem, which was built in Mhadei river in Ganjem village long ago, as it is creating many problems in monsoon and also many uprooted trees were stuck and were blocking the natural flow of water. Due to this Mhadei river water was entering in Ganjem village during incessant rains. So we have demolished the old Ganjem bandhara. From over side we have completed all works to avoid flooding like situation in Sattari taluka during heavy rainfall, but we cannot avoid natural calamities.”

When contacted, Sattari Deputy Collector Pravin Hire Parab said that human being cannot control flood like situation directly. The Water Resources Department has to raise the alarm. The Mamlatdar and Deputy Collector should respond immediately. We should never wait for the last moment or last minute. All the officials of concerned departments also have knowledge of flood like situation and should share it so that we will respond it quickly. And we will work in such a way that if a flood like situation arises then there must be no loss. Our resources, pockets we have identified it and sub division plans with all the information have been provided.”