Fish, politics and the fight to retain traditions 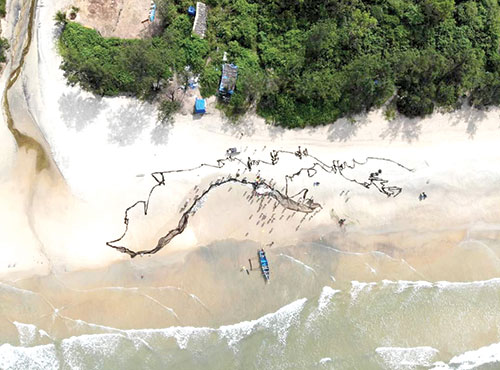 There can’t be a more quintessential Goan image, a fisherman, rowing out to the sea rowing his boat or casting his net at sunrise or sunset. At the beginning of the twentieth century, they were just plain boats with no mechanics and life was simple and bountiful with enough fish to fulfill the need of each village.

In 1970-71 mechanized fishing first started to merely help traditional fisher-folk. The idea was to enable these boats to venture out a wee bit further. But these boundaries were soon breached. Even then some fishermen decided to enhance the size of their motors proportional to the size of their expectations. And this is when the first line was drawn between the non-motorised and motorized fishermen. During those early days, the leadership of protecting the rights of traditional fishermen fell on Piedade Fernandes of Velsao, whose home still stands in the village where his son Jose Agnelo Fernandes and daughter-in-law Maria Fernandes live.

But no story of traditional fishermen can either begin or end without the (late) Matanhy Saldanha. According to the old-timers and ratified by his nephew, Olencio Simoes as well as GRE President Agnelo Rodrigues of Velsao, Saldanha entered the scene in 1974, to agitate against the dumping of effluents into the sea allegedly by Zuari Agro Chemicals. “The Country’s first agitation against environmental pollution, wherein dangerous chemicals were leached into the soil leading to a major threat to marine and human life, forced the Central Pollution Control Board (CPCB) to set up a State unit in Goa under the Water Prevention and Control of Pollution Act 1974,” recalled his wife and former Environment Minister Alina Saldanha speaking on the silver jubilee function of the Goa Pollution Control Board (GSPCB).

Later, Matanhy Saldanha united fishermen across the board to keep mechanized fisher boats at bay, especially those who indulge in bull trawling and purse seine fishing.

And then in 1977 the Goenchea Ramponnkarancho Ekvott (GRE) formed by Matanhy moved the Supreme Court with a battery of legal luminaries fighting for them like Eduardo Faleiro, Uday Bhembre and Anthony Pinto.

Over the years, and especially after Saldanha’s passing, his nephew Olencio has been leading the struggle as best as he can. There are still meetings help regularly, often on the beach and in orchards, with the realisation that the era of traditional fishermen may fade if the next generation doesn’t continue the heritage. For example, the daughters and only son of Jose Agnelo Fernades, grandchildren of the first ramponnkar leader of Goa, Piedade Fernandes are in the UK and Mozambique.

Literally, all of them who have migrated abroad have Portuguese passports with very little inclination to come back carry our traditional occupations. “But we can’t give up. How can we forget ‘jail bharo andolans’, chain hunger strikes to protect the rights of traditional fishermen”, recalls Agnelo Rodrigues, the grand old man of the ramponnkars in Velsao and the GRE President.